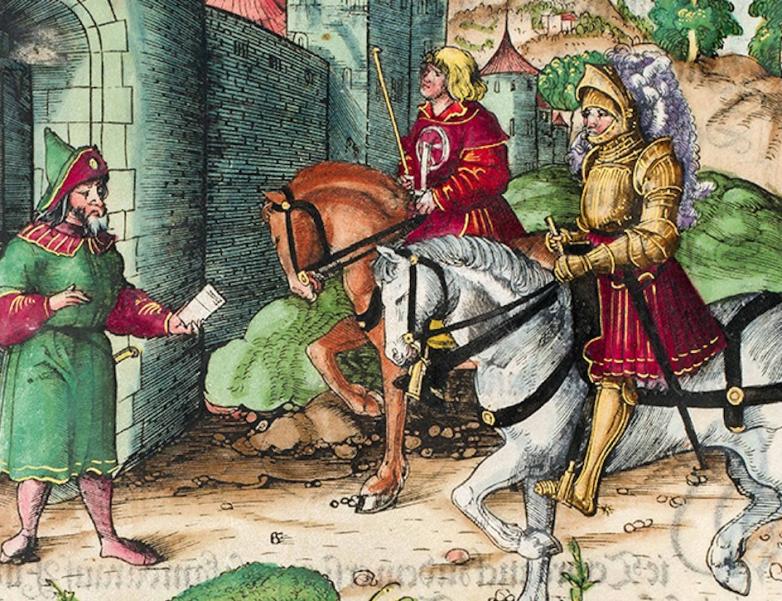 One of the two catalogue items, this first edition of Emperor Maximilian I’s Theuerdank is both vibrant and historically fascinating. The epic celebrates Theuerdank (Noble Mind), a knight who represents Maximilian himself. Overcoming innumerable dangers to win the heart of Queen Ernreich (an allegory for Mary of Burgundy, daughter of Charles the Bold), Theuerdank is impeded by meddlesome military figures who wish to disrupt his quest. 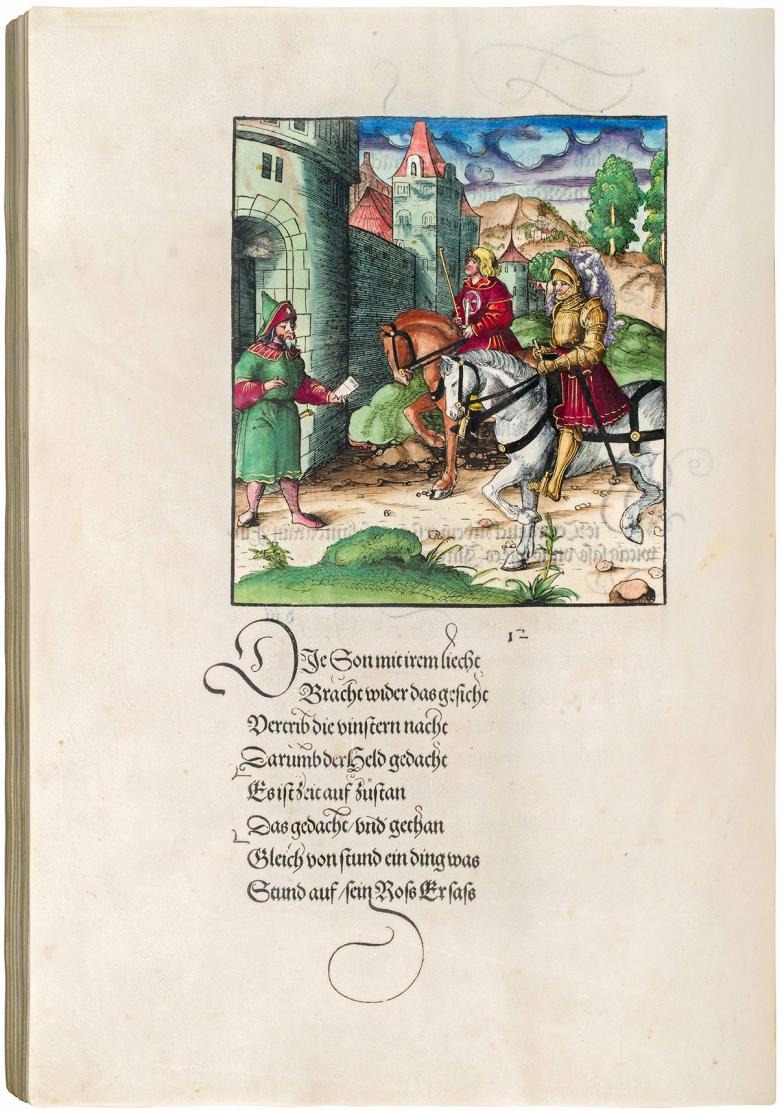 Presented on vellum with luxury colouring and illuminated with silver and gold, this ‘Princes’ copy’ has the touch of the Emperor on its very pages. Maximilian appointed Johann Schönsperger from Augsburg as his Imperial court printer and carefully controlled the printing and typography in order to craft a work worthy of his image and dynasty. The special type developed, a fraktur with forms derived from the Imperial chancellery script and embellished with flourishes, accompanies 118 woodcuts which have been called the finest of German Renaissance book illustration.

These scenes of adventure were designed by some of the best-known woodcut artists of the time – Hans Burgkmair, Hans Schäufelein, Leonhard Beck, and others – and the compilation of the cuts, begun in 1511, took until 1517 to complete. Unlike its inclusion in the Stuttgart Antiquariatsmesse, however, this book was not initially intended for sale: the Emperor rather meant it as a memorial of his great achievements, taking many years to fine-tune its stunning design. Though 40 copies of the first edition were printed on vellum, only a few were coloured.

The second of the ceremonious texts included in the Stuttgart catalogue is the Vita Christi by Ludolphus Carthusiensis, translated into French by Guillaume Lemenand. This copy is the second volume of the work, which was commissioned by Philippa of Guelders, wife of Duke René of Lorraine, around 1505. Again, this is a commemorative work, serving to showcase the Duchess’ family prestige and devotion to Christ.

This volume was executed by the Master of the Chronique Scandaleuse, a renowned royal artist. The Master was sure to include identifying details in his intricate paintings, adding the full arms of Lorraine and the combined letters PR for Philippa and René in the border of the first miniature, which shows Christ preaching.

Though the iconographic program for the illustration of the Vita Christi was an established tradition in 15th-century French book illumination, the Master of the Chronique Scandaleuse has a distinctive, regal style. With a palette of clear, strong colours and liquid gold, each figure is dressed in sumptuous garments and jewelry, their faces expressive and lively to communicate emotion.

We looking forward to sharing these books and manuscripts with you at the Stuttgart Antiquariatsmesse this January, and hope to see you at an in-person fair very soon.