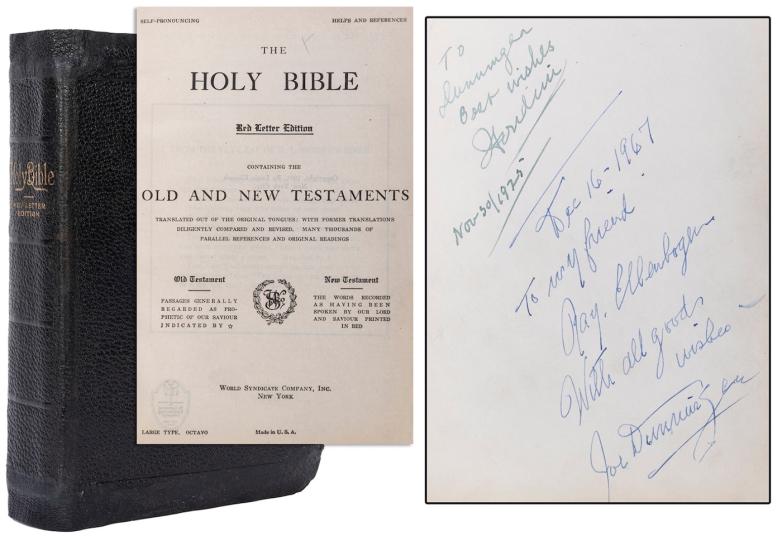 The breakout item in this sale was lot #293, Harry Houdini's (Hungarian-American, 1874-1926) Bible which sold for $102,000 - more than four times its high estimate!
·       We believe this sale reflects a world's record price for a book signed by Harry Houdini. This 1901 Red Letter edition was published by the World Syndicate Company of NY and was configured to enable the magician to read the mind of a spectator with total accuracy. When a volunteer flipped to any page, the performer could instantly determine which chapter and verse that person was reading. This illusion was inscribed and signed by Houdini: “To / Dunninger / best wishes / Houdini / Nov. 30/1925.” and again by Dunninger in 1967 to noted Houdini collector Ray Ellenbogen.

As expected, materials with provenance to magician Joseph Dunninger (American, 1892-1975) took several of the top slots in this early winter event.
·       Lot #21, a Dunninger scrapbook and research archive, was estimated at $1,500-2,500 and made $5,520. The scrapbook consisted of c. 400 pages of ephemera related to magic, the supernatural, ghosts, spiritualism, and associated topics. It was sold along with a research focused collection of materials and notes regarding Dunninger’s life and career, spanning his earliest days to his final moments.
·       Lot #18, Dunninger’s gold and diamond cufflinks from c. 1930, was estimated at $1,000-2,000 and traded hands at $7,800. These featured the “bat wing” logo of Dunninger’s face designed by Hans Stengel and were hallmarked “HMJ.”
·       Lot #40, Dunninger’s Hypnotic Glasses, was estimated at $50-150 and came into focus at $600. These novelty glasses were made in NY by Honey Toy Industries and featured lenticular inserts with center holes. These were a variant of the classic X-Ray Specs popular in the 1960s.

This sale also featured top shelf, century spanning books related to magicians and magicana.
·       Lot #213, Teller and Todd Karr's two volume House of Mystery: The Magic Science of David P. Abbott, was estimated at $1,500-2,500 and sold for $5,040. This deluxe first edition was printed in LA by The Miracle Factory, 2005. It was number 27 of 50 copies and was signed by Teller, Todd Karr, and Katlyn Breene.
·       Lot #29, Mahlon Blaine's (American, 1894—1969) Nova Venus, inscribed to Dunninger, was estimated at $300-600 and made $2,640. This gilt-stamped cloth portfolio from 1938 contained 40 loose plates of erotic and grotesque illustrations. This example was copy #1 of 300 printed.
·       Lot #189, Le Grimoire, Ou Le Livre de Magique was estimated at $200-400 and realized $3,600. It was published in Brookfield, MA around 1805 and included a compendium of original music, legerdemain accompanied by original drawings, and sections on folklore and superstition which could be read only with the aid of a mirror.

Legacy props and apparatus were also well represented in this well curated sale.
·       Lot #435, a 1990s-era Pyramids of Egypt wine and water trick by John Gaughan and Associates, more than doubled its high estimate to deliver $14,400. This classic illusion, based on the one from Hoffmann’s Modern Magic, enabled wine and water mixed into a decanter to magically separate into two glasses. This well rendered example was only one of four sets produced.
·       Lot #365, the Die Wandernden Münzen (The Wandering Coins) prop, was estimated at $80-150 and rang up $780. It was made in Vienna by Klingl in the 1930s. In this illusion, a stack of coins and a die transpose within a spun metal cylinder.
·       Lot #437, the Blaney Ladder Levitation prop, was estimated at $8,000-12,000 and made $15,600. It was made in TX by Walter Blaney in the 1990s. With this trick, a spectator from the audience lay across a wooden board placed on top of two small step ladders. The ladders were removed, leaving the spectator and the board suspended in midair. The Blaney Ladder Levitation became a staple in the shows of many of the best-known performers in the industry, including David Copperfield and Lance Burton.
·       Lot #438, a 1990s-era Miracle Hoop also made by Blaney, was estimated at $3,000-5,000 and scored $6,600. This 28" diameter, gleaming metal hoop could be passed over a floating assistant in a Ladder Levitation or similar levitation effect.

This event came full circle with ephemera, posters, and other conjuring rarities that bridged traditional auction categories.
·       Lot #286, an 8" tall bronze desk set in the shape of a conjurer performing cups and balls on a draped, folding table, was estimated at $4,000-6,000 and realized $11,400. It dated from c. 1875. Its features included the magician's hat which lifted to form an inkwell or hold a pen, his trumpet which formed a seal, and his trunk which opened to accommodate stamps.
·       Lot #343, The Great Brindamour. Magician, generated $7,200. This full color lithograph from c. 1903 was printed by The Strobridge Litho. Co. of Cincinnati & New York  and measured 27x17-5/8”. It pictured the performer executing his levitation illusion, an assistant suspended in mid-air, rays of light emanating from his fingertips, and gnomes.
·       Lot #285, an archive of midcentury letters from magician Stanley Collins (British, 1881-1966) to fellow a magic historian and collector Jimmy Findlay (1904 - 1973), was estimated at $1,500-2,500 and brought $5,760. This expansive gathering of correspondence included discussions of magic and collecting, opinions on current industry events, and recent collection acquisitions. Collins was notoriously opinionated, and this archive revealed much of his personality.
·       Lot #305, a 1924 S.A.M. 20th annual dinner program featuring Harry Houdini, was estimated at $100-200 and made $840. This four page, letterpress brochure featured a cartoon of Houdini whispering into the ear of The Sphinx on the front cover, and listed Houdini as President of the S.A.M. on the interior.

According to Gabe Fajuri, President at Potter & Potter Auctions, "Items with rock-solid historical provenance - like the Houdini Bible offered in this sale - continue to break records in our auctions. While this object is not the most expensive Houdini prop to be sold at public auction, it comes in second place (perhaps even for any other Houdini artifact sold at public auction, if my memory is accurate), and that's a strong way to finish an already strong year of sales at Potter & Potter."