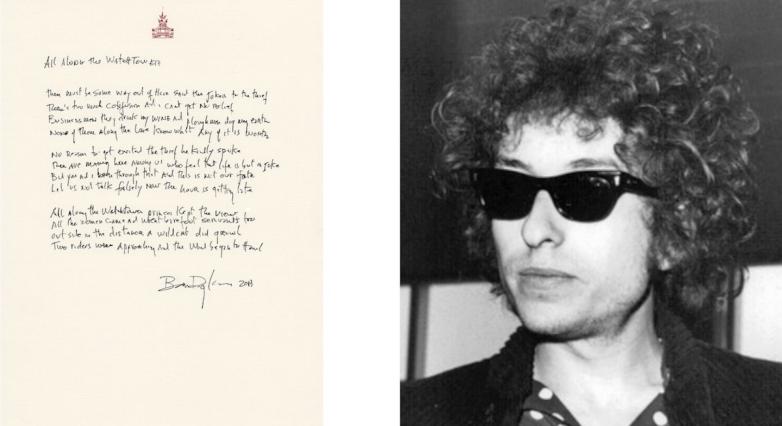 Boston — Incredible handwritten lyrics by Bob Dylan for his song, "All Along the Watchtower," sold for $60,500, according to Boston-based RR Auction.

The lyrics on one page, written in black ink and signed neatly at the conclusion, "Bob Dylan, 2013," are accompanied by a 2014 letter of authenticity from Jeff Rosen, Bob Dylan Music Company president.

Written and recorded by Bob Dylan for his 1967 album John Wesley Harding, "All Along the Watchtower" has become one of the songwriter's most enduring hits—it appears on most of his greatest hits compilations. It has been performed in concert more than any of his other songs.

It earned further acclaim with Jimi Hendrix's recording on Electric Ladyland; of the cover, Dylan said: 'I liked Jimi Hendrix's record of this and ever since he died I've been doing it that way—Strange how when I sing it, I always feel it's a tribute to him in some kind of way.'

The Marvels of Modern Music by RR Auction began April 14 and concluded May 19. For more information, go to www.rrauction.com.