Artists Explore the Transformational Qualities of Paper in Upcoming Exhibition 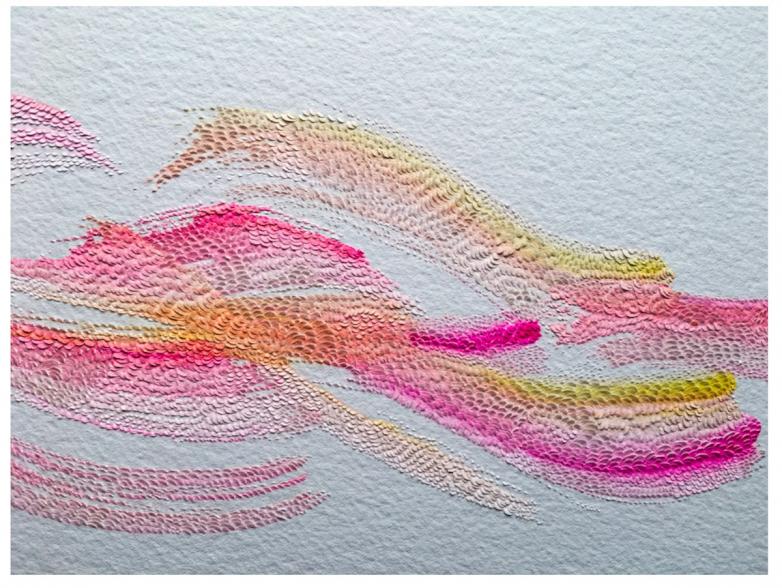 Courtesy of the artist; Photo by Paco Vergachette

Washington, D.C. — Cut, folded, torn, glued, burned or embossed, paper becomes a transformational art medium in Paper Routes—Women to Watch 2020, on view at the National Museum of Women in the Arts (NMWA) from October 8, 2020 through January 18, 2021. Presenting the work of 22 emerging and underrepresented contemporary women artists from around the world, Paper Routes highlights the versatility of paper well beyond its traditional role as support for drawings, prints and photographs with works that range in scale from intimate to immersive. Some featured artists highlight the delicate properties of paper through thousands of meticulous cuts, while others create surprisingly dense and monumental sculptures.

Paper Routes is the sixth installment in NMWA’s Women to Watch exhibition series, which results from an innovative collaboration between the museum and its national and international outreach committees. The 22 committees participating in Women to Watch 2020 selected curators in their regions who created shortlists of contemporary artists working with paper. The curators who participated in the selection of artists for Paper Routes are from major institutions such as the Brooklyn Museum, New York; The Phillips Collection, Washington, D.C.; High Museum of Art, Atlanta; Fine Arts Museums of San Francisco and Musée des Arts Decoratifs et du Design, Bordeaux. From these nominations, NMWA curators selected one artist from each committee whose work will be included in the exhibition. The artists are represented by 12 states and ten countries: Argentina, Arizona, Arkansas, Northern California, Southern California, Canada, Chile, France, Georgia, Germany, Italy, the Greater Kansas City Area, Massachusetts, the Mid-Atlantic Region, New Mexico, New York, Ohio, Peru, Portugal, Spain, Texas and the United Kingdom.

“The Women to Watch program offers an unprecedented opportunity for women artists to show their work, often for the first time, on a national and international level,” said NMWA Director Susan Fisher Sterling. “No other museum outreach effort is so targeted in its commitment to discovering and promoting women artists working today. We are delighted to welcome such a talented group to the museum.”

In cultures around the world, artists have explored paper as a medium in and of itself. Perhaps the best-known example is Japanese origami, whose practitioners deftly fold paper into myriad forms. Other traditions include intricately cut paper like papel picado in Mexico and wycinanki in Poland. The first documented papermaking process took place in China more than 2,000 years ago, but mass-produced paper—created cheaply from cellulose fibers converted into pulp—has been a staple since the 19th century. Today, paper art is a thriving and diverse genre in its own right.

Many artists who work with paper emphasize its ephemeral quality. For Jen Aitken (Canada, b. 1985), paper enables her to create volume without mass. She makes architectural constructions for each new exhibition space, as they respond specifically to their surroundings. The work of Mary Evans (United Kingdom, b. 1963) is also site-specific; she composes large-scale scenes from cutout silhouettes that exist only for a specified timeframe. The disposability of the brown packing paper in her work carries meaning, as Evans likens it to the way in which Black bodies have historically been commodified, used and discarded.

In large quantities, paper can be heavy, unyielding and compact, a property some artists choose to exploit. The monumental sculptures of Angela Glajcar (Germany, b. 1970), created with multiple sheets of heavyweight white paper, demonstrate the inherent beauty of the material. Her hanging work’s feathered edges result from the artist’s tearing process, and the layers of paper create light caverns that contain a play of shadows. Sculptures by Dolores Furtado (Argentina, b. 1977) also rely on the density of material. Inspired by the transformation that paper undergoes from liquid to solid during manufacture, Furtado molds handmade paper pulp into tactile sculptures.

Artists Sa’dia Rehman (Ohio, b. 1980) and Julia Goodman (Northern California, b. 1979) allude to paper’s role in recording the weight of history to reinforce the importance of their subjects. In Rehman’s life-size Family (2017), she uses newsprint to portray her Pakistani American Muslim family, highlighting the discrepancy between her ordinary subject and the imagery of war and violence with which Muslims frequently appear in the media. Goodman plumbs the history of rag sorters to highlight the invisible labor of women who were part of the rag-based paper industry. Taking discarded material from the factory in San Francisco where these women, mostly Italian immigrants, labored until the 1960s, Goodman makes her own paper pulp, onto which she impresses their names.

Paper cutting is a longstanding tradition in paper art and includes silhouettes, developed in 18th-century France, and the art of scherenschnitte, or “scissor cuts,” brought to colonial America by German immigrants. Georgia Russell (France, b. 1974) meticulously slices, slashes and reconstructs old books, music score sheets, maps and other printed materials into lush, tendrilled sculptures and latticed cutouts. Paola Podestá Martí (Chile, b. 1969) re-creates large ornamental façades using thousands of individual laser-cut pieces in the shape of insects to comment on nature’s reclamation of untended historical sites. Likewise, Elisabetta DiMaggio (Italy, b. 1964) uses a surgical scalpel to cut precise and intricate designs on large panels of fragile tissue paper that cover the walls of an entire room.

Paper’s adaptability allows a multitude of techniques in addition to cutting. Applying the art of origami to her practice, Joli Livaudais (Arkansas, b. 1968) prints photographs of personal subjects—family, friends, artwork and objects of beauty—and shapes them into beetles that appear in her work frequently as symbols of spiritual transformation. The time-consuming physical process of folding each photograph fosters introspection and reflection on past experiences. Hyeyoung Shin (Greater Kansas City, b. 1973) draws on Jiho-gibeop, a traditional Korean method of paper casting from objects. In Tide (2019), inspired by the worldwide Women’s March rallies in early 2017, Shin casts individuals’ feet to reflect on the distinct and collective paths that people take as a result of personal and political values.

One of paper’s distinguishing characteristics is its malleability, providing rich fodder for artistic innovation. Annie Lopez (Arizona, b. 1958) uses a cyanotype process to print personally relevant images and texts on tamale paper, sometimes stitching together as many as 40 sheets to fashion her blue vintage-style garments. Inspired by textures and forms found in nature, Echiko Ohira (Southern California, b. 1949), twists, tears, stacks, nails and sews layers of untreated, tea-stained or vibrantly dyed paper for her evocative abstract sculptures.

Paper Routes—Women to Watch 2020 is organized by the National Museum of Women in the Arts and sponsored by participating committees in Argentina, Arizona, Arkansas, Northern California, Southern California, Canada, Chile, France, Georgia, Germany, Italy, the Greater Kansas City Area, Massachusetts, the Mid-Atlantic Region, New Mexico, New York, Ohio, Peru, Portugal, Spain, Texas and the United Kingdom. The exhibition is made possible by Northern Trust with additional funding provided by the Clara M. Lovett Emerging Artists Fund and the Sue J. Henry and Carter G. Phillips Exhibition Fund. Further support is provided by Bayer AG, the Council for Canadian American Relations, and Luso-American Development Foundation. The museum extends appreciation to the Embassy of the Federal Republic of Germany, Embassy of Italy with the Italian Cultural Institute in Washington, D.C.; and the Embassy of Peru in the U.S. Special thanks to the Mississippi State Committee and San Francisco Advocacy for NMWA for their support of the Paper Routes catalogue.

Published by NMWA, the 92-page exhibition catalogue features works by and statements from each Paper Routes artist, as well as an introductory essay by co-curators Virginia Treanor and Orin Zahra.