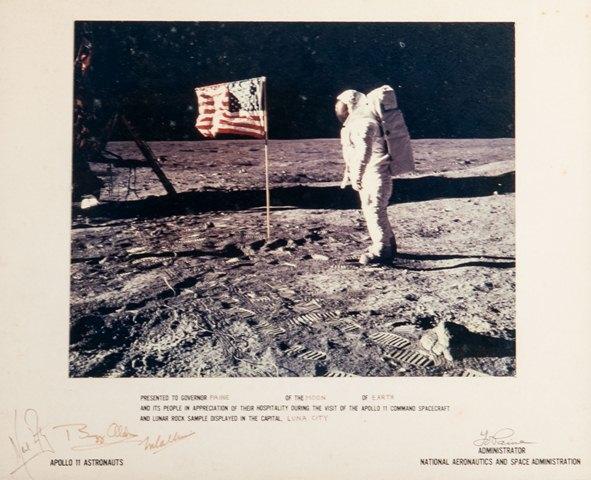 This framed photograph "Man on the Moon” signed by Apollo 11 astronauts Neil Armstrong, Buzz Aldrin, and Michael Collins will be among the U.S. space program memorabilia offered at Abell Auction Company's Oct. 6 live and online sale.

Los Angeles — An exclusive assortment of items from the estate of the late National Aeronautics and Space Administration (NASA) Administrator Thomas O. Paine, who oversaw the U.S. space program during the first manned missions to the moon, will be auctioned on Oct. 6 by Abell Auction Company in Los Angeles. Live bids will be accepted online and at the gallery (2613 Yates Ave.) starting at 10 a.m. PST.

Named the third administrator of NASA by President Lyndon B. Johnson in 1969, Paine served during the first seven Apollo missions in which 20 astronauts orbited the earth, 14 flew to the moon and four walked on its surface. An array of rare NASA memorabilia signed by Apollo 11 astronauts Neil Armstrong, Buzz Aldrin and Michael Collins will be offered, including: