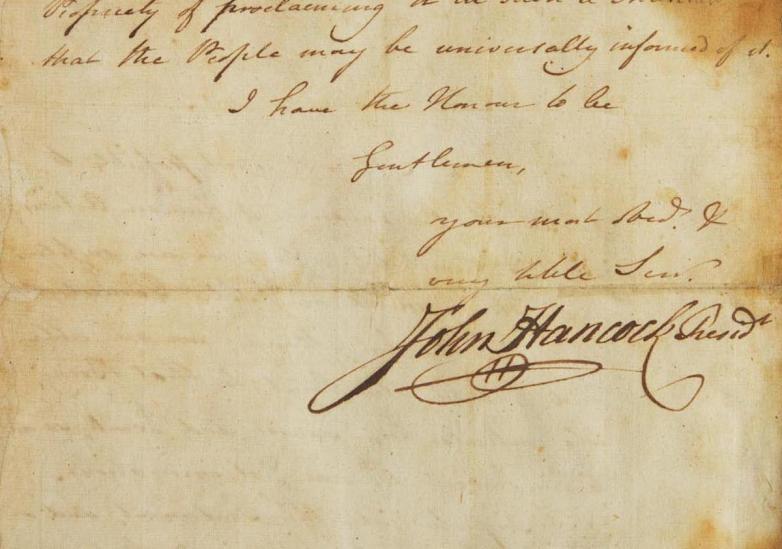 Philadelphia — Freeman’s May 3 American Furniture, Folk and Decorative Arts and May 4 Books and Manuscripts auctions brought collectors a fine array of significant early Americana, from letters and political documents to furniture, silver, and artwork.

The market demand for such items across categories is confirmed by strong results across the board, notably a 1776 letter signed by John Hancock announcing America’s independence, to the state of Georgia, that achieved $1,896,000, and a Chippendale mahogany sideboard table with impressive provenance that sold for $163,800.

In American Furniture, Folk and Decorative Arts, demand for Chippendale furniture crafted in Philadelphia resulted in sale prices that well exceeded their estimates, led by the Pemberton-Morris-Lloyd Chippendale carved and figured mahogany sideboard table that commanded $163,800 against a $40,000-60,000 estimate.

The highlight of Freeman’s Books and Manuscripts auction was undoubtedly the $1,896,000 sale of John Hancock’s 1776 letter to the state of Georgia proclaiming America’s Independence. One of only five such letters to the original 13 states known to exist, the document is extraordinarily rare. Its impressive sale price—the same document sold at Freeman’s in 1924 for $3,000 (about $57,000 today), and at Sotheby’s in 2020 for around $1M—underscores Freeman’s pride of place in presenting rare and foundational pieces of American history at auction.

Competitive bidding between Freeman’s international client base pushed additional significant American documents past their estimates, including a contemporary manuscript of Benjamin Franklin, John Jay, and John Adams’s peace journals during their negotiations with Great Britain to end the American Revolution, which sold for $138,600 (estimate: $50,000-80,000). In addition to political material, a remarkably rare first American edition of Jane Austen’s Pride and Prejudice achieved $21,420 (estimate: $10,000-15,000).