London — A newly discovered banking ledger kept in person by Edward Backwell, whose banking business in the second half of the 17th century was the immediate forerunner to the Bank of England founded in 1694, leads Bonhams Fine Books and Manuscripts sale in London on Wednesday 26 June. It is estimated at £100,000-150,000. 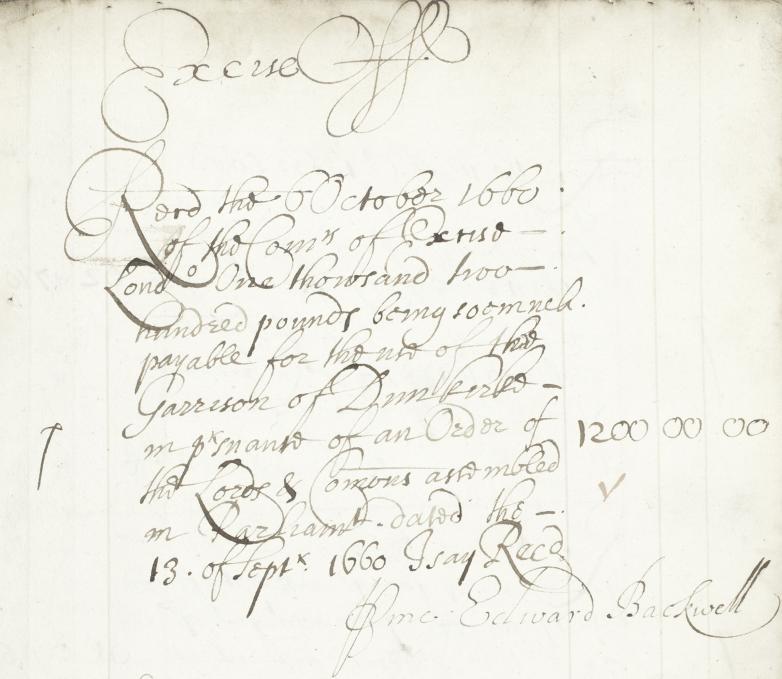 Nine of Backwell’s customer ledgers were already known to exist and are considered so important that they are included in the UK section of the United Nations Educational, Scientific and Cultural Organisation (UNESCO) ‘Memory of the World’ register. UNESCO describes them as “uniquely significant in documenting the finances of Restoration England and the birth of modern banking,” and calls Backwell himself, “one of the financial giants of his age.”

The ledger offered by Bonhams is earlier than those listed on the UNESCO register and is different from the earlier documents in three significant respects:

•    it was compiled under the personal supervision of Backwell himself, and is signed by him in a number of places
•    it is a working document – unlike the nine later ledgers which were copies made by scribes – and bears the signatures of the people who received the money or their agents.
•    it confirms that Backwell acted as banker to the government; and was performing some of the functions of a central bank fully three decades before the establishment of the Bank of England.

This ledger which covers the period August - March 1660 shows Backwell administering the finances of the Excise which collected duty on home-produced goods such as alcohol and imported commodities e.g. tobacco. Essentially, this involved paying the salaries and expenses of tax-collectors, making Backwell the HMRC of his day.

The ledger also shows that Backwell acted as paymaster to the House of Commons, paying the wages of its staff. Additionally, at the order of the Commons, he paid stipends to the great officers of state. These included George Monck, Duke of Albemarle the soldier who played a key role in the restoration of the monarchy, and Charles II’s younger brother James, Duke of York, who later became King James II.

When the Bank of England was established in 1694, Backwell’s cashier general Thomas Speed was appointed its Chief Cashier and was the first person authorised to issue bank notes. The newly established central bank provided the resources to rebuild Britain’s navy. The consequent drive to develop new materials and new manufacturing techniques acted as the catalyst for the Industrial Revolution and the founding of the modern economy.

Consultant Felix Pryor who catalogued the ledger for Bonhams said, “This recently unearthed document is an extraordinary and major discovery. It sheds new light on the crucial role of banking in the making of the modern state, and provides a deeper understanding of the origins of Great Britain’s global economic dominance during the 18th and 19th centuries.”