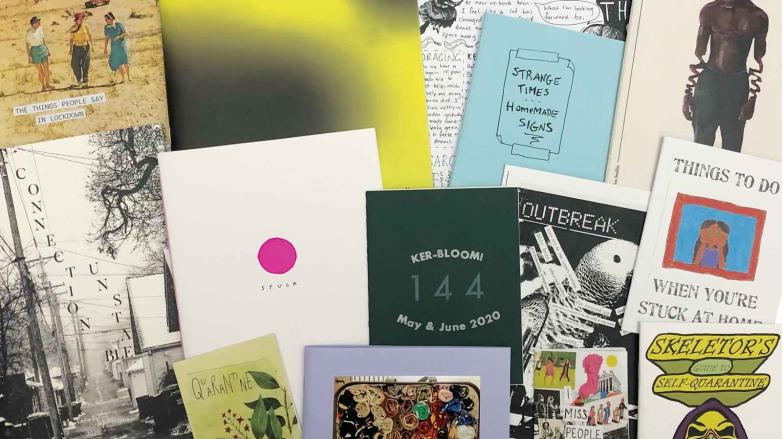 A selection of zines produced during the Covid-19 pandemic and collected by The Ohio State University’s Rare Books & Manuscripts Library.

Collectors familiar with The Ohio State University’s Rare Books & Manuscripts Library (RBML) are most likely to know about one of our longstanding collection strengths, such as the Charvat Collection of American Literature (one of the best holdings of first editions of American literature in the US, named for Ohio State English professor and literary scholar William Charvat) or the James Thurber Papers, the largest manuscript and comic art holdings in the world of the New Yorker writer and cartoonist. We love sharing these materials with researchers, classes, and visitors, but we are also excited to highlight some of our current collecting priorities and the ways we are expanding and diversifying our holdings. Case in point: our zine collections. 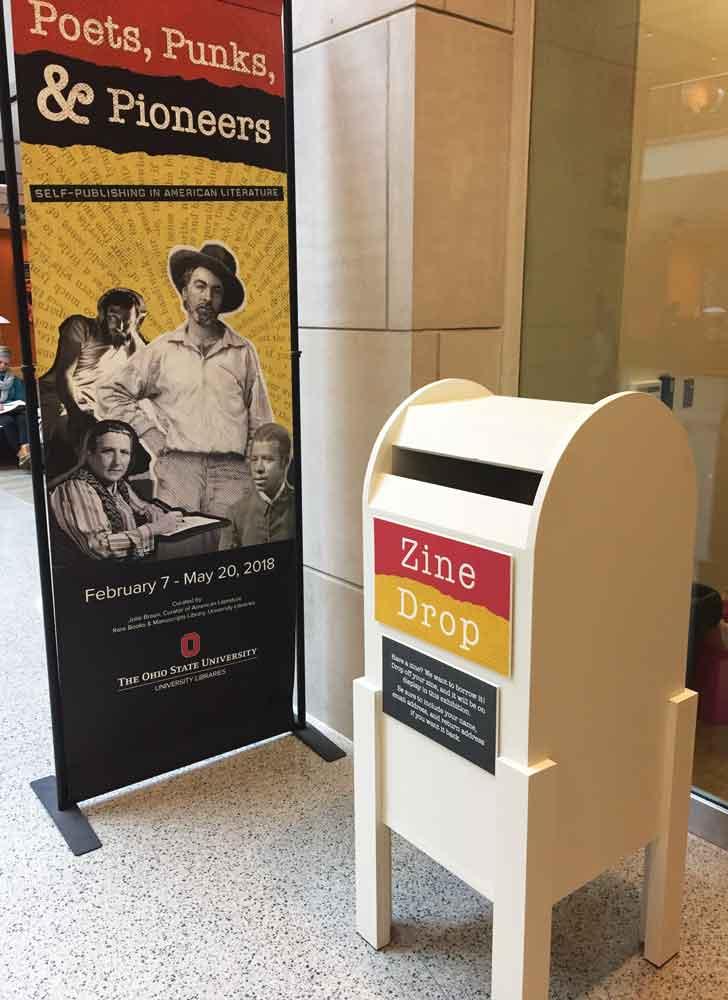 To coincide with a library exhibition on self-publishing, a zine drop box was installed, allowing anyone to share their zine, which would then be displayed in the exhibit, made available for visitors to read, and added to the library's zine collections.

When I began my position as curator in 2016, I was excited to discover some zines—self-published, non-commercial magazines—in our collections. For example, RBML already had a complete set of Search & Destroy, the iconic 1970s punk publication that writer and publisher V. Vale started while working at City Lights with donations from Allen Ginsberg and Lawrence Ferlinghetti. (Likely RBML has these because William S. Burroughs, whose papers we have, was interviewed in an issue.) Within RBML’s Avant Writing holdings I found zines that featured writers and artists active in the avant community, such as Johnny Brewton’s beautifully designed X-Ray which included work by the poet John M. Bennett. The Brett Shingledecker Papers, which documents Shingledecker’s activism and work as a cofounder of a gay and lesbian bookstore in Chicago during the late 1980s and early 1990s, contains queer zines from the era, many of which Shingledecker sold at his bookstore.The presence of these zines, however, was more serendipitous than intentional. Over the past few years, I have tried to take a more systematic approach and develop the zine holdings in ways that both build off these existing strengths and establish new ones. RBML now has nearly twenty unique zine collections including zines by Ohio zine makers, zines about gender and sexuality, zines by BIPOC (Black, Indigenous, and People of Color) zine makers, and Latin American zines (the latter of which was a collaborative acquisition with Latin American studies librarian Pamela Espinosa de los Monteros). One of the newest zine collections focuses on COVID-19. RBML does not typically collect contemporary material about current events, but after seeing the numerous zines that were being created about the pandemic during spring 2020, I knew I wanted to acquire some. The collection, which currently contains nearly 100 zines, will offer a window into ordinary people’s experiences of this historic event.

The RBML has a full run of the well-known Nancy’s Magazine, published from 1983 to 1996 by Ohio writer and artist Nancy Kangas.

RBML’s collecting is informed by the needs and interests of faculty and students, and we want to obtain materials that will be actively used. Zines, like first editions and archival documents, are an important resource for studying literary, cultural, and social history. Because zines are non-professional, small-circulation publications typically made by one individual or a small group, they often record perspectives and experiences outside of mainstream media. I see them as integral to building a vibrant and relevant special collections. We regularly teach with collection materials, and zines work well for a variety of instructional purposes, whether it’s a session on information literacy, art and design, history, copyright and fair use, or subcultures and social movements. One of my favorite ways to incorporate zines has been in sessions about the history of self-publishing with the English department’s literary publishing course. Seeing zines alongside a first edition of Walt Whitman’s Leaves of Grass encourages students to consider the tradition of publishing outside of established channels. It also underscores the vastness of and variety within RBML’s collections, challenging their assumptions about what is worthy of being collected and preserved. In this context, students recognize that a zine can have historical importance and research value, and that special collections can contain materials beyond famous works by canonical writers.

As we continue to publicize this collecting focus, RBML has been fortunate to receive some amazing donations. One example is a full run of the well-known Nancy’s Magazine given to us by its creator, writer and artist Nancy Kangas. Published from 1983 to 1996, Nancy’s Magazine comprised essays, comics, poetry, and recipes; typed and handwritten components; and hand-drawn and reappropriated images. Simultaneously idiosyncratic and relatable, the topics covered include reflections on the eggplant, a survey of what people want from public transit, an illustrated look at Kangas’ (less than perfect) wardrobe, and a history of street literature. Some issues contained additional items, such as a bookmark or seed packet. The publication is a perfect example of the elasticity and unruliness that makes zines compelling and shows how the medium has the potential to be both familiar and surprising (sharing some characteristics of magazines and newsletters while defying other conventions). Nancy’s Magazine is an exciting acquisition not only because of its importance in 1980s and 1990s zine culture and because Kangas is based in Columbus, but given its scarcity, RBML would have been unable to acquire every issue otherwise. 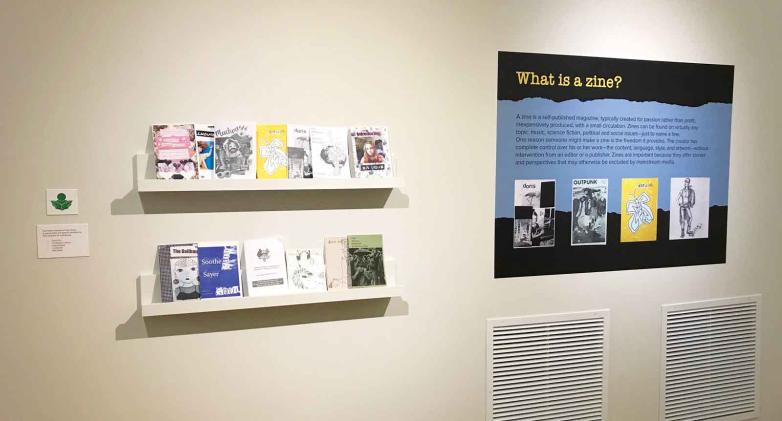 A “zine library” within the larger RBML allows readers to peruse student publications.

In addition to using zines in instruction, we have also incorporated them into events and programming. In 2018, to coincide with the library gallery exhibit I curated called Poets, Punks, and Pioneers: Self-Publishing in American Literature, our exhibition staff constructed a zine drop box that allowed anyone to leave their zine, which would then be placed in the exhibit and available for visitors to read (and later added to RBML’s zine collections). This past September, I collaborated with Books!, a student organization dedicated to book and zine-making, to host a zine open house. Attendees were able to see selections from the zine collections as well as chat with Books! members who brought their own zines for visitors to peruse and zine templates to take home. The event was a success—we had a great turnout, and Books! members had the opportunity to exhibit their work and talk to other students interested in learning about the group. Perhaps the best part was that several students shared how excited they were to learn that zines are part of special collections, telling me: “I had no idea the library would collect these!”