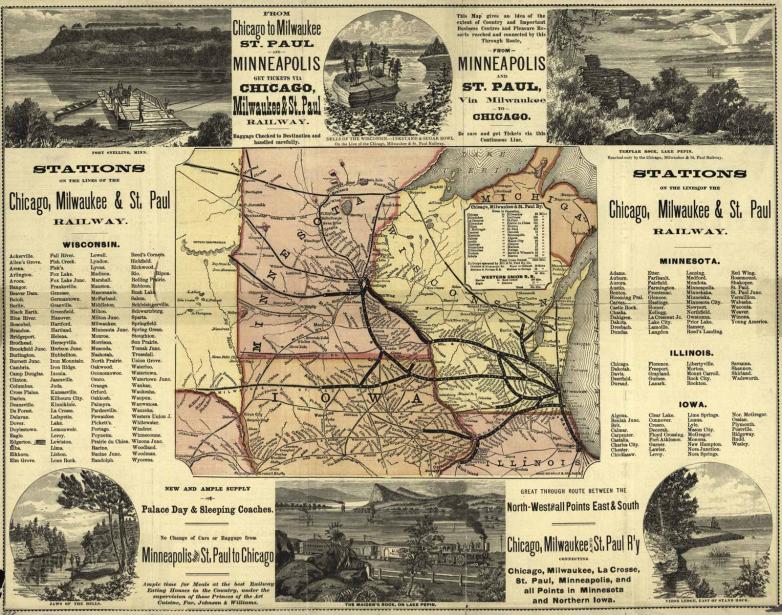 William H. Rand attributed the success of his map printing business to his early acceptance of cerographic printing. Developed in the 1830s, cerography (or wax engraving) allowed, for the first time, half-tone illustrations, colored maps, and text to be printed on the same page using the same printing press as shown in this 1874 map of rail lines in the Chicago area.

Maps set “the stage on which the drama [of politics and business] is played,” reads Rand McNally’s full-page advertisement from 1924, “[and] without this stage, the plot is meaningless.” The statement was part of a larger promise by the all-American map producer to continue making maps that are “reasonable in cost and invariably accurate.” And throughout much of its 150-year history, Rand McNally kept its promise. Generations of schoolchildren, businessmen, freight operators, and politicians relied on Rand McNally for much of their geographical information, making it the Google Earth of its day. By 1950, the company that most Americans held synonymous to maps could claim that it had produced a total of four billion maps and globes and was adding to that impressive figure at the rate of 150 million a year. 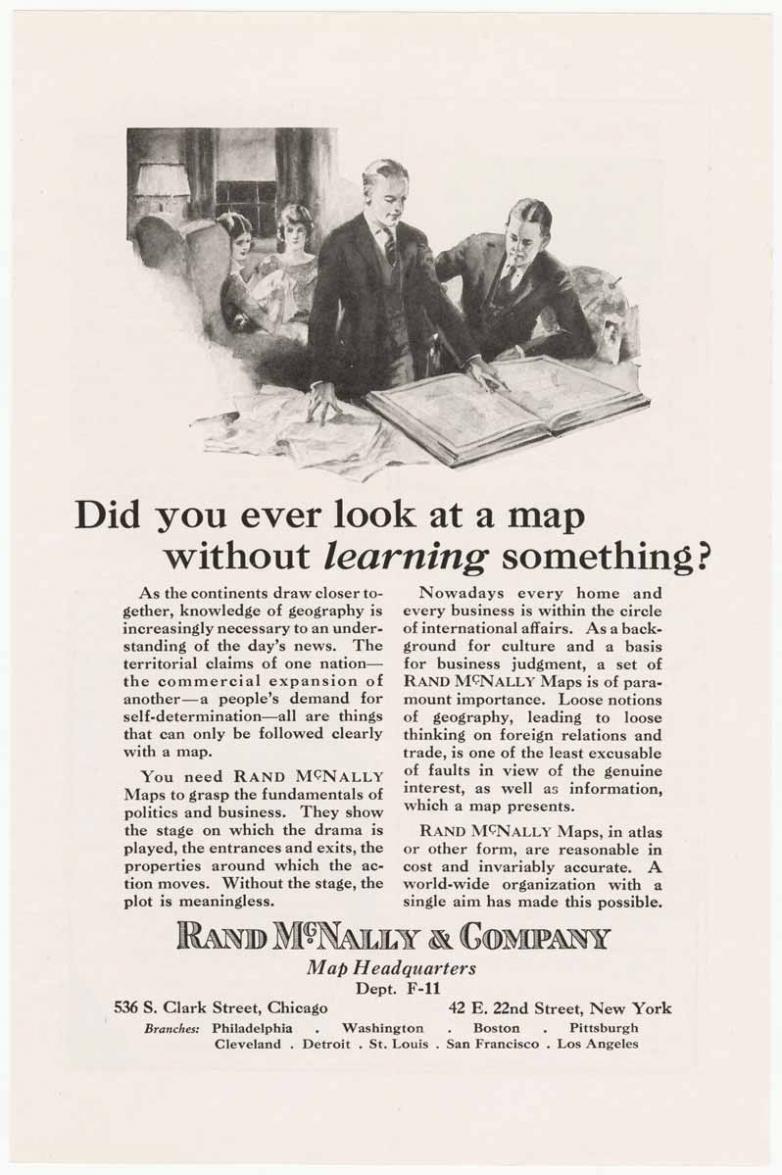 This full-page advertisement from National Geographic Magazine was part of an aggressive ad campaign that Rand McNally launched in the 1920s.

Rand McNally did not initially set out to become America’s top map producer. When the founder of the company, William H. Rand, arrived in Chicago from California just after the Civil War, he intended to cater to the needs of the booming railroad industry, printing their annual reports, timetables, stationery products, and tickets. The industry must have been pleased with Rand’s work, because in just three years his ticket printing business alone had grown to 100,000 units a day.

One of the associates that Rand hired to help him with his rapidly growing sales was Andrew McNally, a twenty-two-year-old printer who had recently immigrated to America from Ireland. McNally proved himself more than capable and was soon asked by Rand to become a partner in the firm, along with Rand’s nephew George Amos Poole. With Rand as president, McNally as vice president, and Poole as treasurer, they incorporated their new partnership in 1873 under the name Rand, McNally and Company. They celebrated the new business venture by announcing “to their railroad friends and patrons” that they were expanding their product line to include “Map Engraving in the very highest style of the art.” In less than a decade, the new map department would account for forty percent of the company’s revenue.

Rand McNally’s map engraving was unlike any other in North America. While most of its competitors were printing from lithographic stones, or incised copper plates, Rand McNally wisely decided to adopt the new wax engraving process (or cerography) developed by Sidney Edwards Morse in the 1830s and 1840s. Cerography used an inexpensive metal plate covered with a layer of hardened beeswax. Engravers removed slivers of wax that would make up a map’s lines and symbols. The waxed plate was then placed in an electrically charged bath of copper sulfate which caused a thin copper coating to adhere to the waxed surface. This coating conformed to all the engraved markings in the wax, and when peeled off, offered an exact replica of the waxed map, but in relief. The copper plate could be used in a letterpress and would be good for a million impressions, sixty times more than what a lithographic stone could produce and about a hundred times more than what could be printed from an incised copper plate. Cheaper production costs meant lower prices for their clients. 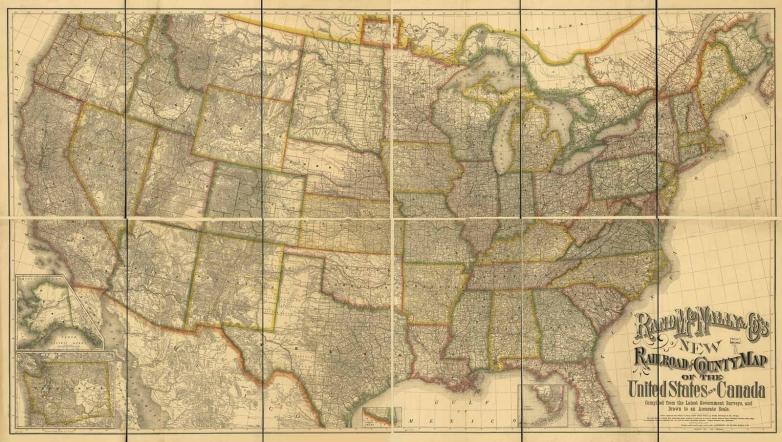 Rand McNally’s first colored wall map of the railways in the US and Canada was published in 1876. Measuring 58” by 100”, the map was, at the time, the largest work attempted by the company.

“It is generally admitted that our map engraving is not excelled in the world for clearness of outline and beauty of execution,” boasted a company pamphlet in 1879. While they may have outclassed their rivals in clean line work, rarely was this line work recognized for its artistry. Rand McNally’s maps were meant to be strictly utilitarian. Indeed, many were designed with the traveling businessman in mind. They provided information on the counties, towns, cities, rail systems, and road networks across the US, but not the natural features of the landscape, like the hydrography and topography. 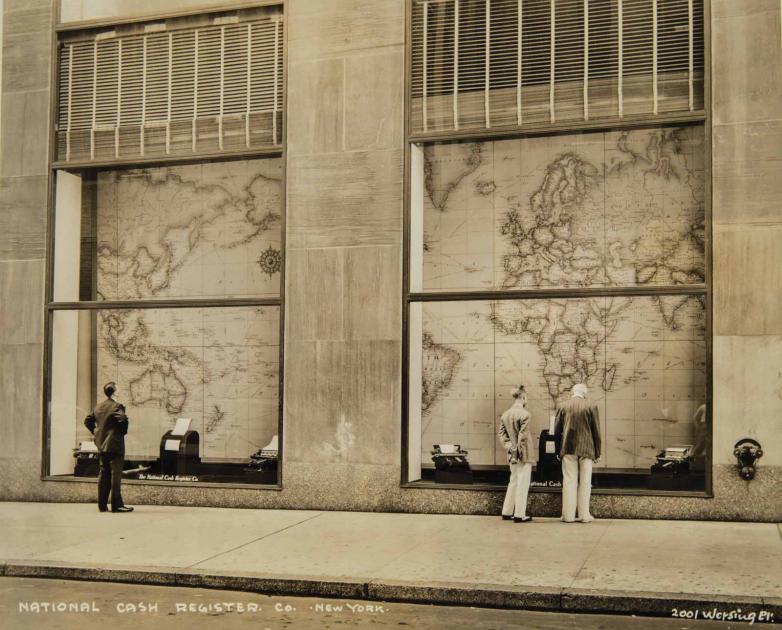 Courtesy of the Newberry Library

A significant part of Rand McNally’s revenue stream in the 1950s came from one-of-a-kind specialty maps the company made for corporate America, like the gigantic wall map National Cash Register featured at its New York headquarters. Dozens of other projects were displayed in corporate lobbies, including a thirty-foot glass globe made for the Christian Science Monitor building in Boston.

Despite the lack of ornamentation, the demand for Rand McNally’s maps and atlases remained high and the company became a prolific publisher. Between 1880 and 1917, for example, the company published some thirty different atlases, which it sold at prices ranging from $1 to $12. Single-sheet maps, like its vest pocket maps, sold for as little as fifteen cents. Rand McNally produced millions of these “in various sizes and formats of every conceivable locale in the country,” points out librarian Cynthia Peters.

Innovative marketing techniques helped the company to grow, and as a result, Rand McNally dominated domestic map production by the turn of the century. Complimentary copies of many of its atlases were sent to editors of larger newspapers along with a ‘notice of publication’ that praised the new product. The statement was carefully worded to make it appear as if the newspaper itself had compiled it rather than Rand McNally’s staff. Newspaper editors went along with the deception knowing full well if they ran it in their paper, Rand McNally would reward them with other free publications. “Advertising in this way … helped the company reach thousands of potential customers,” notes Peters.

The company also did not shy away from introducing new products to meet the requirements of exploding new technologies. Its first road map, a 200-page photo guide of the run from Chicago to New York, was published in 1909. Its first single-page state-wide road map followed in 1916. By 1921, its Auto Trail series would cover the Lower 48. Its first map catering to the needs of aviation enthusiasts was introduced in 1923, showing the locational information on more than 3,000 landing sites. And its first directory of landing fields, a 56-page booklet noting the size of each airport, the nature of the landing field, its prevailing winds, and facility for oil and gas sales, also appeared later the same year. Over the next half century, these products would evolve into what Andrew McNally III identified as some of the most complex and expensive forms of maps that a commercial mapmaker is likely to produce.

Rand McNally’s influence on American mapmaking was profound in other ways, too. Many of its senior managers used the company as a training ground before forming their own printing businesses. For example, the head of Rand McNally’s New York office, Caleb S. Hammond, founded his own map printing firm in 1900. C. S. Hammond was well-known for its thematic atlases and numerous works for the educational market. Louis Andrews, founder of the American Map Company, learned his trade with Rand McNally, as did Harry M. Gousha, founder of a printing firm that became Rand McNally’s chief rival in the production of road maps. The company treasurer, George Poole, also broke with the company after only a few years as a copartner. He joined his brother in putting together Poole Brothers, a firm that specialized in meeting the printing needs of the transportation industry. 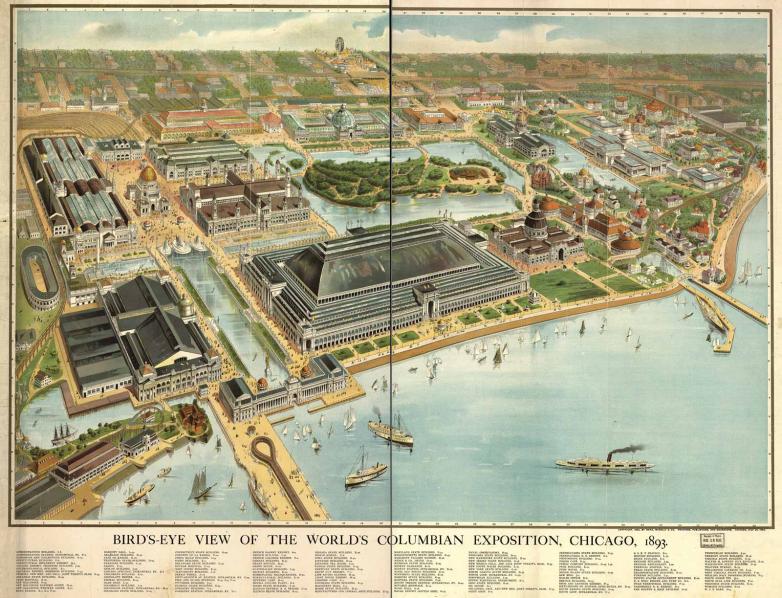 In the 1890s Andrew McNally was appointed to the Board of Directors of the World’s Columbian Exposition, a six-month-long celebration marking the 400th anniversary of Columbus’ arrival in the New World. Rand McNally was commissioned to print all the prestigious event’s guidebooks and maps, like this colorful bird’s-eye view.

In 1880 Rand McNally employed 250 people and had annual sales of $500,000. By 1913 sales had reached $2 million and passed $100 million in the early 1970s. In the 1990s the company added to its already healthy share of the market through its acquisition of Allmaps Canada, Thomas Brothers, Gousha, and Perley’s Maps. When the McNally family finally sold the firm to a New York investment group in 1998, it was valued at $500 million.

Having embraced cerography from the earliest days, Rand McNally’s huge production runs dispensed affordable geographical knowledge to the American public. The fact that they were able to do so for more than a century and a half is unique in the chronicles of American mapmaking. It speaks well of the company’s resilience and commitment to meet the challenges posed by rapid technological change.