A Quest for Illumination 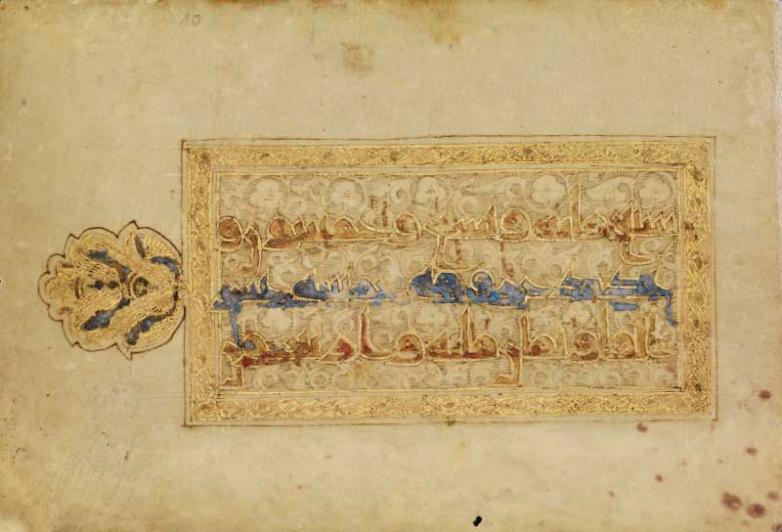 The Art of Three Faiths: A Torah, a Bible and a Qur’an is not merely an exhibition but represents the culmination of a thirty-five-year search for a Hebrew manuscript. As curators of manuscripts at the J. Paul Getty Museum, we work with a rich collection of books written and decorated by hand from the Middle Ages, Renaissance, and beyond. Like all collections, ours reflects the tastes and interests of those individuals who assembled it: the core was formed by about one hundred books and leaves assembled by Peter and Irene Ludwig of Aachen, Germany. They purchased heavily in the areas of German, Flemish, and French manuscripts, with important representative examples of Byzantine and Armenian illumination. With the exception of one stunning Qur’an, however, all of the so-called “Ludwig manuscripts” in the Getty’s collection were made for Christian use. Since 1983, when the Getty acquired the Ludwig collection, we have been actively searching for a Hebrew illuminated manuscript to expand our ability to represent the many religious traditions of the Middle Ages.

For a number of reasons, Hebrew illuminated books are exceptionally rare. While many people might assume that the cause for this lay in Jewish proscriptions against figural imagery, there is a small but substantial number of richly illuminated Hebrew manuscripts that counter this assumption. Their relative rarity is, in part, the result of the status of Jews in Western Europe during the Middle Ages. As “out-groups” living within the predominantly Christian society of Western Europe, Jews did not control the courts or monasteries that, for much of the Middle Ages, functioned as the major centers of manuscript patronage and production. Christian law also provided a stumbling block: Jewish craftspeople in Northern Europe were not allowed to join painting guilds. Thus many of the illuminated Hebrew books from the high Middle Ages are the product of cross-cultural exchange, in which Jewish scribes and Christian artists combined skills to manufacture exquisite books together. 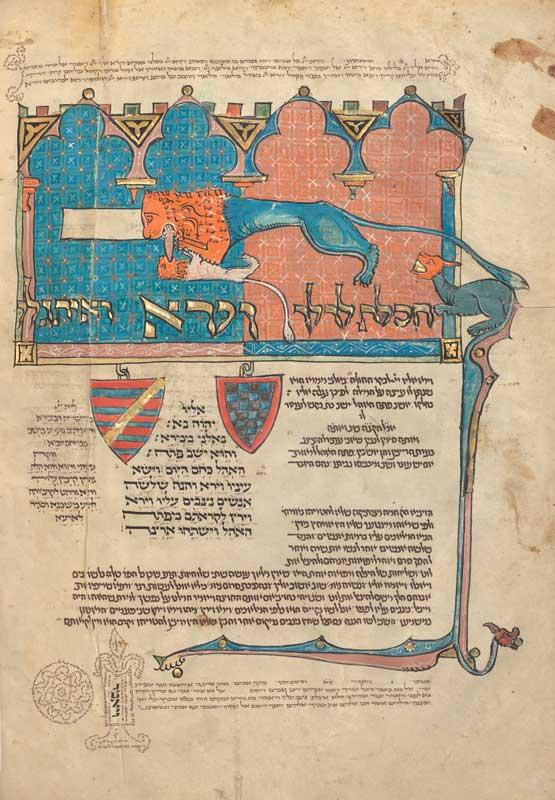 This year, thirty-five years after our founding curator drew up the ideal “wish list” of desired acquisitions for the collection (a list, incidentally, that included a number of Hebrew manuscripts), we were able to purchase one of the most elaborate such examples to survive from the Middle Ages. The Rothschild Pentateuch (now Ms. 116 in the collection) contains the first five books of the Hebrew Bible, otherwise known as the Torah: Genesis, Exodus, Leviticus, Numbers, and Deuteronomy. The manuscript is richly decorated—teeming with hybrid figures, animal and humanoid, as well as spectacular displays of a calligraphic virtuosity (known as micrography), the manuscript’s vibrant colors and gleaming gold distinguish it from the greater part of medieval Hebrew book production, which followed a largely textual tradition. 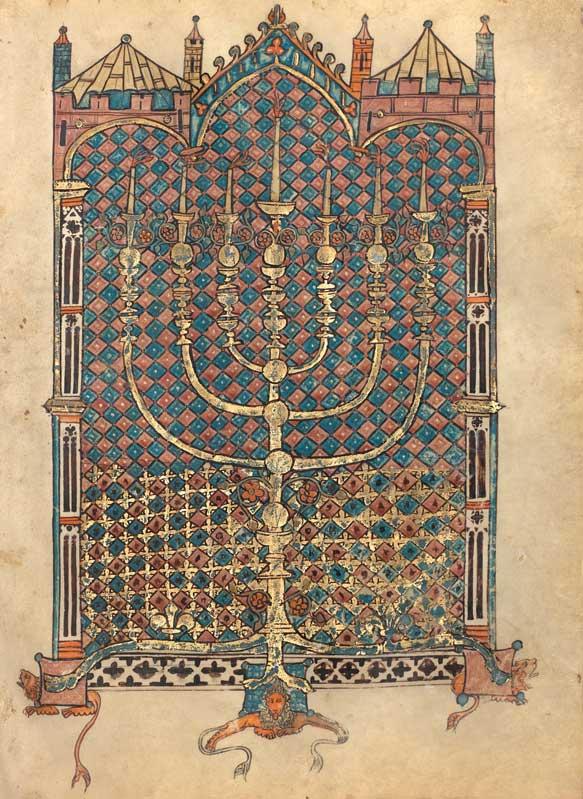 "Menorah of the Tabernacle" from the book of Leviticus from the Rothschild Pentateuch, made in France and/or Germany in 1296. "The Rothschild Pentateuch will be the greatest High Medieval Hebrew manuscript in the United States, and one of the most important illuminated Hebrew Bibles of any period," said Timothy Potts, director of the J. Paul Getty Museum, in announcing the recent acquisition. It is now the centerpiece of an exhibition titled Art of Three Faiths: A Torah, a Bible and a Qur'an. Leaf: 10-7/8 x 8-1/4 in. (27.5 x 21 cm).

The earliest known Hebrew Torahs in codex form date from the tenth century and were made in the Middle East and Northeast Africa. Only in the mid-thirteenth century do illuminated copies begin to appear in Northern Europe. By then, these manuscripts were serving the needs of wealthy members of the Ashkenazi Jewish community who had settled the areas along the Rhine around the end of the first millennium (now western Germany and northern France).

The Rothschild Pentateuch’s lavish illumination divides the text into sections to be read weekly so that the entire Torah would be read over the course of a year. The opening of each of the five books is celebrated with monumental Hebrew initials intertwined with lively marginal figures or a full-page illumination. Introducing the book of Leviticus is a commanding miniature of a shimmering menorah set against a geometric background of blue, rose, and gold. The towers that surmount the illumination evoke the setting of the tabernacle, the earthly dwelling place of God, where the menorah served as the only source of light. The miniature serves as an appropriate transition from Exodus to Leviticus, for Exodus details instructions for the building of the tabernacle while Leviticus documents the proper care of the tabernacle implements, including a pure gold menorah. 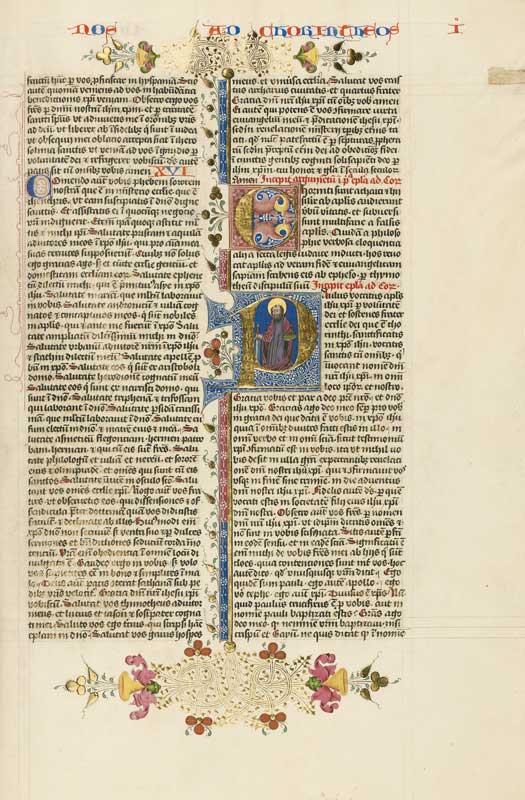 The acquisition of the Rothschild Pentateuch allows the Getty, for the first time, to represent the medieval art of illumination in the sacred texts of the three Abrahamic religions—Judaism, Christianity, and Islam, founded in that order. These religions trace their belief in the singular God to a common patriarch, the figure of Abraham (Ibrahim). Practitioners of all three religions have been called “people of the book” for their shared belief in the primacy of the divine word as conveyed through sacred scripture. Copies of the Torah, Christian Bible, and Qur’an are among the most beautifully illuminated manuscripts of the Middle Ages, represented by three objects from the Getty collection in Art of Three Faiths: a Torah, a Bible, and a Qur’an, on view until February 3, 2019. In addition to the Rothschild Pentateuch, visitors encounter a Christian Bible made in Cologne in about 1450, precisely during the years following Johannes Gutenberg’s introduction of the printing press in Central Europe. Throughout the book, we can observe centuries-old hallmarks of handmade books: carefully ruled lines (visible in the margins) arranged in two columns, embellished with decorated letters and pen flourishes. A ninth-century Qur’an from Tunisia complements the group. It was made within one hundred and fifty years of the prophet Muhammad’s death and is one of the earliest examples of chrysography (or writing in gold) of the period. Each of these manuscripts demonstrates that the word of God (Allah) provided luminous opportunities for artful decoration in book form.

The exhibition was organized by three of the curators in the manuscripts department, an unusually large team for an exhibition of just three objects. The plan to create a presentation that would allow us to represent the three major faiths of the western Middle Ages came about quite suddenly on the heels of the acquisition and required quick collaboration. Perhaps the biggest challenge was that the Pentateuch—and to some degree, the exhibition—had to remain a secret until the acquisition was officially announced. These circumstances meant that all of the usual exhibition design and communications meetings happened behind closed doors with a team that was sworn to secrecy. Now, we are delighted to be able to share this exhibition and our newest manuscript publically and enthusiastically.