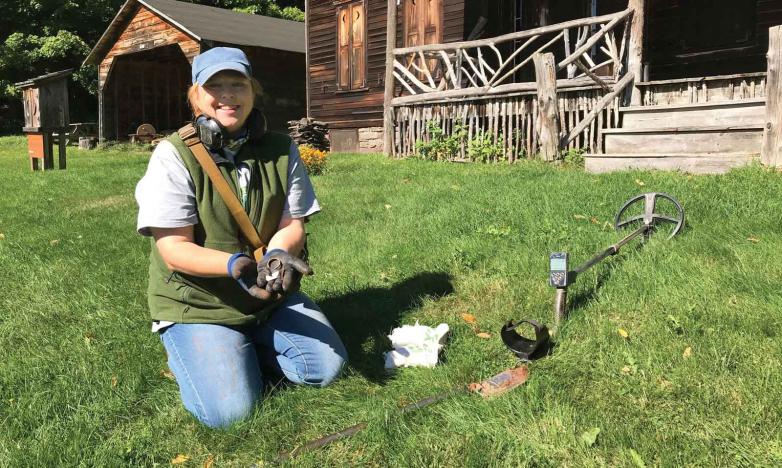 When famed naturalist John Burroughs died in 1921, he left behind hundreds of essays, comprising twenty-seven volumes. He also left behind several abodes, including Riverby and Slabsides in West Park, New York, and the Woodchuck Lodge in Roxbury, New York. He’d grown up on the farm where that lodge now stands and returned in his later years for summer retreats, sometimes with friends Henry Ford, Thomas Edison, and Harvey Firestone.

Inadvertently, Burroughs also left behind a small trove of everyday objects—utensils, coins, buckles, and other artifacts. A recent visit by the Delaware County Diggers, a trio of metal detectorists in New York’s Catskills region, turned up these and other fragments of the past on the property of Burroughs’ rustic lodge, a National Historic Landmark that’s changed remarkably little since he inhabited the place from 1910 to 1921.

At the invitation of the John Burroughs’ Woodchuck Lodge, the nonprofit organization that maintains the building and surrounding land, Delaware County Diggers’ Chris Altmann, Kim Altmann, and Jason Schwartz arrived armed with detectors, trowels, and a passion for this increasingly popular hobby. They fanned out on Burroughs’ lawn, scanning the soil, interpreting beeps and blips, and digging carefully to unearth long-forgotten artifacts. Admittedly, not all of their discoveries were dropped by the author. A gold hoop earring circa 1980 comes to mind. But the dirt delivered several Burroughs-era relics that lit up both the detectors and the detectorists.

A series of bleeps pointed to a buried spoon, which came as no surprise to the crew. “The most common utensils we find are spoons,” Chris Altmann said. Jason Schwartz located it just minutes into the search. “It’s definitely early-1900s,” Schwartz exclaimed. “It’s a teaspoon … that John Burroughs could have used; that is so cool!” Later that day, the detectorists cleaned some muck from the handle, revealing a monogrammed letter “B.” 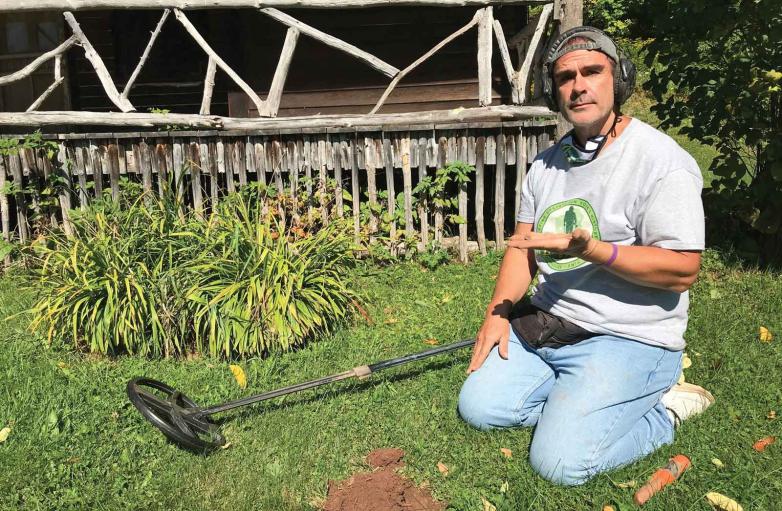 Chris Altmann of the Delaware County Diggers holds out one of his smaller finds: a button.

In addition to spoons (two were found, both monogrammed), the Diggers mined a crotal, or “jingle bell”; several Mercury dimes; buckles; latches; buttons; and a small brass finial. Then, in the apple orchard across the road, they found a tiny shard of silver, ornamented with a cherub and engraved with the words, “Dr. Barrus.”

Dr. Clara Barrus was Burroughs’ companion, secretary, nurse, and official biographer. She accompanied him on what would be his final journey on an eastbound train from California, when he uttered his final words into her ear: “How far are we from home?” Barrus continued living at the Woodchuck Lodge after his death, attending to her role as his literary executor. She also penned several books of her own, including Our Friend John Burroughs (1914), John Burroughs: Boy and Man (1920), and the two-volume Life and Letters of John Burroughs (1925).

The detectorists’ discoveries at Woodchuck Lodge are detailed in Chris Altmann’s new book, From the Ground Up 2: More Artifacts and Adventures, featuring lavishly illustrated stories of relics excavated in the US and England, a favorite vacation spot for hobbyists like the Altmanns. Curios plucked from English soil are subject to inspection before they can be exported, and museums get first dibs. If an object is considered culturally or historically significant, a fair market value is assigned and paid.

The Delaware County Diggers aren’t in it for the money, though, even when called upon for more mundane searches. “People call us to find rings, property stakes, septic tanks sometimes,” Altmann recounted with a laugh. “And if we happen to find a ring with an inscription in it, we’re always trying to track that down.” For historical organizations, everything the Diggers find is cleaned, described, and presented back to the organization, free of charge.

Watching the detectorists at work, it’s clear the joy is in the hunt—in discovering and researching the historical bits and pieces just under our feet.