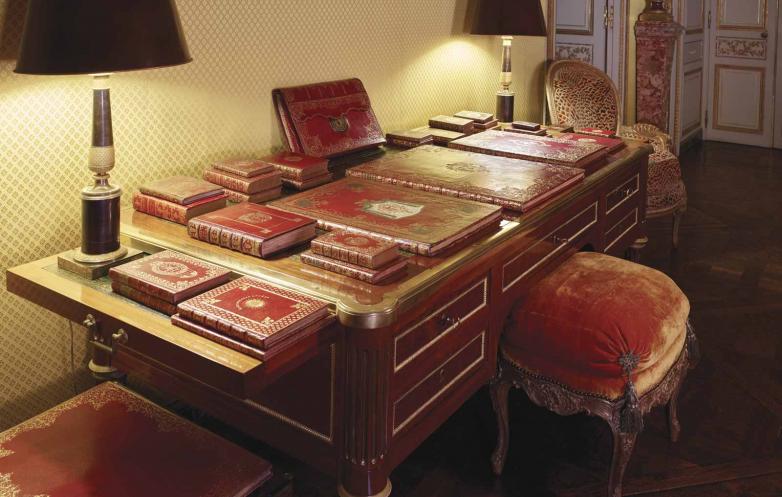 Jayne Wrightsman’s apartment was a veritable Versailles on Fifth Avenue. Her collection of decorative bindings was not relegated to shelves but instead displayed on tables, desks, and bureaus. “She lived with her collection in a way that most bibliophile collectors might not,” writes John T. McQuillen of the Morgan Library & Museum.

This summer, the Morgan Library & Museum opens the exhibition Bound for Versailles: The Jayne Wrightsman Bookbindings Collection. The collection of nearly 200 volumes, in decorative bindings dating between the seventeenth and early twentieth centuries from France, Italy, England, Germany, and Austria, came to the Morgan as the bequest of Jayne Wrightsman (1919–2019) in honor of Annette de la Renta. A society icon and cultural benefactor, Wrightsman supported the Morgan for nearly forty years. Her acumen in understanding the role of bookbinding in the world of decorative arts created an exceptional collection. It is perhaps second only to the James A. de Rothschild bequest at Waddesdon Manor, published in the 2013 catalogue, Printed Books and Bookbindings, which was also dedicated to Wrightsman.

Around 1950, Jayne and her husband, Charles Wrightsman (1895–1986), became interested in the art and interiors of eighteenth-century France, and she began, in her words, “Marie-Antoinette-ing it up.” The Wrightsmans collected extensively in this area, including paintings, sculptures, furniture, porcelain, books, and other examples of ancien régime decorative arts. Today, the Wrightsmans’ art collection is at the Metropolitan Museum of Art, while the greatest part of the book collection came to the Morgan.

In April 2019, I was part of a small group of Morgan staff tasked with inventorying and packing up Wrightsman’s books from her apartment. There she had created Versailles on Fifth Avenue, with the only exception being that it looked out to Central Park rather than André Le Nôtre’s formal gardens. The grandeur of the setting was heightened through the display of books on the desks, tables, and bureaus that furnished each room. She lived with her collection in a way that most bibliophile collectors might not. The books were not relegated to shelves, with only their spines peeking out, or sequestered in protective boxes. Rather, they were seamlessly displayed as part of a material environment of art and objet, complete aesthetic immersion. Placed atop furniture or standing vertically, with front covers proudly facing out, the books were thus allowed to be appreciated for the material qualities of their embellished bindings—glints of gold on fields of red. 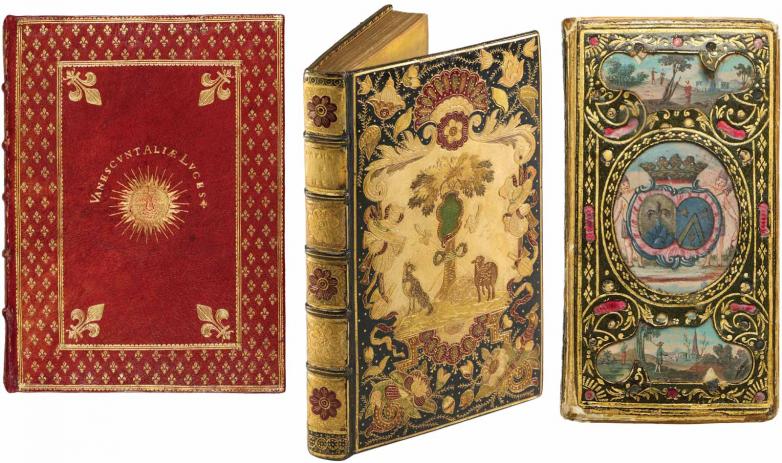 A sampling of the lavish bindings from the Wrightsman collection that will be on view at the Morgan Library from June 25 through September 26, 2021.

By March 2020, I had taken only the initial steps in building the exhibition when the Morgan closed due to the COVID-19 pandemic. With the exhibition slated for the following year, preparations needed to continue so that we would be ready when the museum could again open to the public. The difficulty to overcome was how to work on the Wrightsman bindings without being able to physically lay hands or eyes on them. Wrightsman’s own inventory, an unwieldy 700 pages in five large D-ring binders that included dealer descriptions, collection correspondence, and photographs, provided the foundation for sorting through the literary, historical, artistic, and individual (i.e., provenance) context of the volumes. It was clear that the heart of the collection was formed around the libraries and binders active during the reigns of Louis XIV, Louis XV, and Louis XVI.

The collection revealed several prevalent themes, including women book owners, French book illustration, and the significant role that books played in the preservation and display of court life. The exhibition recurrently showcases the gilt-tooling and mosaic decoration techniques employed by the bookbinding workshops of Augustin Du Seuil, Jean-Charles Lemonnier, Luc-Antoine Boyet, Nicolas-Denis Derome (le Jeune), Pierre-Paul Dubuisson, and many others. The celebration of material decoration is exemplified in the mosaic binding that Jacques-Antoine Derome, father of Nicolas-Denis, produced for Queen Marie Leszczynska. This extraordinary work is on a French psalter printed in 1725, the year Marie married Louis XV, and both the book and binding were fitting gifts for the new queen. 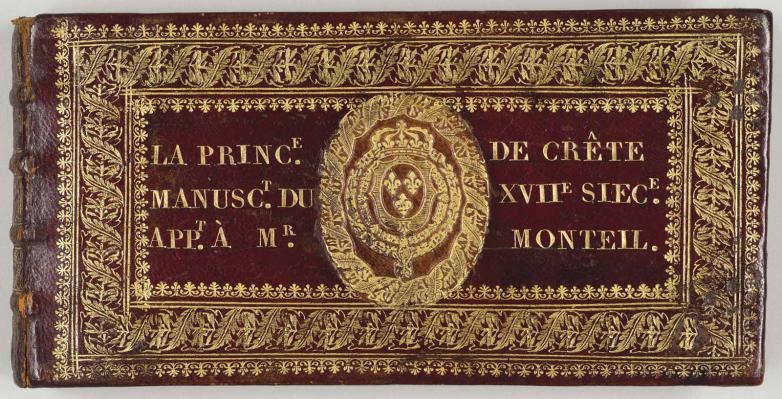 The autograph manuscript of André Philidor’s opera-ballet La princesse de Crète, likely produced for the premiere of the opera in 1688, and bound for Louis XIV.

In addition to exquisite bindings, the Wrightsman collection is rich in important illustrated works, including the monumental four-volume set of La Fontaine’s Fables choisies printed in 1755–1759 with illustrations by Charles-Nicolas Cochin II after Jean-Baptiste Oudry. The Wrightsman copy is bound by Lemonnier for Louis Phélypeaux, duc de la Vrillière. One of the best-known books from the period is the so-called Regent’s book, the edition of Daphnis et Chloé printed in 1718 with engravings by Benoît Audran after Philippe II, duc d’Orléans. Wrightsman also had a volume of just the engravings, bound for Philippe II, with each print inscribed “régi française” (regent of France). Among the manuscripts produced for or dedicated to members of the royal family, one of the most interesting is the autograph manuscript of André Philidor’s opera-ballet La princesse de Crète. The manuscript, likely produced for the premiere of the opera in 1688, was bound for Louis XIV. One of the missing manuscripts from the Philidor Collection at the Paris Conservatory, the volume was in the possession of Amans Alexis Monteil and Mortimer L. Schiff.

The Wrightsman collection is strong in books from the libraries of aristocratic women—about one-third of the entire collection—such as the renowned bibliophiles Madame de Pompadour and Madame Adélaïde de France, and the often maligned Marie Antoinette, as well as splendid bindings for the less well-known Christine, duchesse de Savoie, sister of Louis XIII, and Marie Adélaïde de Savoie, the ill-fated mother of Louis XV.

Bound for Versailles aspires to “Marie-Antoinette it up” and provide the public with context for Wrightsman’s books. The Morgan’s exhibition design, by Keith Johnson, reflects Wrightsman’s taste for the interior decoration of eighteenth-century France. The exhibition gallery is divided into rooms lined with faux-wood paneling and accented with decorative relief elements that reflect both the books’ original French and more recent New York environments. The volumes and bindings on display represent people: not only Wrightsman and the original owners, but also the artists, printers, scribes, binders, and finishers (gilders)—both male and female, many still anonymous—who produced these works of literary and artistic importance, capturing the regal tastes and trends of eighteenth-century France.