Maps in the Time of Cholera 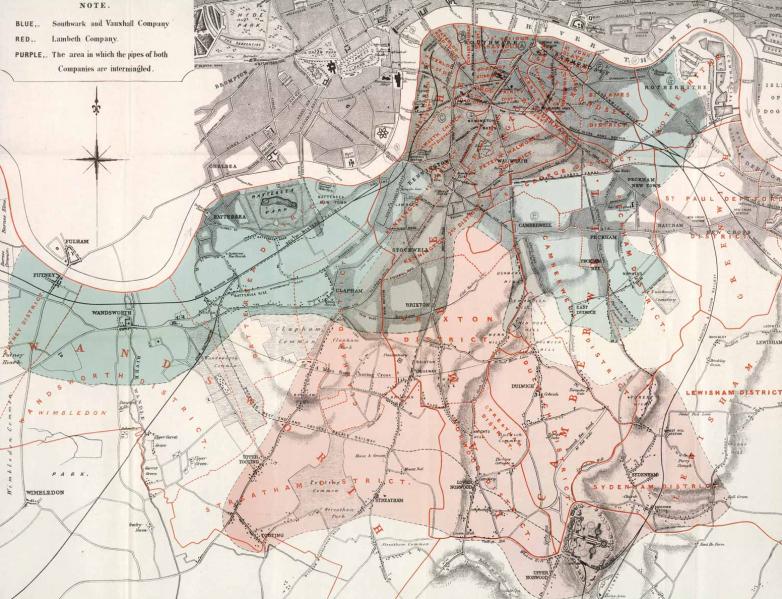 In the late summer of 1854, an eerie silence descended over Soho in London’s West End. The usual clatter of street vendors was gone and most of the residents had either packed their bags for the country or had taken refuge behind closed doors. The West Enders were desperate to escape yet another outbreak of cholera. It would be the third such outbreak in Britain since the peanut-shaped, microscopic Vibrio cholerae bacterium was first introduced from the Indian subcontinent twenty-three years earlier. Seventy residents of Soho’s five-block Golden Square had already fallen victim to this latest scourge and hundreds more, wasting away in their beds, would soon join them before the disease had run its course. An earlier cholera epidemic took the lives of 14,601 Londoners, and there was no reason to assume this latest outburst would be any different. 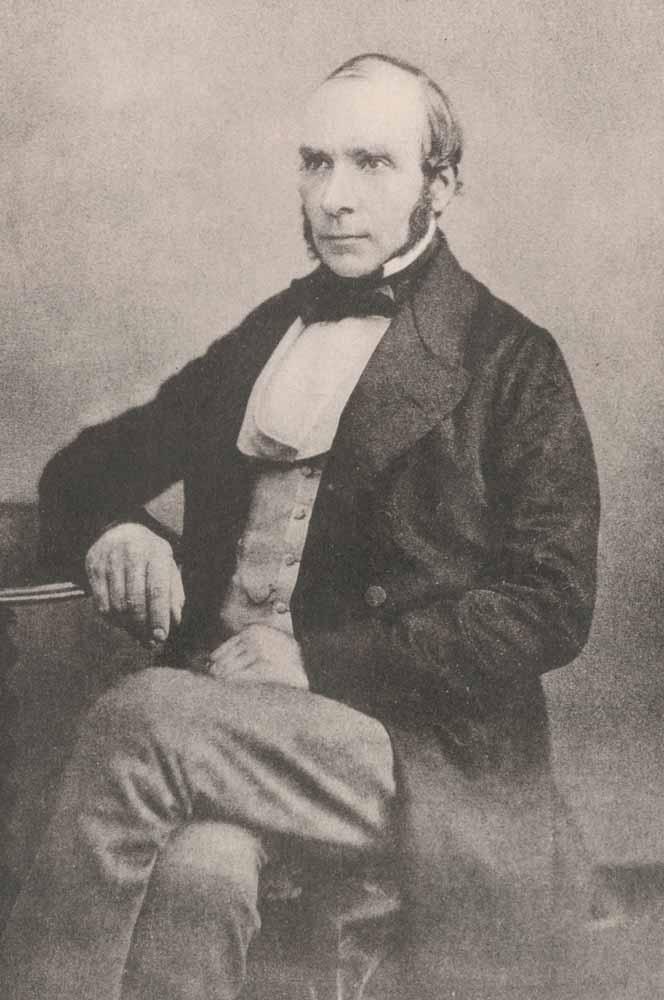 John Snow (1813–58) had already made a name for himself in medical research before he started investigations into the causes of cholera. Snow was one of the first surgeons to safely administer ether and chloroform as an anesthetic.

British physicians had become well acquainted with the contagion’s deadly symptoms: stomach cramps, a loose bowel, vomiting, sunken eyes, and a “look that is expressive of terror and wildness,” warned Henry Halford in The London Gazette. Death was inevitable for at least a quarter of its victims. They usually succumbed not to the bacterium itself, but to its effects on the body’s ability to hydrate itself. Severe dehydration inevitably led to kidney or heart failure and left behind a tired, broken body that had turned gaunt and bluish. Death followed in as little as twelve hours or could drag on for as much as a week.

A visitor to Soho in the mid-nineteenth century probably would have found it hard to believe that it was once a highly fashionable part of London. Historian Steven Johnson estimates “almost a hundred titled families lived there in the 1690s,” among them the Prince and Princess of Wales and several of England’s greatest artists and poets. But as the city expanded over the next century, families of means moved further west, leaving behind an infrastructure that new landlords repurposed into multiple residences and small industries, like the Eley Brothers’ percussion cap factory, and various slaughterhouses and livestock markets.

The net effect of crowding so many people and animals together left Soho rundown and with its fair share of nauseating odors, many of which emanated from overflowing privies, basement cesspools, and “dung heaps the size of houses,” which, in defiance of local ordinances, were never properly cleared away. It is no wonder the brightest minds of the period thought cholera and other contagious diseases were miasmic in origin. That is, the diseases were believed to be transmitted through the air by poisonous gases. Proponents of the theory only had to point to the prevalence of sickness in London’s overcrowded and smelly slums like that of Soho. 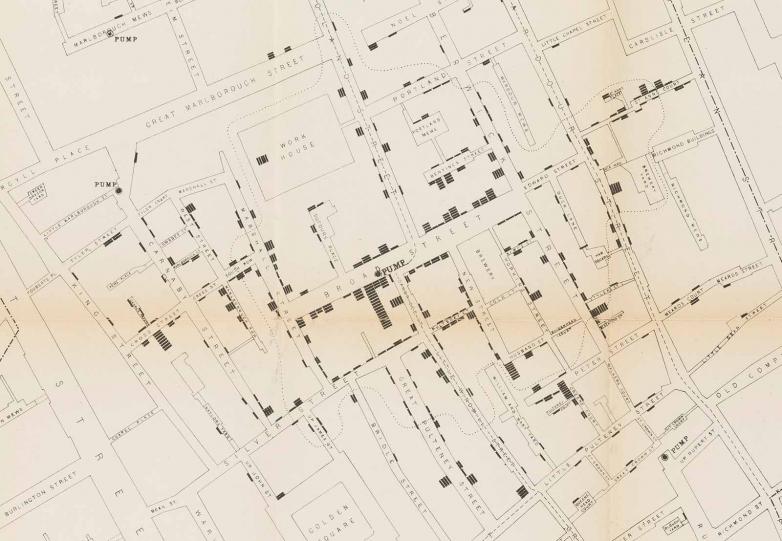 Courtesy of the Wellcome Collection

John Snow’s famous dot map showing the distribution of deaths from the 1854 cholera outbreak in the Soho district of West London. Snow was able to show a cluster of victims around the well at the corner of Broad and Cambridge Streets (today’s Broadwick and Lexington).

If anyone had paid attention, they would have noticed Soho’s smelly streets were regularly patrolled by at least one visitor, the forty-one-year-old general practitioner and anesthetist John Snow. He was one of the few medical specialists brave enough to tend to the dying in their last hours. He was also curious as to the origins of the affliction that was making an appearance all too regularly. If diseases were spread by offensive stenches, Snow reasoned, one would expect the laborers who worked in the city’s sewers would be overly represented among the sick. Yet they had no higher death rate than any other class of worker. “Sewer hunters are strong, robust and healthy men,” commented one observer. “Some of the elder men are between sixty-eighty years of age and have followed the employment during their whole lives.”

Snow himself remained free of the disease even though he breathed the same air as the sick and dying. Eventually Snow came to the realization that some unidentified agent was being passed from victim to victim through human waste, or more likely through drinking water that had been contaminated by human waste. “Cholera wasn’t something you inhaled. It was something you swallowed,” points out Steven Johnson.

Interviewing the families of victims, Snow soon discovered that the one thing they had in common was their access to a well on Broad Street. Its mild carbonation gave it a pleasant taste and even on the hottest days, the water was refreshingly cool. Unlike the murky water provided by other Soho wells, its odorless, colorless appearance made it look clean and safe for drinking. Many residents went out of their way to bypass their local well and refresh themselves on Broad Street’s champagne-like waters. 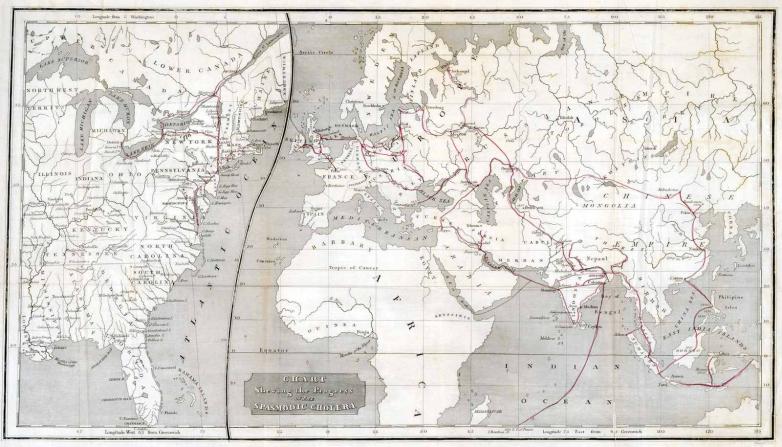 Amariah Brigham’s (1798–1849) map shows the spread of cholera via the trade routes from India (1817) and China (1820) through the Middle East to Europe, Scandinavia, and Britain where it arrived in 1831. The American physician collected his data from other publications and presented his findings in A Treatise on Epidemic Cholera (1832).

Snow was able to convince the board of guardians of St. James’s Parish to disconnect the Broad Street pump. The Soho cholera outbreak, which was already in decline, ceased almost immediately but not before 616 Soho residents had lost their lives, leading Snow to label the contagion “the most terrible outbreak of cholera which ever occurred in this kingdom.” Later, a closer inspection revealed the well had been dug just three feet from an old cesspit drain. The cesspit contained wastewater from dirty diapers, including the diaper of a baby who was known to have contracted cholera. The evidence was overwhelming and led Snow to conclude “that there has been no particular outbreak or increase of cholera, in this part of London, except among the persons who were in the habit of drinking the water of the [Broad Street] pump-well.”

Snow turned to cartography as a way of communicating the results of his research to other professionals. He composed a simple dot map which showed little more than a layout of Soho’s streets, the wells that supplied the neighborhood with drinking water, and each known death from cholera. The latter was identified by a single black bar resembling a miniature coffin. “I found that nearly all the deaths had taken place within a short distance of the [Broad Street] pump. There were only ten deaths in houses situated decidedly nearer to another street-pump,” wrote Snow in the Medical Times and Gazette. “In five of these cases,” continued Snow, “the families of the deceased persons … always sent to the pump in Broad Street, as they preferred the water … In three other cases, the deceased were children who went to school near the pump in Broad Street.”

Civil engineer Egbert Viele was among those who continued to believe in the miasmatic causes of disease, even decades after John Snow had proved otherwise. In this 1865 plan (and in its 1874 reissued version), the street grid and sewer system were superimposed over Manhattan’s original topography, waterways, and coastline. Viele used the map to argue for an improvement to the island’s sanitation.

A second map further highlighted the correlation with contaminated water. It concentrated on the water supply of a region of London south of the Thames. Two companies ran pipes through the neighborhood: the Southwark and Vauxhall Waterworks Company and the Lambeth Waterworks Company. The area serviced by the two companies were identical in terms of the socioeconomic status of their residents, and yet the residents supplied by Southwark and Vauxhall had a cholera rate fourteen times that of homes supplied by Lambeth. Both companies got their water from the Thames River; however, Lambeth sourced its water above the tidal reach and the parts of the Thames known to be contaminated by human waste from the city’s sewers.

The two maps were published in a revised and expanded second edition of Snow’s On the Mode of Communication of Cholera (1855) and have firmly entrenched his name in the history of medical cartography. Although it would take another thirty years for researchers to identify the specific waterborne parasitic organism that causes the dreadful disease, Snow did suggest that the organism was probably capable of multiplying itself like “veritable animals.” Unlike miasmatists who believed bad vapors accounted for any number of ailments, Snow further speculated that one rapidly reproducing organism was probably specific to one disease. Snow’s research into cholera drove a large spike into the miasmic coffin and offered a great leap forward in germ theory.