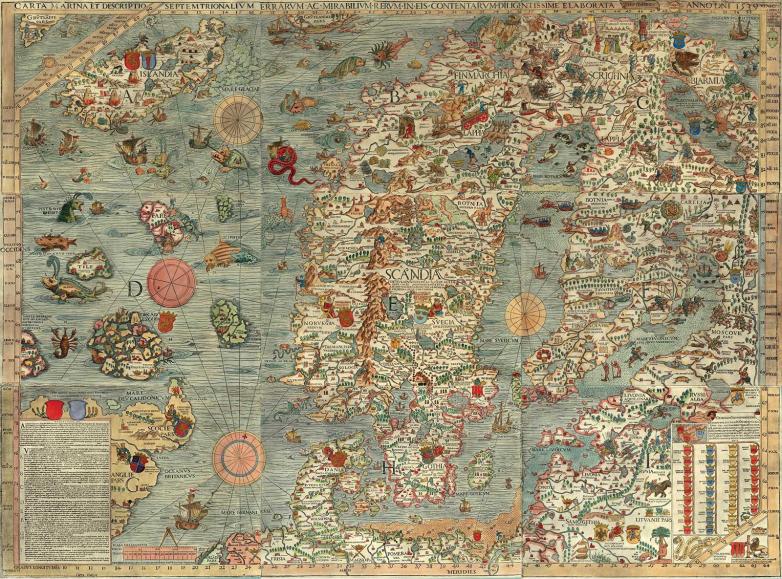 When it was published in 1539, Olaus Magnus’ Carta marina was the most detailed and most accurate map of any part of Europe. Twelve years in the making, the map was a curious blend of personal observations, Scandinavian lore, and the teachings of ancient scholars. Today, only two original versions of the masterpiece are known, both in institutional collections. The copy shown here is a hand-colored facsimile from 1949.

Disappointed with the maps of Scandinavia that were circulating throughout Europe in the early sixteenth century, Olaus Magnus (1490–1557) set out on a twelve-year quest to map the region to a level of detail that was exceptional. Published in 1539, his beautifully colored and richly decorated Carta Marina was the first large-scale map of any part of the European continent. In its day, Magnus’ map became a major source of iconography on sea monsters and a source of inspiration for other cartography on Northern lands, like that created by Abraham Ortelius (1527–1598) and Sebastian Münster (1488–1552).

Born in Linköping, Sweden, Olaus Magnus (a Latin translation of his Swedish birth name Olof Mänsson) had traveled extensively throughout Scandinavia by the time he completed his theological training in 1517. In an era when most mapmakers seldom left their drafting tables, Magnus personally sailed much of the coastline himself, collecting not only Northern folklore “but also classical texts, eyewitness accounts, and Christian mythology,” notes Emma Thompson in The Portolan. His travels took him as far north as Pello, where permanent settlement ended, and as far west as Nidaros, Norway. 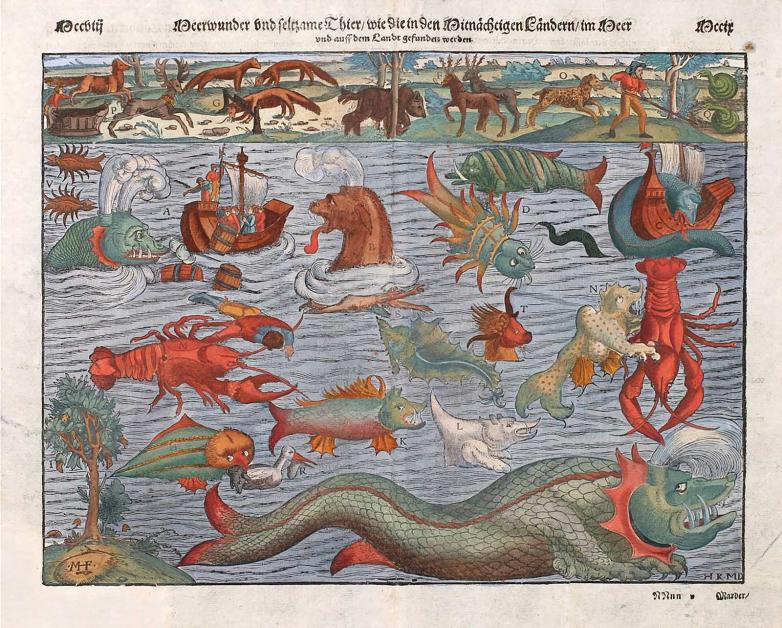 Sebastian Munster’s Monstra Marina & Terrestria [Marine and Terrestrial Monsters] was included in multiple editions of his Cosmographia Universalis beginning in 1544. The plate includes sea beasts from the western half of Magnus’ map and land-based mammals (in the panel across the top) from the eastern half.

When Sweden’s King Gustav I announced his conversion to Lutheranism in 1527, Magnus went into self-imposed exile. The decision to remain loyal to the Catholic church cost him dearly. His family’s assets were seized, forcing him to accept the charity of the Polish archbishop and Danzig’s city council. The move to Danzig (now Gdansk), however, proved fortuitous for Magnus. It allowed him to meet with seafarers and scholars familiar with the Baltic region. Among them was the cartographer Bernard Wapowski, who had prepared maps of the region’s coastlines and its trade routes. He was more than willing to share these with Magnus, allowing him to incorporate the data into his own map that was slowly beginning to take shape. 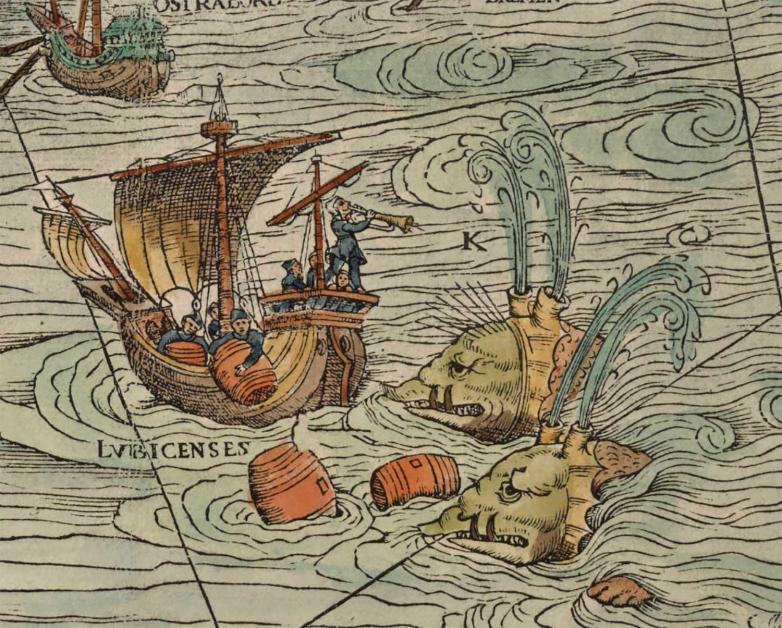 According to Magnus, some of the largest whales could raise their awkward bodies beyond the height of a ship’s mast and spew forth a cloud of water that sunk even the strongest ships.

In 1537, Magnus left Poland for Venice, the mapmaking hub of Europe. Having secured a right of publication from the Venetian Doge Pietro Lando and a ten-year imprimatur from Pope Paul III, Magnus was finally ready to print his map, to which he had given the rather lengthy title Carta marina et descriptio septemtrionalium terrarum ac mirabilium rerum in eis contentarum…[A Marine Map and description of the Northern Lands and of Their Marvels…]. Printed from nine, folio-sized woodblocks, the map was unusually large and costly to produce. Magnus borrowed 440 ducats to cover printing costs; however, the amount is thought to have been only enough to make a few copies. “The title makes it clear that Olaus intended his map to be used by navigators,” argues map curator Carol Urness. But it is difficult to imagine an expensive watercolored map being used in a dank captain’s cabin on the high seas. Perhaps he was hoping the mercantile class would help him recoup some production costs.

In the tradition of the great mappae mundi of the medieval period, Carta marina probably functioned more as an illustrated encyclopedia than as a navigational aid. It provided information on a broad range of historical matters, as well as the physical geography of the region. For example, it locates 900 place names and an entire roster of geographical facts, many of which were described in a sixteen-page pamphlet that was published simultaneously with Magnus’ map. The pamphlet was published in Italian under the title Opera breve [Brief Work] and in German as Ain kurze Auslegung und Verklerung der neuuen Mappen [A Brief Interpretation and Explanation of the New Map].

Sixteen years later, in 1555, Magnus supplemented his encyclopedic map even further with a reference book, which described almost everything man and nature. At 850 pages, Historia de gentibus septentrionalibus [A History of Northern Peoples] was a monumental piece of writing. The work was divided into twenty-two books (or sections) with a total of 476 chapters, not including the preface, appendices, and 481 woodcut illustrations. The folio-size book must have been popular because the original Latin text was later translated into Italian (1565), German (1567), English (1658), and Dutch (1665). In a period when academic sources on Northern lands were limited, the Carta marina and the Historia were welcome scholarship on a little-known region of Europe. 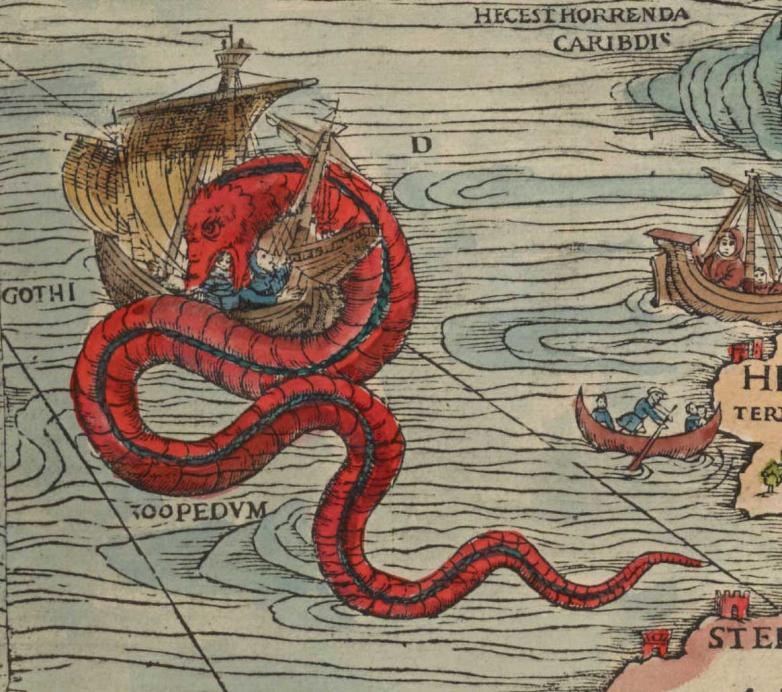 For mariners, the Great Norway Serpent or Sea Orm was one of the most terrifying creatures they would encounter.

Local folklore predominates in much of the iconography created by Magnus for Carta marina. In one small vignette, a woman with long red hair aims her bow at some foxes: “Here you may see a woman, her hair loose, aiming arrows,” wrote Magnus to explain the Finmarchia hunting scene. “Those who live under the celestial pole find in … their forests such rich abundance of game that the men alone would not suffice to hunt them down if their womenfolk did not race to their sides.” In another vignette two armies face off across an ice-covered Gulf of Finland. “This is a reference to a battle that occurred in 1495, when the Muscovites attempted to conquer Viborg by riding over the ice,” explains historian Thomas Berg.

The kingdoms that dotted the landscape were also given some attention. Each was shown with its coat of arms and a biblical quote. Catholic kingdoms were associated with quotes of praise; Protestant kingdoms were allocated quotes filled with condemnation. Magnus just could not resist other jabs against the Protestants. One creature, a ‘sea swine’ located northwest of Tile Island, was the stuff of nightmares. It was believed to have a boar’s head, sharp tusks, dragon feet, a scaly body, and three eyes along its flank. Legends claim the creature was observed in 1537, the year in which the Reformation was completed in Denmark and Norway. According to Magnus, the creature was first spotted in the waters off Germany where “there also roam very many monsters which have devised for themselves new laws of the Christian faith and religion.”

Other deadly sea serpents abound, like the 200-foot-long sea snake that is “wont to live in Rocks and Caves toward the Sea-Coast … [which] devour Calves, Lambs, and Hogs … He hath hair hanging from his neck a Cubit long, and sharp Scales … He puts up his head on high like a pillar, and catcheth away men, and he devours them.” 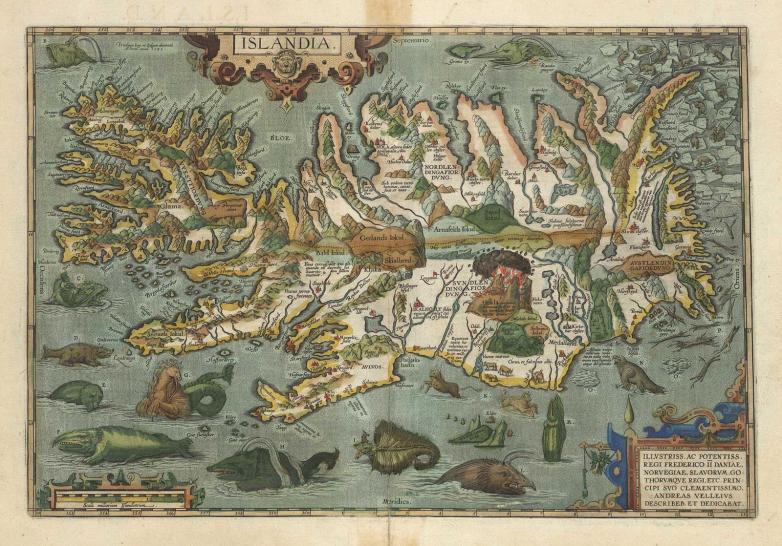 Courtesy of the National and University Library of Iceland

Abraham Ortellius’ map of Iceland was first published in the 1590 expanded edition of his magnificent atlas, Theatrum Orbis Terrarum [Theatre of the World]. Ortellius encircled the island with twelve “denizens of the deep,” many of which were borrowed directly from Magnus.

Like a modern-day horror movie, it was the monsters that drew most of the attention. Although it was not unusual for maps of the period to feature monsters lurking in dangerous waters, Carta marina was noted for its vivid portrayal of these deadly creatures and their prevalence—more than twenty were featured on the map. Unlike the map’s land mammals, which were drawn from life, the sea creatures were subject to the artist’s imagination and could be made to appear as mean or as gentle as the circumstances required. In either case, they were drawn from the stories that sailors had heard and were as real to them as unicorns and dragons were to landlubbers.

Despite its revolutionary presentation and accuracy, Carta marina never achieved significant sales. It may have been priced too high, or its size may have caused would-be buyers to have second thoughts about purchasing it. At 5' x 4', it was the largest paper map to be produced in the sixteenth century. Consequently, it was difficult for map aficionados to handle and store. Or possibly Italian collectors were simply not interested in a detailed map of a faraway, snow-bound corner of the continent. A smaller facsimile of the map, published in 1570 by the French-born Italian engraver and publisher Antonio Lafreri, proved more popular: Printed from four folio-sized copper plates, it took up less than half the space of Magnus’ original work and was considerably less expensive to print. It was a runaway success.