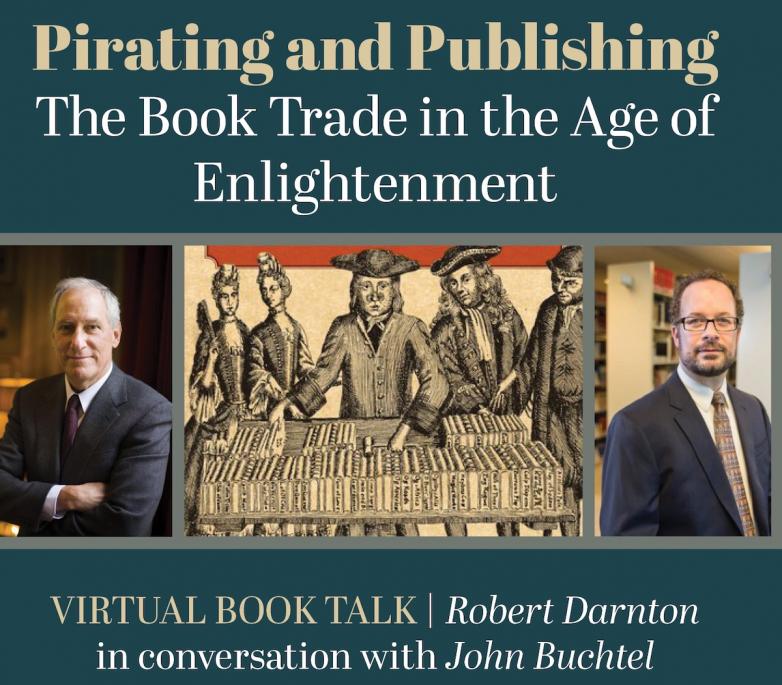 Courtesy of the Boston Athenæum

Boston — Reserve a space now for a virtual Book Talk: Pirating and Publishing: The Book Trade in the Age of Enlightenment: Robert Darnton in conversation with John Buchtel. Wednesday, February 3, 2021 - 6:00pm to 7:00pm. Registration is requested. Members and VESP holders: Free | Visitors: $5

In the late-18th century, a group of publishers in what historian Robert Darnton calls the "Fertile Crescent" countries located along the French border, stretching from Holland to Switzerland pirated the works of prominent (and often banned) French writers and distributed them in France, where laws governing piracy were in flux and any notion of "copyright" very much in its infancy. Piracy was entirely legal and everyone acknowledged tacitly or openly that these pirated editions of works by Rousseau, Voltaire, and Diderot, among other luminaries, supplied a growing readership within France, one whose needs could not be met by the monopolistic and tightly controlled Paris Guild.

Darnton's book focuses principally on a publisher in Switzerland, one of the largest and whose archives are the most complete. Through the lens of this concern, he offers a sweeping view of the world of writing, publishing, and especially bookselling in pre-Revolutionary France--a vibrantly detailed inside look at a cut-throat industry that was struggling to keep up with the times and, if possible, make a profit off them. Featuring a fascinating cast of characters lofty idealists and down-and-dirty opportunists this new book expands upon on Darnton's celebrated work on book-publishing in France, most recently found in Literary Tour de France. Pirating and Publishing reveals how and why piracy brought the Enlightenment to every corner of France, feeding the ideas that would explode into revolution.

Robert Darnton is Carl H. Pforzheimer University Professor and University Librarian, Emeritus of Harvard University, and the author of The Great Cat Massacre (1984) and A Literary Tour de France (2018), among others.

John Buchtel is Curator of Rare Books and Head of Special Collections at the Boston Athenæum. He previously served as director of the Booth Family Center for Special Collections at Georgetown University and as curator of rare books in the Sheridan Libraries at The Johns Hopkins University. He earned his Ph.D. in English, with a focus on early modern British literature, at the University of Virginia, while also acting as curator of the teaching collections at Rare Book School. He teaches, lectures, and publishes on the history of books and printing, the history of libraries, book collecting, and literary patronage.