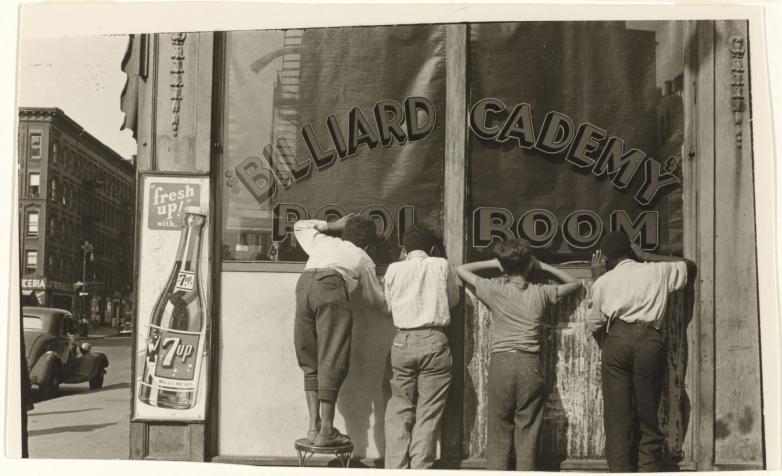 Los Angeles — The U.S. experienced a number of major changes during the first half of the 20th century: new infrastructure, progressive social reforms, increased immigration, economic booms, and the Great Depression. Seeking to capture the shifting world around them, printmakers and photographers of the time employed innovative techniques to disseminate the vitality of the urban American experience.

Gathering depictions of street life and urban leisure as well as skyscrapers, subways, and tenement apartments, True Grit: American Prints and Photographs from 1900 to 1950, on view from October 15, 2019, through January 19, 2020, at the J. Paul Getty Museum at the Getty Center, offers diverse perspectives on the early twentieth-century American urban experience.

With works drawn from local museums, a private collection, and the Getty’s own collection, the exhibition provides two vibrant surveys of city life: one featuring early 20th-century American prints and a second showing contemporaneous photographs.

“The artists featured in True Grit were acute and tireless observers of daily life,” says Timothy Potts, director of the J. Paul Getty Museum. “In their work, they sought to convey not only the beauty of the modern metropolis, but also the everyday triumphs and challenges, the sardonic asides, and the small epiphanies of modern urban life. With few exceptions, the individuals represented in these scenes are members of the working class and recent immigrants whose lives tumble together in congested city spaces. Focusing on recent technological wonders such as the skyscraper, the suspension bridge, and the subway, the artists in this exhibition managed to inject the grit and bustle of early twentieth-century life into images of timeless power and social relevance.”

Looking for effective ways to express the vitality of the urban American experience, artists gravitated to printmaking as a relatively inexpensive medium with great potential for wide circulation. Artists such as Ida Abelman, George Bellows, Mabel Dwight, and Louis Lozowick employed lithographic crayon on limestone to evoke the rugged tenor of the American spirit; Martin Lewis and Edward Hopper experimented with sand-ground etching to suggest the nebulous light of the American city; and Peggy Bacon and Armin Landeck used drypoint needle to produce sharp-edged social satires.

True Grit: American Prints from 1900-1950 also celebrates the rich holdings of prints throughout the L.A. region, with loans of American works on paper from The Huntington Library, Art Museum, and Botanical Gardens; the Los Angeles County Museum of Art (LACMA); the UCLA Grunwald Center for the Graphic Arts at the Hammer Museum; and the private collection of Hannah S. Kully.

“True Grit: American Prints from 1900 to 1950 provides a broader geographic, political, historical, and cultural context for the European art on view in the Museum’s galleries,” says Stephanie Schrader, drawings curator at the Getty Museum and co-curator of the exhibition. “This exhibition complements the Getty’s holdings of early 20th-century American photographs, so it seemed natural to present a companion exhibition in an adjacent gallery to allow for a comparative study of related subject matter in a different media.”

True Grit: American Photographs from 1900 to 1950 traces developments in the history of photography as it simultaneously reveals the character and the evolution of New York City. As a center of commerce and culture, the metropolis inspired many photographers to document its growing infrastructure, towering architecture, and increasingly complex social fabric. Artists featured in the exhibition include Paul Strand, Walker Evans, Berenice Abbott, Lisette Model, Alfred Stieglitz and Helen Levitt.

“The photographs chosen for this exhibition dramatically document the transformation of New York City, while also reinforcing how technical and stylistic aspects of photography evolved as rapidly as the urban environment,” said Jim Ganz, senior curator of photographs at the Getty. “Moving from the Pictorialist tradition at the turn of the century and its emphasis on moody, soft-focused cityscapes to modernist visions that accentuate sleek architectural forms and dynamic perspectives, the history of photography in the early 20th century changed dramatically in a relatively short period of time.”

The combined exhibition, True Grit: American Prints and Photographs from 1900 to 1950, shown in adjacent galleries, is on view October 15, 2019—January 19, 2020. It is curated by Stephanie Schrader, curator of drawings at the J. Paul Getty Museum, James Glisson, Bradford and Christine Mishler Associate Curator of American Art at The Huntington Library, Art Museum, and Botanical Gardens, and Jim Ganz, senior curator of photographs at the Getty Museum.

In conjunction with the exhibition, Getty publications will release a catalog, True Grit: American Prints from 1900 to 1950. Written by Stephanie Schrader, James Glisson, and Alexander Nemerov, this catalog examines a rich selection of prints by well-known figures like George Bellows and Edward Hopper as well as lesser-known artists such as Ida Abelman, Peggy Bacon, and Mabel Dwight. Written by three scholars of printmaking and American art, the essays present nuanced discussions of gender, class, literature, and politics, contextualizing the prints in the rapidly changing milieu of the first decades of twentieth-century America.