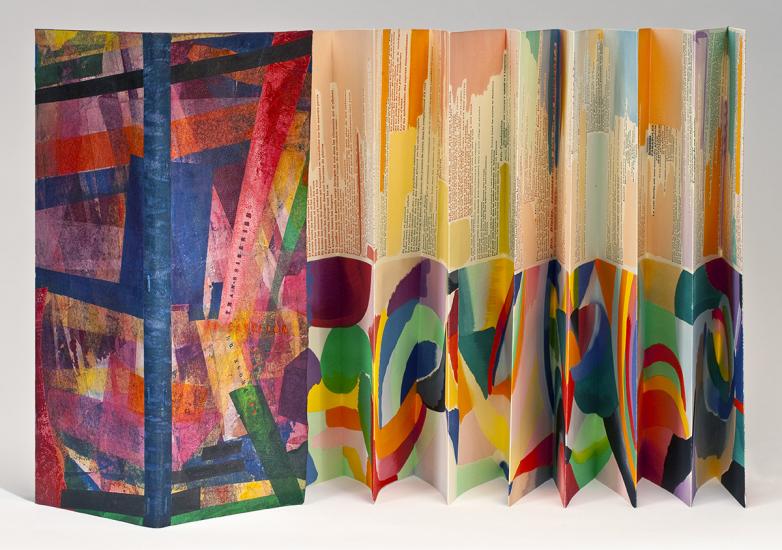 One of the twenty-two design bindings of La Prose that will be on display in San Francisco beginning September 6 is the work of binder Coleen Curry and shows pages of Kitty Maryatt’s La Prose pulled out.

In 1913, the poet Blaise Cendrars collaborated with artist Sonia Delaunay to produce La Prose du Transsibérien et de la petite Jehanne de France by letterpress and pochoir. The book became a landmark in the field of book arts, noted for its striking combination of avant-garde typography and abstract imagery.

The exhibition opens in San Francisco on September 6, with an opening reception at the San Francisco Center for the Book, 375 Rhode Island Street, on September 6 from 6:00-8:00 pm. Maryatt will also be leading a workshop at the SFCB over the weekend to introduce people to traditional French pochoir. Related events include a screening of a documentary produced about Maryatt's re-production of La Prose on October 4 from 6:00-8:00, again at the San Francisco Center for the Book. The original 1913 publication will also be on special exhibit on October 5 at Achenbach Foundation for Graphic Arts from 3:00-5:00 pm.

When it closes in October, the exhibition will travel, first to UCLA from October 12 through January 5, 2020, and then to Minneapolis, Boston, Montreal, and London in 2020 and 2021.