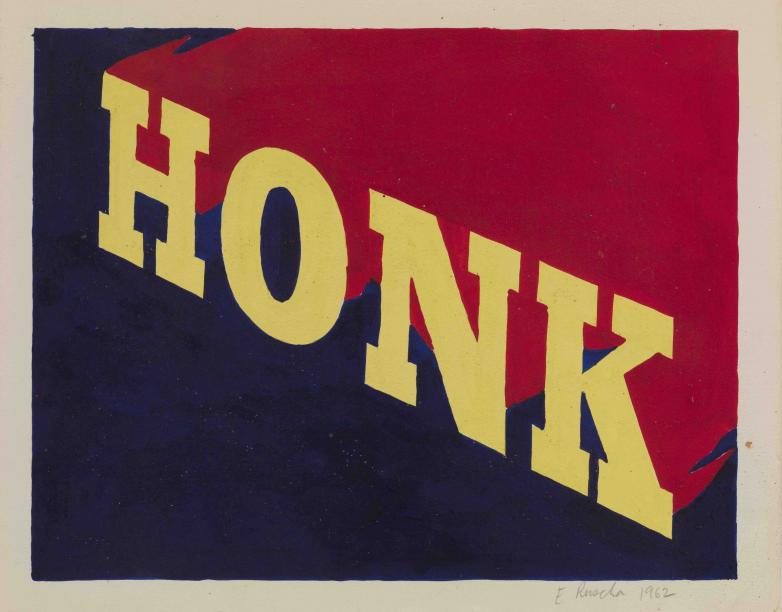 ARTIST ROOMS. Acquired jointly with the National Galleries of Scotland through the d’Offay Donation with assistance from the National Heritage Memorial Fund and the Art Fund 2008

A comprehensive display of Ed Ruscha’s artist’s books, text-based paintings, and photography opened in London last week at Tate Modern’s Blavatnik building. A Nebraska-born artist who defies categorization, Ruscha is adept in any medium, deriving inspiration from seemingly mundane architecture, topography, and mass media. Book collectors will be most familiar with his photobooks, e.g. Twentysix Gasoline Stations (1963), Various Small Fires and Milk (1964), Thirtyfour Parking Lots in Los Angeles (1967), and Nine Swimming Pools and a Broken Glass (1968), but this exhibition spans his six-decade career and includes some forty works on paper gifted to Tate by the artist following his 2015 promise to donate all future prints to the national collection.

“His text-based works, photographic series of urban landscapes and enigmatic artist’s books were hugely influential in the development of conceptual art in the 1960s and 1970s, and his sardonic takes on the banality of modern life continue to inspire generations of artists,” reads a statement released by Tate Modern.

Running through spring 2020, ARTIST ROOMS: Ed Ruscha draws from a touring collection of over 1,600 works of modern and contemporary art owned jointly by Tate and the National Galleries of Scotland.