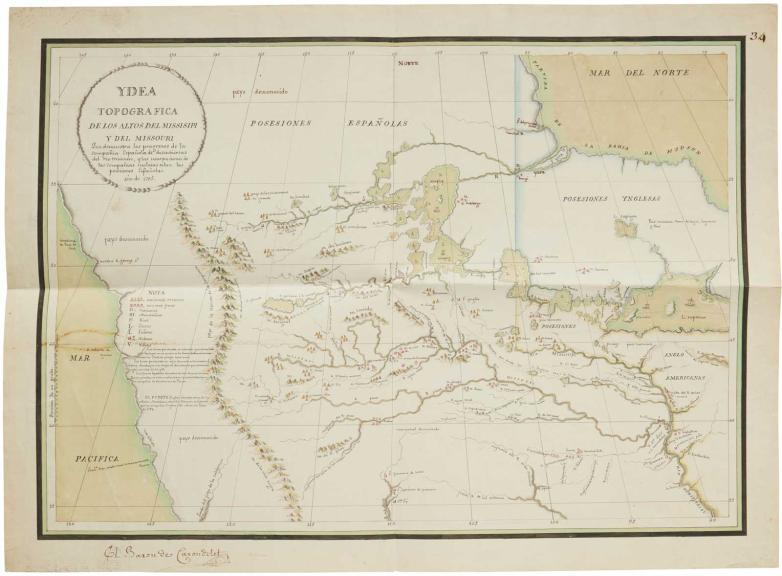 Antoine Soulard manuscript map of the upper Mississippi and Missouri Rivers, offered at Sotheby's this week.

Here are the auctions I'll be keeping an eye on this week:

There are some relevant lots in the Sotheby's New York Americana sale on Monday, January 23, including a 1927 publication agreement for Charles Lindbergh's book about his transatlantic flight ($15,000–20,000); a group of five seventeenth-century letters and documents about Britain's colonies in the American northeast ($15,000–25,000); a subscriber's copy of the octavo edition of Audubon's Quadrupeds in the original parts ($15,000–25,000); and several plates from the original edition of Audubon's Birds.

At Sotheby's New York on Tuesday, January 24, Fine Manuscripts and Printed Americana. Expected to lead the way is a 1795 manuscript map of the upper Missouri and Mississippi River valleys by the French surveyor Antoine Soulard. The location of this copy—the original sent by Soulard to the Spanish governor-general of Louisiana—was unknown for many years before it was sold at Sotheby's London in 1984 and subsequently acquired by the Karpeles Manuscript Library. It was saved from a 2019 fire at their St. Louis facility. The map was of major utility for the Lewis and Clark expedition: a copy with annotations by Clark is at Yale. The original is expected to sell for $1.5–2 million.  Three documents outlining the establishment of British New York, being an eighteenth-century copy of the Duke of York's appointment of Richard Nicolls as the first governor; the original 1674 appointment of Edmund Andros as governor; and a July 1, 1674 letter of instruction to Andros are estimated at $600,000–900,000. A copy of John Smith's True Relation (1608) with the earliest version of the title page is expected to sell for $400,000–600,000. At the same estimate is a copy of the September 7, 1790 issue of the Boston Herald of Freedom, containing the first printing of Washington's letter to the Jewish congregation of Newport, RI. Also included in this sale are a first book edition of The Federalist ($180,000–220,000); a volume of the laws of the United States passed between 1802 to 1805 owned and annotated by Thomas Jefferson ($180,000–250,000); and Audubon's working manuscript for his description of the Wild Turkey ($150,000–250,000).

Dominic Winter Auctioneers sell 482 lots of Printed Books, Maps & Documents on Wednesday, January 25. A seven-item Thomas Nashe sammelband rates the top estimate of £15,000–20,000. Another sammelband, this containing fifteen Restoration-period plays in two volumes, is expected to sell for £4,000–6,000. Some quite interesting sixteenth- and seventeenth-century English printing in this one, so it will be worth a watch to see how all that sells.

Arader Galleries holds their next auction on Saturday, January 28. The 179 lots include a set of Gould's Birds of Australia (1851–1869) previously owned by Chandos Leigh of Stoneleigh Abbey and collector Gerald Dorros, estimated at $500,000–600,000.