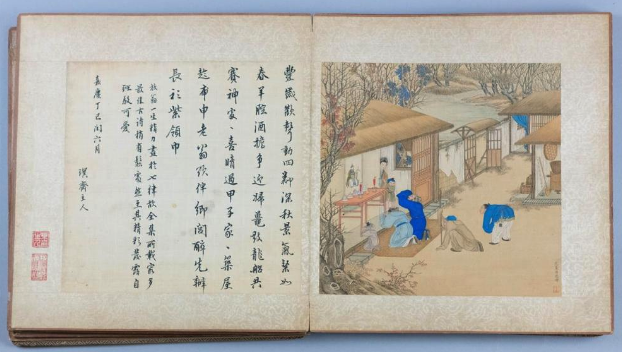 Album of Jiao Bingzhen illustrations offered at The Potomack Company on April 8.

The auction schedule continues to be a bit of a moving target as some sales are postponed, some are moved online, &c. Here are three of the currently scheduled sales (all to be held online):

The Potomack Company holds a single-item sale on Wednesday, April 8 of an album of 46 illustrations by Jiao Bingzhen (active 1629–1728). The images are mostly of farming and weaving activities. The album also contains the ownership stamps of Gong Qin Wang Yixin (1833–1898), a son of Emperor Daoguang. The prince was a well-known collector, and this album is estimated at $100,000–200,000.

On Wednesday, April 15, Doyle holds a 106-lot sale of Fine Literature featuring a Collection of Rudyard Kipling. A copy of the twenty-volume "Manuscript Edition" of The Writings of Henry David Thoreau (Boston: Houghton Mifflin, 1906), with two Thoreau manuscript leaves (one from his journals and one from Cape Cod) is estimated at $5,000–8,000. An autograph fair copy of Robert Louis Stevenson's poem "To Will H. Low" and a first issue copy of Kipling's Just So Stories in the rare original dust-jacket are each estimated at $3,000–5,000. Among the other lots are a signed first printing of Gone With the Wind in an unrestored dust-jacket ($2,500–3,500) and an early printing of the first American edition of War and Peace in the original paper wrappers ($800–1,200).