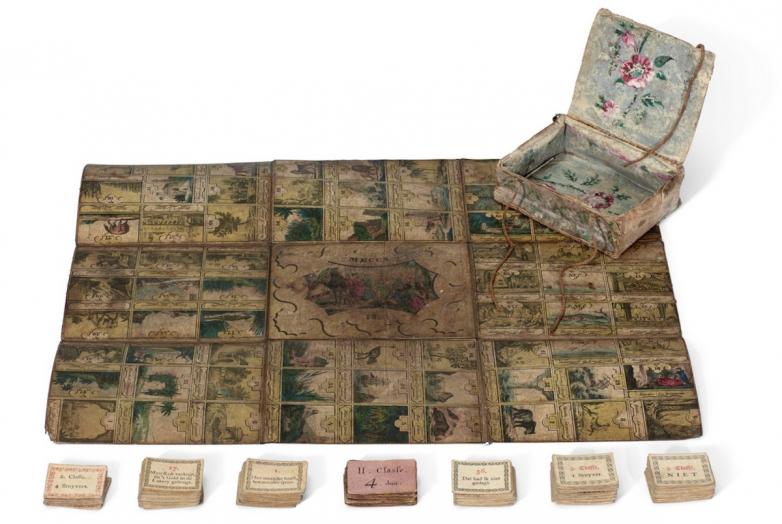 An early nineteenth-century board game that heads to auction in London later this month casts the religious pilgrimage in a playful light. Thought to derive from Germany, the game consists of a folding, linen-backed hand-colored engraving (the ‘board’) on which vivid scenes depict camels, deserts, mosques, and bazaars. Seventy-two numbered squares are marked by captions in German and French. Players roll the dice and move around the spaces in a spiral form, dodging wild animals, shipwrecks, and pirates until they arrive at #73, the center destination: Mecca.

The game, in its original paper-covered box, is a rarity. Sotheby’s says it has been “unable to trace another example.”

The auction estimate is £2,000-3,000 ($2,500+), conservative considering both its scarcity and the newfound appeal of board games in real life and in collecting circles. In our spring issue, columnist Ian McKay reported on the mid-nineteenth-century board game, Game of the Star-Spangled Banner, or Emigrants to the United States, which sold for $4,500 at Forum Auctions in late November. At that same auction, a game by the same maker, Edward Wallis, called New Game of Genius, or Compendium of Inventions connected with the Arts, Sciences and Manufactures was also on offer and sold for $5,000. Another example of that one turned up earlier this summer, again at Forum, selling for $7,620, as did one called the New Game of Wanderers in the Wilderness, which you’ll read more about in our next issue.