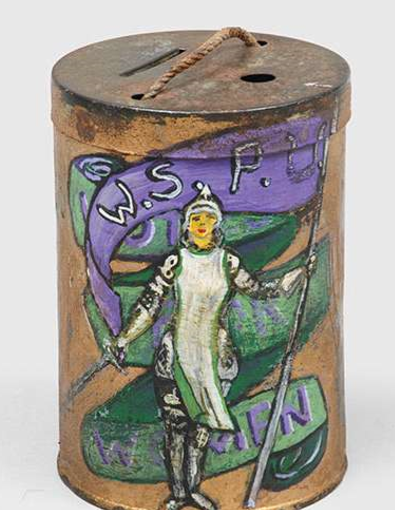 A hand-painted women’s suffrage donation tin (1908-17), to be offered at the CA International Antiquarian Book Fair this weekend for $2,600.

London — Peter Harrington, one of the world’s largest rare booksellers, is attending the California Antiquarian Book Fair, with a selection of rare books and unique objects each of which has a fascinating history. This year the California Book Fair is celebrating the 100th anniversary of Women's Suffrage in the United States and Peter Harrington will be displaying some items from the UK’s women’s suffrage movement.

•    Shakespeare’s rare Third Folio (1663);
•    Works by Homer (1488/89) including the Illiad and the Odyssey, two of the earliest, most important and influential works of European literature;
•    The first complete edition of The Birds of America by the great artist Audubon (1839-44);
•    First paperback edition of the first Harry Potter book (1997) which appeared at the same time as the hardback edition;
•    First edition of Brighton Rock by Graham Greene with its extremely rare pink dust jacket (1938);
•    First edition of the “bible” of the women’s suffrage campaign History of Woman Suffrage by Susan B. Anthony;
•    First edition of Rosalind Franklin's groundbreaking research paper contributing to the identification of the double helix structure of DNA (1953);
•    A women’s suffrage hunger strike medal (1912).

Pom Harrington, the owner of Peter Harrington London, says “We are bringing over a hundred items to exhibit in California, selected to appeal to visitors to the fair. Highlights include a remarkable edition of Shakespeare’s works, the editio princeps of Homer’s works, the first complete edition of Audubon’s Birds of America, and a number of rare books and items from the UK’s women suffrage movement. We encourage visitors to the fair to contact us if they have any items for sale they would like us to appraise.”

The California Book Fair is being held at the Pasadena Convention Center, 300 East Green Street, Pasadena, CA 91101 on: