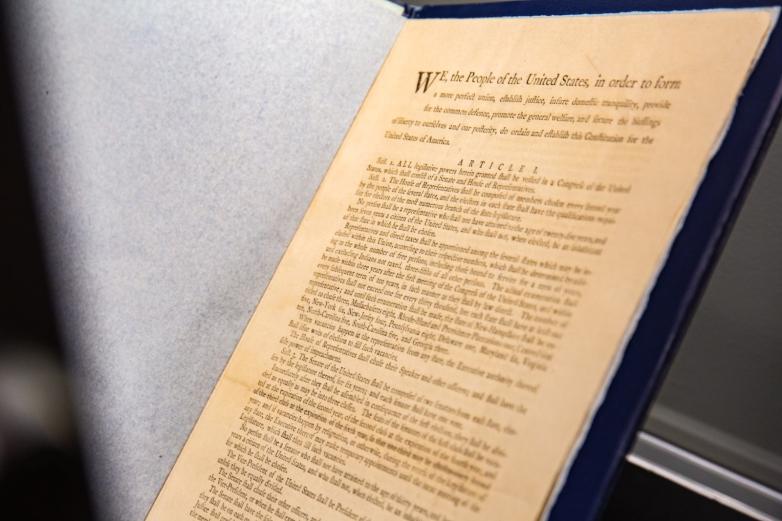 235 years ago, America’s Founding Fathers signed the United States Constitution at Independence Hall in Philadelphia, marking the formation of the country’s most significant and lasting document—as well as the longest continuing charter of government in the world. Sotheby’s unveiled one of only two known copies of The Official Edition of the Constitution, the First Printing of the Final Text of the Constitution that are in private hands, which will come to auction for the first time in more than 125 years in a dedicated live sale in New York on December 13.

The announcement follows the historic November 2021 sale at Sotheby’s of the Goldman Constitution, the other privately owned copy of the official first printing of the Constitution, when it sold for a milestone $43.2 million and established a new record for any book, manuscript, or printed text sold at auction.

The present copy of the Constitution has a particularly intriguing provenance as it seems to be the very first copy to have been recognized by the historical and collecting communities as an example of the Official Edition of the Constitution. It last appeared at auction in Philadelphia in 1894, as part of the legendary collection of Charles Colcock Jones, a Georgia lawyer, politician, and amateur historian.

The Constitution was acquired as a gift for the young Adrian Van Sinderen (1887-1963) and spurred his early interest in American history and book collecting. Van Sinderen later received encouragement from from his wife’s uncle, William Augustus White, one of the titans of American bibliophily. Van Sinderen himself became one of the most accomplished, if now little recognized, book collectors of the mid-twentieth century.

Van Sinderen was more interested in promoting various civic and educational endeavors (including the Van Sinderen Book Collecting Prizes for undergraduates at Yale) than in publicizing his own collection. But he was, nonetheless, an extraordinary collector—he was the last individual to own a copy of The Bay Psalm Book, 1640, the first book printed in British North America, until Sotheby’s sold a duplicate copy belonging to Boston’s Old South Church to David Rubenstein in 2013. (Van Sinderen’s copy, one of just eleven that survive, was given to the Library of Congress after his death.)

Coming to auction this December for the first time in more than 125 years, with an estimate of $20/30 million, matching the most significant estimate ever placed on a historic document offered at auction, the present copy of the Constitution is extremely rare, and is one of just 14 known copies of the official printing produced for the delegates of the Constitutional Convention and for the Continental Congress, with 12 of those copies in renowned institutional and government collections. The other copy was acquired last November by Kenneth Griffin, Founder and CEO of Citadel, who then loaned the document to Crystal Bridges Museum of American Art for their exhibition, “We the People: The Radical Notion of Democracy.”

The sale of the Constitution in November 2021 created a unique cultural phenomenon that generated news headlines around the world – more than 12,000 media stories to date – following the historic crowdfunding effort of ConstitutionDAO, a decentralized autonomous organization created for the express purpose of raising money to acquire the Constitution at auction. With more than 17,000 contributors who, in a matter of only weeks, raised more than $40 million combined in Ether cryptocurrency, the DAO’s crowdfunding efforts, fueled by social media conversation on Discord and Twitter as well as traditional media exposure from major international news outlets, was the most significant crowdfunding initiative ever undertaken. Ultimately, the DAO was outbid by Mr. Griffin, who was bidding anonymously during the auction through Brooke Lampley, Sotheby’s Chairman and Worldwide Head of Sales for Global Fine Art, with the final selling price reaching $43.2 million—an unprecedented milestone for a historic document at auction.

Attracting viewers from around the world, the much-anticipated live auction was Sotheby’s most watched auction of all time, galvanized by the legions of ConstitutionDAO contributors and supporters, primarily from the crypto and tech communities, as well as curious onlookers who tuned in to watch an auction first: a DAO’s participation in a major auction.

Selby Kiffer, Sotheby’s International Senior Specialist for Books & Manuscripts: “Having had the honor of offering the Goldman copy of the Constitution at auction twice before, first in 1988 and again last year, it is an immense honor to bring to auction the only other copy of the first printing of the Constitution remaining in private hands. Copies from the first printing have only appeared at auction a handful of times since they were first printed and issued to delegates more than 200 years ago, so the appearance of this copy on the market is truly a special moment. While the lasting importance and relevance of the Constitution is often an anodyne talking point today, the fact remains that it is unequivocally the most significant document in United States history, and one that will continue to influence the future of democratic principles in America and around the world.”

As relevant and contemporary as it was in 1787, and still hotly debated, the Constitution put into law the promise of the Declaration of Independence and marks the final step in our country’s transformation from British colonists to an American nation. The first printing of the Constitution of the United States is considerably rarer than the first printing of the Declaration of Independence, one of the few documents in history to which it can be compared in terms of significance and influence.

In February 1787, following the inconclusive Annapolis Convention the year before, the Continental Congress called for a convention to meet in Philadelphia in order to revise the Articles of Confederation, the country’s first, and largely inefficient, national charter. Meeting in secret, the delegates, presided over by George Washington, instead drafted an entirely new
Constitution. Two early “draft” versions were printed for the committees of Detail and Style for the purposes of discussion and revision. After four months of labor, the final text was agreed to and printed for submission to the Continental Congress, with copies distributed to the delegates to the Constitutional Convention for use at their discretion. This “Official Edition” is the first printing of the final text of the Constitution. Printed in an edition of approximately 500 copies by John Dunlap and David Claypoole, the official printers to the Convention, only 14 copies are now known to exist, and of those, just two copies remain in private hands.

Some of them still in the archives of the states to which they were originally dispatched in September 1787, including the Delaware Hall of Records, the New Jersey State Archives, the Historical Society of Pennsylvania, and the Public Records Office in London, England. Other copies are now housed in repositories to which their original recipients’ papers were deposited: one of Benjamin Franklin’s copies is at the American Philosophical Society in Philadelphia, which he founded; and copies originally belonging to James Madison and Edmund Pendleton are now part of their respective archives in the Library of Congress. The Official Edition also prints the Convention's accompanying resolutions and its letter, over the name of George Washington, to Congress submitting the Constitution for consideration.

The present sale marks only the third copy of the first printing of the Constitution to ever come to auction. One such previous sale was one of the several copies given to George Washington, the President of the Constitutional Convention, and bears one correction in his handwriting. (Washington was probably granted a large number of copies; as it was recorded in his correspondence that he sent copies of the Constitution to fellow Virginians Patrick Henry, Benjamin Harrison, and Thomas Nelson, although none of these is known to survive.)

The extant Washington copy was acquired by the great Philadelphia bookseller A. S. W. Rosenbach sometime prior to 1940, when it was sold to Henry Flynt. Flynt subsequently donated this Constitution and a number of other significant American documents to be sold for the benefit of the Heritage Foundation (now Historic Deerfield) by Sotheby’s predecessor, Parke-Bernet, on 17 November 1964, and is now at Independence National Park, Philadelphia. The other copy to appear at auction is the Goldman copy, which was sold twice by Sotheby’s, first in 1988 and again in November 2021, when it set a world auction record for any item in the category of books and manuscripts.

The present copy of the Constitution has not been available for purchase for more than a century and has been little seen since it was first printed more than 200 years ago. The exhibitions of the Constitution at Sotheby’s before the forthcoming auction in December will mark the first time the document has gone on public view since 1987, when it was part of Stanford University’s exhibition “To Frame A Union: A Collector’s View of the Constitution in Its Bicentennial.”