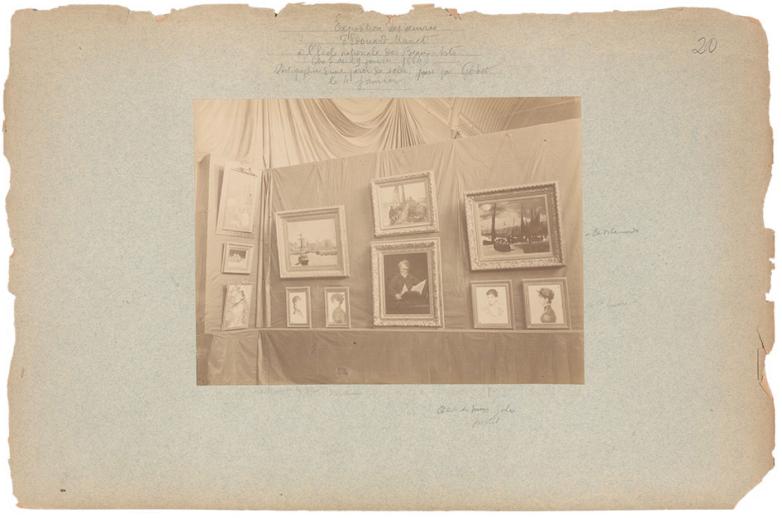 An installation photograph from the posthumous exhibition of Manet's work at the École des Beaux-Arts, January 4, 1884.MA 3950, Godet vol. 2. Purchased as the gift of Mrs. Charles
Engelhard and children in memory of Mr. Charles Engelhard, 1974.

New York – The Morgan Library & Museum is pleased to announce the digitization of five albums containing historic photographs of work by the artist Édouard Manet (1832–1883). These albums are part of the Adolphe Tabarant collection, acquired by the Morgan in 1974 as the gift of Mrs. Charles Engelhard and her children in memory of Mr. Charles Engelhard (1917–1971). The collection also includes books from Manet’s personal library, many letters to and from the artist, and his only surviving sketchbook, which the Morgan digitized and made available on its website in 2019. This initiative underscores the Morgan’s ongoing commitment to scholarly initiatives through its digitization projects.

The digitized albums include: the Lochard albums (3 vols.) and the Godet albums (2 vols.). The Lochard albums feature photographs taken by Fernand Lochard (1824–1889), whom the artist’s family commissioned to document the paintings, pastels, drawings, and prints in Manet’s studio immediately following his death in April 1883. The Godet albums contain photographs of Manet’s work taken either by Manet himself or by the Parisian firm Godet et Compagnie. With the goal of making this invaluable resource fully accessible, all works represented in the albums have been identified with titles and catalogue raisonné numbers listed alongside the digitized images.

In addition to photographs, the Lochard albums contain significant annotations that are a rich source of information about the works and their history. These were added over time, first by Léon Koëlla Leenhoff (1852–1927), the son of Manet’s widow, Suzanne Manet; then by art critic and dealer Théodore Duret (1838–1927); and still later by art historian and journalist Adolphe Tabarant (1863–1950). Moreover, as these photographs were taken right after Manet’s death, they have enabled scholars to determine the degree to which certain paintings were reworked or finished by someone other than Manet in the years that followed.

“The Morgan is committed to bringing its scholarly resources, such as the Tabarant collection, to the widest possible audience,” said Colin B. Bailey, Director of the Morgan Library & Museum. “As part of the museum’s ongoing digitization efforts we are pleased to provide scholars and enthusiasts with the opportunity to access this exceptional cache of photographs. While the albums were long known to Manet specialists, they were only available upon consultation at the Morgan itself. Now a far larger constituency will be able to explore these unseen aspects of Édouard Manet’s practice from the comfort of their own homes.”

“These digital facsimiles make essential sources on Manet’s work available to the world at large. We are excited to see how scholars, artists, students, and others utilize these materials, and we look forward to making more of the Tabarant collection accessible to the public over the next few years,” said Sal Robinson, the Morgan’s Lucy Ricciardi Assistant Curator of Literary and Historical Manuscripts.