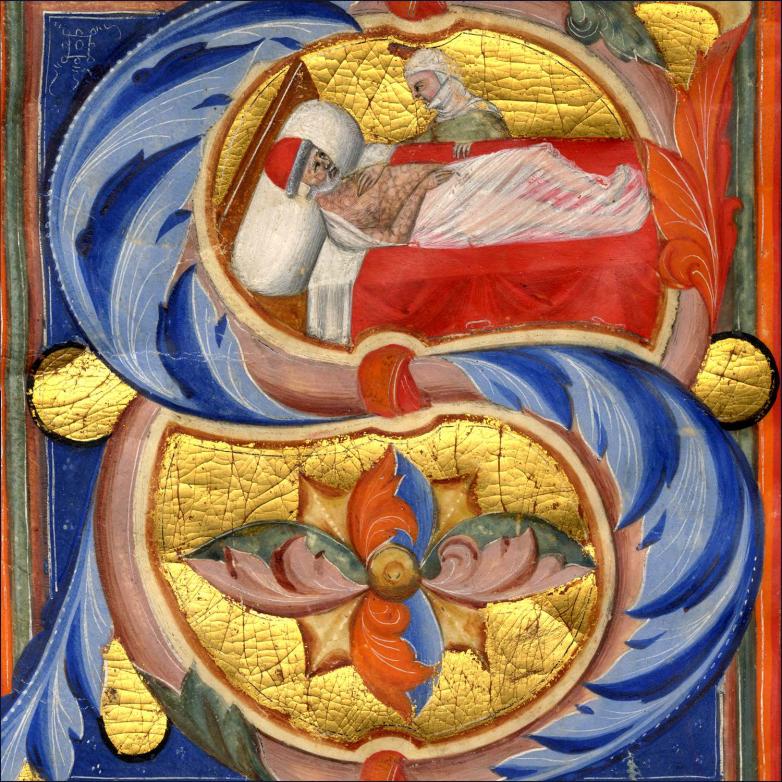 New York — Why do we collect? What do we collect? How do we collect? This exhibition encourages visitors to pose these questions as they view the nearly three dozen diverse medieval and Renaissance illuminations dating from the twelfth through the sixteenth centuries.

So, we encourage visitors to this exhibition, as they appreciate the miniatures on the walls, to ask themselves what their "personal thing" is and, perhaps, to ask themselves why. Will it be the sheet from a Choir Book that depicts Job visited by his wife painted with an in-tense palette and bright gold leaf by the Second Master of the Strozzi Breviary? While Job reclines in bed, sores covering his body, fantastic hybrid figures with bearded faces inhabit the margin and a musician plays kettle drums in the lower right. Those with back-grounds in the practice of art might be drawn to the skillful portrayal of the faces and drapery, reminiscent of ltalian gold ground panel painters. Musicians might appreciate the implied contrast between the sacred music sung in church and the secular music that reverberates in the ltalian courts and city streets.

Dramatic moments are vividly depicted in a full-page miniature from the thirteenth century showing scenes from the Lives of Four Apostles. Even if the stories, which entail episodes of boiling, flaying, and goring of saints, are mostly unfamiliar to a modern audience, viewers cannot help but be struck by the bold rendering of the figures who stand out on the thick gold ground, contained by the blue border, as though on the stage in a theatre. A limited palette of blue, brownish-red, and green and sparse modelling creates color fields with-in each of the pods divided on two registers. What's your pleasure? Does the abstract rendering of this miniature capture your attention? Or perhaps its historical context in Paris in the age of the Cathedrals strikes a chord?

Bold color and vivid hatching characterize another French miniature that presents a realistic depiction of the Virgin nursing the Christ Child. The naturalism of the scene is enhanced by the window-like ledge behind which the half-length figure stands framed by architectural pilasters. Details such as the jewels in her crown and the creamy tone of her skin encourage not only devotion but appreciation, as she appears to inhabit our own space. This fifteenth-century painter was active to the southeast of Paris between Lyon and Grenoble. If realistic portrayals are more your "personal thing," then perhaps this page will captivate you.

A multitude of other factors can influence your "personal thing" --the subject matter, color, historical period, rarity (for connaisseurs already familiar with this sector of the art market), even framing. Come and gaze at these high-quality illuminations from France, Germany, Austria, and ltaly, learn more about this rare field, and tell us what is your "personal thing." As an unusual experiment we will keep a tally (anonymous of course) of what each visitor chooses and announce the "personal things" on our website after the show. The results will undoubtedly be interesting and infinitely diverse.