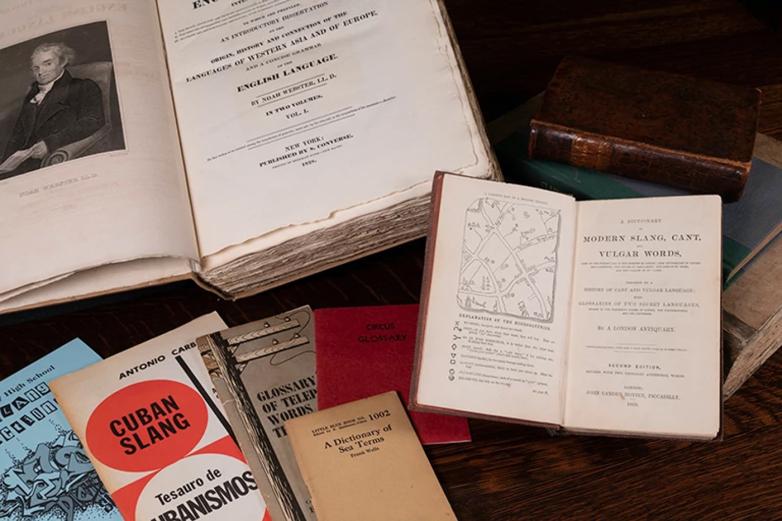 Bloomington, IN — As National Dictionary Day approaches on Oct. 16 -- the birthday of Noah Webster -- Indiana University's Lilly Library has established the Merriam-Webster Archive from business correspondence recently acquired as part of the Madeline Kripke Dictionary Collection.

Kripke, known as the "Dame of Dictionaries," kept a stockpile in her New York City apartment of more than 20,000 linguistic books and ephemera that was often referred to as the world's largest and finest dictionary collection. She died in April 2020 without realizing one of her stated aspirations: establishment of a public dictionary library.

There's where Michael Adams, Provost Professor and chair of the Department of English in the College of Arts and Sciences on the IU Bloomington campus, comes in. He'd met Kripke through the Dictionary Society of North America; after she died, he began collaborating with Lilly Library Director Joel Silver to acquire her collection.

"It was of primary importance to the community of dictionary people that the collection stay together," Adams said. "But we knew Madeline would have wanted the collection to end up at a public university, where all the very rarest materials would be available to everyone."

The Kripke Collection will join three other collections that have already established the Lilly Library as a destination for dictionaries: the Breon Mitchell Collection of Bilingual Dictionaries, 1559-1998; the Eric Partridge Archive, 1914-1966; and Clarence L. Barnhart Dictionary Archive, 1929-2005. The latter two collections are still to be processed.

Having successfully acquired the Kripke Collection, the Lilly Library will now spend decades of its own unlocking the connections in the collection. Only about 6,000 volumes have been inventoried, likely less than one-third of the final total. It's a challenge that librarians and faculty look forward to once the materials arrive in Bloomington.

"We're very pleased to be able to preserve Madeline Kripke's remarkable collection here at the Lilly Library," Silver said. "We'll always be grateful for her unrivaled knowledge and dedication, which enabled her to assemble this matchless resource. We look forward to making it available to all interested researchers and visitors for many decades to come."

In addition to her many dictionaries, Kripke also held an uncatalogued trove of correspondence and business records from the Merriam-Webster company, which will now form the Lilly Library's Merriam-Webster Archive. It is believed to include the original letter speculating on the benefits of purchasing Webster's 1841 edition of An American Dictionary of the English Language, Corrected and Enlarged. Webster is best-known for publishing the first American dictionary in 1806, a copy of which resides at the Lilly Library. The Lilly also owns an author-presentation copy of Webster's 1828 An American Dictionary of the English Language.

Known around the world, IU Libraries' Lilly Library is home to collections of cultural and literary artifacts illuminating humanity's highest achievements. Its collections include 480,000 rare books, 8.5 million manuscripts and one of the world's largest mechanical puzzle collections.

A full-scale interior renovation, completed in June 2021, reimagined the iconic facility on the IU Bloomington campus to attract modern learners.