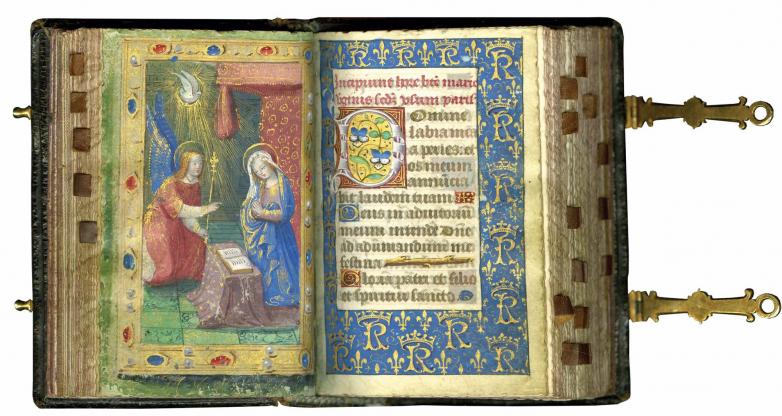 The Petites Heures of Charles VIII, King of France (r. 1483-1498), one of five extant manuscript Books of Hours known to have been made for the personal use of the king. In Latin, illuminated manuscript on parchment. Paris, c. 1490-1493.

New York — Les Enluminures will be exhibiting a large variety of art works at this year's edition of TEFAF Maastricht, including illuminated manuscripts, manuscript leaves and cuttings, and medieval and Renaissance jewelry.

A special exhibition on the stand features sixteen remarkable jewels once worn by the elites of Europe. Accompanied by a catalogue "Living nobly": Jewelry of the Renaissance Courts, the exhibition includes hat badges, neck-laces and chains, pendants, rings, and amulets.

There is for example a Saxon Ribbon Chain that evokes the paintings by Lucas Cranach, a precious mother-of-pearl medal-lion of King Henry IV, and a gimmel ring, restituted to the Rothschild family following WWII. Many of these jewels are well known, previously published and exhibited. Glittering with precious metals and gems, all the jewels in this collection continue to reflect how the nobility of the Renaissance courts "lived nobly" while also resonating in new ways today.

In keeping with the theme of the most elite objects from Renaissance courts, a sumptuous royal Book of Hours, the Petites Heures of Charles VIII, is exhibited for the first time. One of only a few known manuscripts made for the king Charles VIII, it was illuminated in Paris by the Master of the Chronique scandaleuse, regarded as the most innovative artist active in late fifteenth-century Paris. It marks the dawn of a renewed trend for minute masterpieces of parchment made for members of the royal family and court.

Founded by Dr. Sandra Hindman nearly thirty years ago and with locations in Paris, Chicago, and New York, Les Enluminures has forged long-standing relationships with major museums and prestigious private collections throughout the world. It exhibits at TEFAF Maastricht, Masterpiece, Frieze Masters, and the Winter Show. The gallery is well-known for the level of its scholarship but also for the diversity, high quality, and provenance of the works it offers for sale.

Sandra Hindman states: "We are delighted to be returning to TEFAF Maastricht, which remains the premier art and antiques show, setting a standard unequaled the world over."