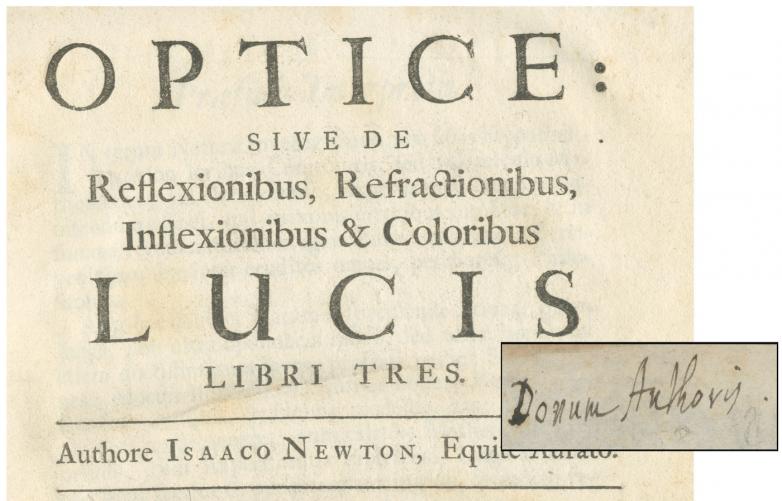 Title page of Opticks (Optice in this, the first Latin-language edition) by Isaac Newton overlaid with ‘Donum Authoris’ (gift of the author) in Wickins handwriting.

London — Isaac Newton’s early years at Trinity College Cambridge were marred by a falling out with his chamber-fellow (or roommate). Brooding on this unfortunate state of affairs one day in the College walks, he bumped into a fellow undergraduate – John Wickins. On striking up a conversation, he discovered that Wickins faced the same predicament. The two men decided to room together. From 1665-1683 Newton and Wickes not only shared chambers but also became friends and colleagues. Wickins functioned as Newton's amanuensis, copying up his notes, turning their rooms into a laboratory and acting as his unpaid assistant, a task which was often arduous and dangerous. Many years later Newton recalled his youthful friendship by sending Wickins presentation copies of two of his most important works. These will be offered at Bonhams Fine Books and Manuscripts sale in London on Thursday 24 June. Principia Mathematica is estimated at £40,000-60,000 and Opticks (Optice in this, the first Latin-language edition) at £30,000-50,000.

Bonhams Head of Fine Books and Manuscripts, Matthew Haley, said: “It has been assumed that when Wickins left Cambridge in 1683-84 to take up a living as a clergyman in Monmouthshire that his relationship with Newton effectively ceased. These two presentations copies show that, in fact, his old friend remained very much in Newton’s mind nearly 40 years after they roomed together. The copy of Opticks has a particularly personal significance. Newton and Wickins had worked together on Newton's third telescope – the so-called 'Newton-Wickins' telescope – built in 1671-72, and it was this telescope that Newton had by him when he was writing the four Lucasian lectures which appear in Opticks.”

Newton’s Philosophiae naturalis principia mathematica (Mathematical Principles of Natural Philosophy) first published in 1667 is one of the most influential books in the history of science, establishing the laws of motion and universal gravitation. The copy in the sale is from the second Cambridge edition published in 1713. Opticks: or A Treatise of the Reflexions, Refractions, Inflexions and Colours of Light first published in 1704 expounds Newton’s theory of colour based on the observation that a prism separates white light into colours. The copy Newton presented to Wickins is from the first Latin-language edition produced in 1706.