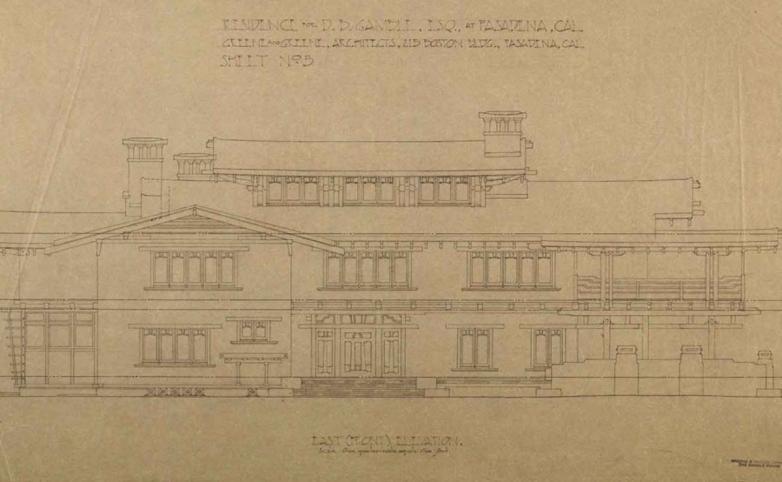 East (front) elevation of the Gamble House, the iconic 1908 American Craftsman home in Pasadena designed by the Greenes.

“We are thrilled by this gift from the Gamble House Conservancy,” said Sandra Ludig Brooke, the Avery Director of the Library at The Huntington. “The Greene & Greene Archives will be an important addition to the Library’s strong and diverse holdings in Southern California architecture, which includes the papers of Wallace Neff, Roger S. Hong, and Samuel Lunden; the firm of Morgan, Walls & Clements; and landscape architects Florence Yoch and Lucile Council, among others. The depth and range of these materials offer incredible resources to scholars, particularly those studying the golden age of Los Angeles architecture in the early 20th century, and to those with a practical interest in Greene & Greene, including property owners and preservationists.”

The Greene & Greene Archives were established in 1968 to bring together drawings, photographs, and other records of the Greenes’ work. The core of the initial collection was a gift by the Gamble family of materials related to the now-famous residence commissioned by David and Mary Gamble. Over the years, more than 400 additional donors have contributed to the collection, most importantly the families of Charles and Henry Greene themselves, who have donated personal correspondence, family photographs, drawings and sketches, and numerous other materials. Other clients and later owners of Greene & Greene buildings have generously given drawings and other records, and additional collections within the archives document Southern California architecture more broadly.

The archives also complement a permanent Greene & Greene exhibition, established in 1990 in partnership with the Gamble House, that explores the breadth of the brothers’ artistic vision. Highlights of that installation in The Huntington’s American art galleries include the reassembled stairway from the Arthur A. Libby House (1905) and a re-creation of the dining room of the Henry M. Robinson House (1905–07) with the original furniture.

Edward R. Bosley, who retired this month as executive director and CEO of the Gamble House Conservancy, was the guiding force behind the gift—one that he sees as the natural culmination of a rewarding, three-decade partnership between the two institutions. “The collegial relationship that the Gamble House has enjoyed with The Huntington for so long has made it possible to collaborate on a range of educational opportunities that have benefited the public and researchers alike,” Bosley explained. Notable among these have been the exhibitions “A ‘New and Native’ Beauty: The Art and Craft of Greene & Greene” (2008), with its related publication, and “Yasuhiro Ishimoto: Bilingual Photography and the Architecture of Greene & Greene” (2016), which included the institution’s first bilingual English/Japanese gallery guide (2016).

Charles Sumner Greene (1868–1957) and Henry Mather Greene (1870–1954) grew up in St. Louis and received their early architectural training and apprenticeship in Boston. After moving west to Pasadena in 1893, they opened their own practice and established a reputation designing residential projects of incomparable beauty, collaborating with highly skilled craftspeople and artists and forging a new path for American architecture. Notable projects included houses for James Culbertson (1902 and later), Mary Darling (1903), Theodore Irwin Jr. (1906), Robert R. Blacker (1907), David Gamble (1908), William Thorsen (1909), and Charles Pratt (1909). The firm was officially dissolved in 1922, as each brother pursued independent projects. Although their work was largely forgotten between the wars, the Greenes lived to see renewed recognition of their achievements after World War II, when they were honored by the American Institute of Architects, Southern California Chapter (1948) and by the national AIA (1952).

Among the many unique original items in the archives are watercolor renderings of designs for stained glass by Charles Greene; an early photograph of David and Mary Gamble visiting the site of their future home with Charles Greene, circa 1907; architectural plans for the Gamble House as well as photographs documenting the construction; and account books kept by Mary Gamble that break down the costs of furnishings and fixtures for the house. (A mahogany armchair for the living room is listed at $92.56, two bookcases for $356.79, and a table for precisely $204.04.) Other Greene & Greene commissions are also well represented in the archives, including the Pratt residence in Ojai, California, and the Blacker House in Pasadena.

Erin Chase, assistant curator of architecture and photography at The Huntington, noted that these materials have great research potential in themselves, but their value is magnified within the context of The Huntington’s broader resources for scholars. “Acquiring the Greene & Greene Archives allows us to situate the material among our many other collections related to architecture and design, the Arts and Crafts movement, and the history of our region more generally,” Chase said. “Having the collection fully integrated into the Library gives us the ability to link it to our online systems, making it more findable and searchable, and puts it into context within our collecting strengths as a whole.”

A finding aid to the archives is available on the Online Archive of California database. Research inquiries can be directed to reference@huntington.org.