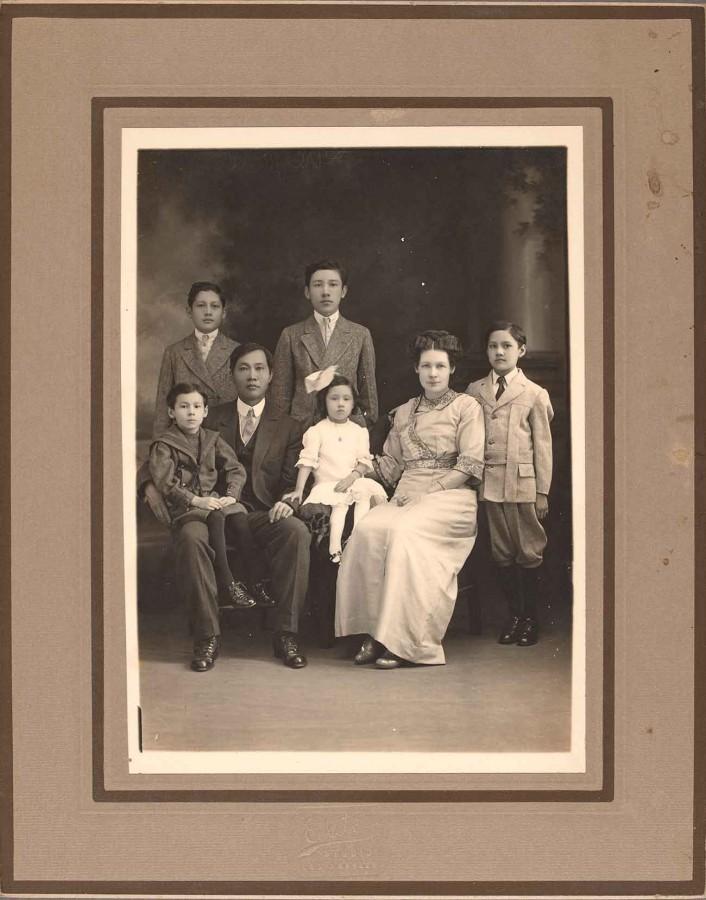 Portrait of the See Family, including Fong See (second from left) and Letticie "Ticie" Pruett (second from right) and their five children, 1914. Unknown photographer.

San Marino, CA — The Huntington Library, Art Museum, and Botanical Gardens announced today that it has acquired the papers of Gilbert, Florence, and Leslee See Leong, members of two of the earliest and most prominent Chinese American families in Los Angeles: the Leong family and the See family. The See family's story was chronicled by novelist Lisa See (b. 1955) in her nonfiction memoir, On Gold Mountain: The One-Hundred-Year Odyssey of a Chinese-American Family.

The collection includes the papers of the Leong family, including Gilbert Leong (1911–1996), a major Chinese American architect in his time and one of the founders of East West Bank; his wife, Florence See Leong (1909–1989); and their daughter, Leslee See Leong (b. 1945), the current owner of F. Suie One Co., a highly regarded Asian antique store in Pasadena, California. The store was established in 1888 and is believed to be the oldest continually operating Asian antique business in the Los Angeles area.

The collection also contains materials from the See family, a small number of architectural drawings by Gilbert Leong, and drawings by the Chinese-born American painter, animator, muralist, and lithographer Tyrus Wong (1910–2016), famous for his contributions to animated films, including The Walt Disney Co.’s “Bambi” (1942). Among Wong’s works in the collection are drawings, calligraphy, homemade Christmas cards, and a set of hand drawn menus that he designed for the See family, who owned the Dragon’s Den restaurant near Chinatown.

Highlights of the newly acquired materials include portrait photos of Fong See, the patriarch of the See family, in Sacramento during the 1870s; a family portrait of him with his wife Letticie Pruett and their five children; and photos of the family on a trip to China in the 1920s and the passports they carried. In addition to family correspondence, there are photos of store merchandise from 1910–1920, business letters, and many photos of Fong See’s antique shops around Los Angeles.

“Fong See came to the U.S. in the 1870s,” said Li Wei Yang, curator of Pacific Rim collections at The Huntington. “He established himself at first in Sacramento by producing and selling fancy underwear for Chinese and American prostitutes. He later met and married Pruett, who encouraged him to pursue other enterprises. They eventually moved from Sacramento to Los Angeles and founded their antique store, F. Suie One Co.”

Many of the materials in the collection relate to the F. Suie One business, including a shipment manifest and other business records from the 1930s; business cards, boxes, and paper bags; photos of store branches across Los Angeles; and exterior and interior photos of F. Suie One Co. locations during the 1960s.

The Huntington houses an array of materials for the study of the Pacific Rim. Geographical coverage is strongest for China, Hawaii, Japan, the Philippines, and California, with a current collecting emphasis on Japanese American and Chinese American history in Southern California. Previous acquisitions include the Hong Family Papers, donated in 2006, which contain the legal files of Y. C. Hong, one of the first Chinese American immigration attorneys in California and the United States. The Hong papers include immigration files related to Fong See’s journey to China in the 1920s to visit relatives and purchase antiques for his business.

“As scholars have shown more and more interest in studying the migration and ethnicities of individuals and communities along the Pacific Rim, The Huntington has increased its focus on collecting materials that support such research,” said Sandra L. Brooke, Avery Director of the Library at The Huntington. “The Gilbert, Florence, and Leslee See Leong archive fits perfectly with the Library’s collecting initiative and will provide scholars with excellent material for better understanding the Chinese American experience in both a regional and transpacific context.”