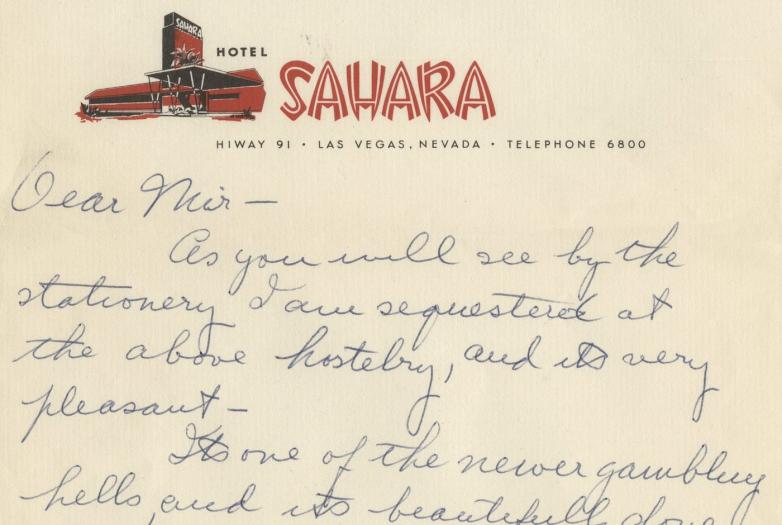 One of 200 handwritten and typed letters, postcards, and telegrams from Groucho Marx to his daughter Miriam headed to auction in Dallas. Opening bid: $40,000

This is no joke; no monkey business here. The only punch line here is the bottom line: Some of the most astonishing pieces belonging to the man born Julius Henry Marx can be found in Heritage Auctions’ star-studded Entertainment & Music Memorabilia Signature Auction taking place July 16-18. No one’s pulling anyone’s leg, if that’s your idea of a good time.

Look no further than the signature glasses down his nose: Included here are the very round, silver wire-rim frames Groucho wore in the later Marx Brothers films made for MGM, among them At the Circus, Go West, The Big Store and Groucho, Chico and Harpo’s penultimate big-screen appearance during which they spent A Night in Casablanca. Marx wore them, too, during stage, screen and radio appearances throughout the 1940s, around the time he stopped wanting prop glasses and started needing prescription ones.

Those glasses, as much a Marx trademark as any one-liner, cigar or can of greasepaint, would be the centerpiece of this or any other auction. But here, we’re only getting started. Before we’re done we’ll show you a thing or three.

Or in the case of Groucho’s missives to daughter Miriam, 200 handwritten and typed letters, postcards and telegrams -- not all of which appeared in the 1992 collection Love, Groucho: Letters from Groucho Marx to His Daughter Miriam. As Dick Cavett wrote in his introduction to that essential book, these letters show another side of Groucho, “another dimension of this complex genius that you won’t find anywhere else, and a side of him many will find surprising.”

Which is to say: There’s considerable warmth contained within these letters, many of which are written on the letterheads of hotels, the crackling handiwork of an absent father to a distant daughter and not a wise-cracking comedian to his adoring audience. The letters, which Miriam gifted to an acquaintance before her death at 90 in 2017, were written between 1938 and 1967, and Groucho most often signed them “Padre” or “Doc Hackenbush”, a nod to his character in A Day at the Races.

"There is another side of this nauseating character,” Groucho wrote in one of the missives. “The father and stern parent, head of household, bulwark of the American home, ready at a moment's notice to fight for Old Glory and the land he loves.”

“Reviewing the letters now I find them to reveal an intensely loving relationship between Groucho and me,” Miriam wrote in the book’s introduction. “For me these letters are evidence that we loved one another very much. I am proud of my father and happy to share these marvelous letters.”

Speaking of A Day at the Races, the very black wool topcoat Groucho wore as horse doctor Hugo Z. Hackenbush in that 1937 film is also included in this auction, shortly after its recent exhibition at the National Comedy Center in Jamestown, N.Y. This wasn’t a one-off swallowtail, either: Marx wore this coat across the country in the 1940s during MGM publicity photo sessions, radio broadcasts and in-person appearances, including a stint as part of the Hollywood Victory Caravan.

And what good are Groucho’s glasses and topcoat without something in which to keep a good cigar – and Marx did smoke the very best, not the good quarter cigars Chico jokes about in Duck Soup. As Groucho’s son Arthur wrote in Cigar Aficionado in the spring of 1993, the old man smoked Havanas and kept “in a large humidor in his upstairs study … a trove of the most expensive cigars money could buy -- mostly Dunhills. There were light cigars for after lunch, and heavier, more pungent ones for after dinner. The latter were his favorites--especially the 410s. He also kept on hand a box of extra-sized cigars called Belindas. These, I believe, were the kind Winston Churchill smoked.”

That very Dunhill humidor, signed by Groucho, is in this auction.

So, too, is a treasure trove of a different flavor: Groucho’s Paramount Pictures Keybook featuring 46 photographs of the Marx Brothers from Monkey Business and Horsefeathers, among them publicity stills and behind-the-scene photos. The collection, in a faded beige binder that reads “Marx Bros. Groucho Marx” on its spine, may well be one of the most historic collection of Marx Brothers photos ever assembled in a single place. It contains not only the familiar portraits of the brothers in costume but seldom-seen original prints of Harpo with Amelia Earhart on the set of Horse Feathers from 1932 and the brothers posing with members of the New York Giants and Detroit Tigers.

In this auction there are also five of Groucho’s personally owned publicity photos from his long-running quiz show You Bet Your Life; a circa-1922 portrait of Julius sans Groucho’s get-up; and two seldom-seen photos of Groucho with his family in the 1930s, along with a Christmas card they received from Charlie Chaplin.

And for those who want to keep Groucho Marx in their back pockets, here, too, is the wallet gifted to him on his 86th (and last) birthday on Oct. 2, 1976 – hence, the “GROUCHO 86” stamped on the inner right fold in gold gilt. And it doesn’t come empty, either: Contained within is his 1975 union card from the American Federation of Film and Radio Association, though Groucho loathed being part of any club that would have him as a member.