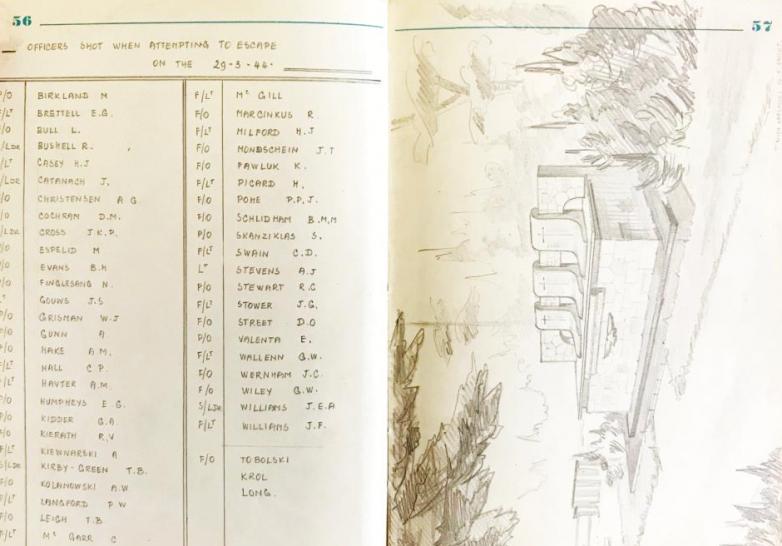 As part of a 175-piece sale, this diary belonged to Joseph Gueuffen (1914-2009), a POW held at the Luftwaffe’s Stalag Luft III camp. The Belgian-born Gueffen was shot down by the Germans three months after he joined the RAF.  He spent the remainder of the war at Stalag Luft III until being returned to England in May 1945.

Gueffen’s grey-blue, linen-covered diary, issued by the Red Cross and the international Young Men’s Christian Association, includes pencil sketches of pin-ups, a man (presumably Gueffen) in uniform, cartoons, and drawings of Block 109 where Gueffen was held. History buffs may recall that the detainees of that ward were some of the masterminds behind the “Great Escape” of March 1944, when fellow RAF POW Roger Bushell developed a plan to tunnel to freedom. Of the nearly 600 prisoners who participated in the tunneling, only 76 escaped and 73 were recaptured. One entry includes the list of the fifty men executed after attempting to escape. The 1963 film, The Great Escape, starring Steve McQueen, James Garner, and Charles Bronson, was based on the event.

The bidding starts at $3,500 and will be live-streamed at www.invaluable.com. See this and other lots, including a note from spy Mata Hari, here.