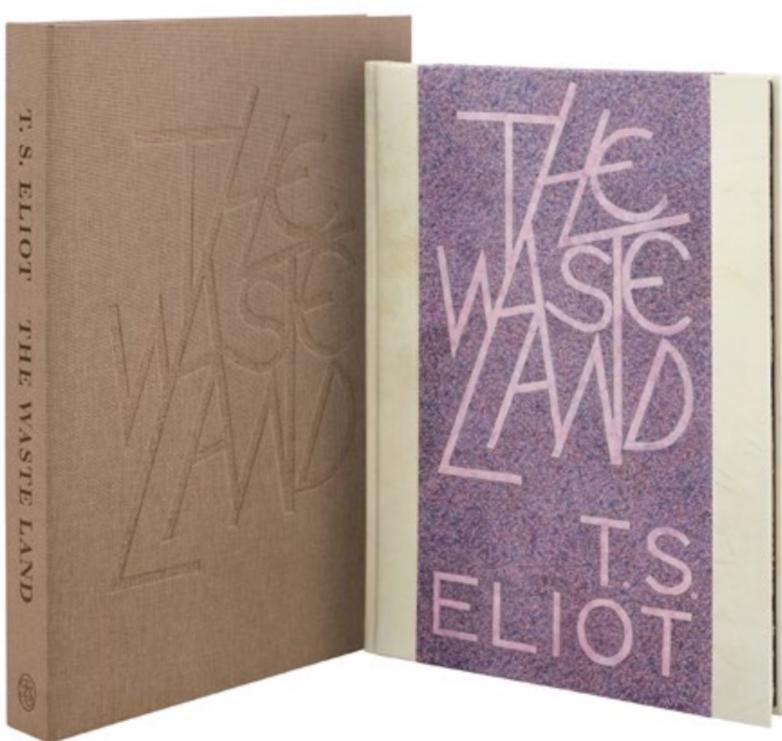 To celebrate the centenary of one of the most important poems of the 20th century, the Folio Society is publishing an edition of T. S. Eliot’s influential masterpiece The Waste Land, limited to 350 copies. Tom Phillips – elected to the prestigious Royal Academy of Arts in 1989 and one of Britain’s finest contemporary artists – contributes exclusive artwork for this spectacular edition.

Half-bound in vellum blocked in 22-carat gold and printed letterpress, each copy has been signed and numbered by the artist. For the letterpress-printed text, Folio secured mould-made Zerkall paper with each sheet cast individually – the last to
be produced anywhere in the world – with the deckle retained on two edges and gilding on the top edge. Tom Phillips RA, well-known for his ability to read within a text and peel back its layers of meaning, has contributed 11 stunning illustrations printed giclée on Tatami paper and hand-tipped onto the page, as well as ‘Notes on the Images’. He has also designed fabulous hand-drawn lettering for the title, printed on the binding and blind-blocked on the cloth-covered clamshell box. The edition is limited to just 350 copies and is only available in the US and Canada.

Consisting of five parts and Eliot’s own ‘Notes’, which explain his many cultural allusions, quotations and half-quotations, the poem has become a beacon of literature in English. Combining the Grail legend with that of the Fisher King, and mixing it all with contemporary British society, the poem alternates between prophecy and satire, and features unannounced changes in speaker, time and location to produce a vast and dissonant cultural collage.

Infused with a post-First World War sense of depression and futility, it became a rallying cry of youth against an older generation and a landmark of Modernist poetry.