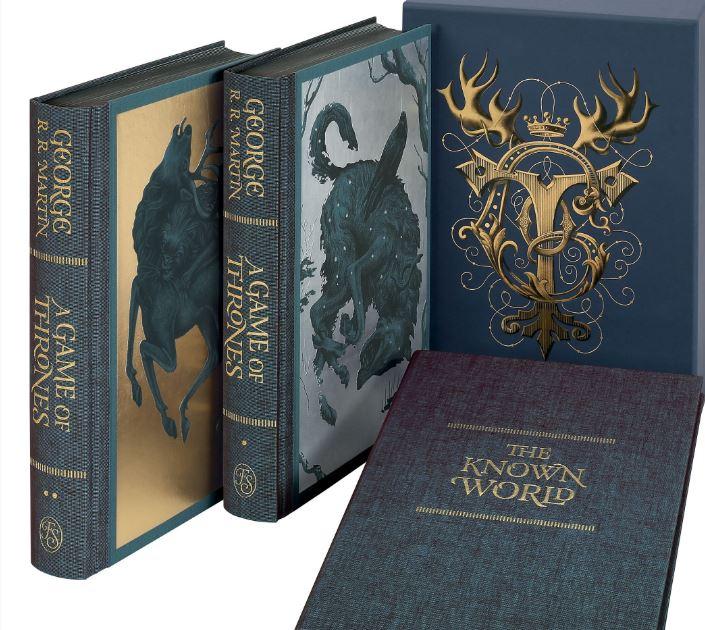 With permission from Folio Society

Illustrated edition of "A Game of Thrones."

Game of Thrones fans, this post is for you: set your sights on a new illustrated edition recently published by the Folio Society. The 824-page epic is split into two volumes overflowing with darkly sumptuous art courtesy of award-winning illustrator Jonathan Burton. (Be on the lookout for an image hidden in the slipcase design.)

“[Illustrating A Game of Thrones] became much more involved than I ever imagined with the universe of characters, costumes, settings and creatures all needing to be interpreted in an original way whilst being true to the book,” explained Burton.

“A Game of Thrones proved to me you could do something gritty, shocking and character-focused while still writing epic fantasy,” said author Joe Abercrombie, who provided the introduction to the new edition of GoT. “I’m delighted to be providing an introduction to a book that was one of my biggest inspirations.”

What does George R.R. Martin think of all this? The Folio Society team worked closely with the GoT author's team, and every element was pre-approved--no small feat considering Martin's hard at work on The Winds of Winter, the sixth in the "Fire and Ice" series.

“As a small child, I fell in love with illustrated books, when Howard Pyle and N. C. Wyeth brought Robin Hood, King Arthur, and the Men of Iron alive for me with their art,” said Martin recently. “It’s a passion that has stayed with me all my life.That's why I have taken so much pleasure in the deluxe illustrated editions of my own books. The Folio Society's splendid new editions of the Song of Ice and Fire series are masterpieces of the bookmaker's art lavishly illustrated by Jonathan Burton.  Books collectors and fantasy fans alike are going to delight in these volumes, I think. I know I will.”

Folio Society collectors may have noticed the uptick in recent years of sci-fi and fantasy publications. Part of that has to do with publisher Tom Walker’s admiration for the genre, and in this case, much of the staff had already read Martin’s books before the project began. “No wonder: the books are storytelling at its absolute best,” said Walker. “Martin has a lightness of touch with his prose which makes reading the books feel as though one is sliding along ice, at the same time as containing a richness and depth to his world, and to his characters, which many a literary author would die for.”

Don’t worry, Folio Society plans to publish all the books in the series. In the meantime, A Game of Thrones: A Collector’s Edition ($195) is available through the Folio Society’s website.