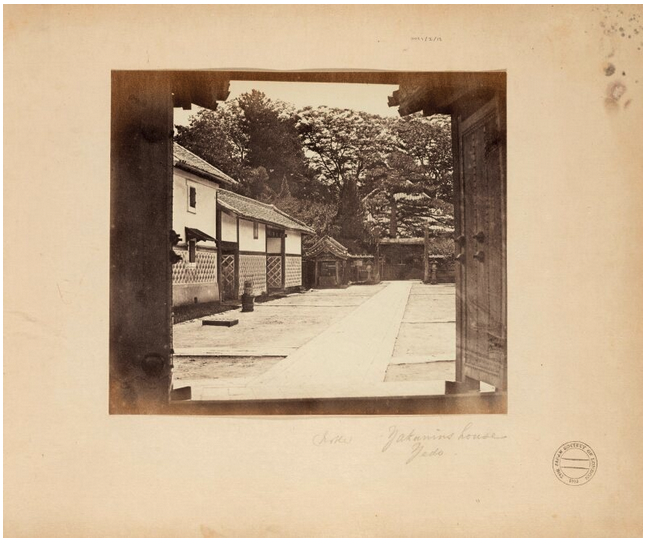 Felice Beato photograph of Japanese scenery, included in an album offered at Sotheby's London this week.

Another busy week coming up in the sale rooms:

At University Archives on Wednesday, November 2, Rare Autographs, Manuscripts & Books, in 450 lots. Expected to lead the sale is a February 20, 1777 letter signed by George Washington. The three-page letter to Brigadier General Alexander McDougall sent from Washington's winter camp at Morristown, New Jersey discusses military matters, including the importance of militia service and recent information on British troop movements; it is expected to sell for $30,000–40,000. A U.S. military sword which was displayed on JFK's catafalque in the East Room of the White House during the mourning period after his assassination is estimated at $28,000–35,000. An April 1926 Albert Einstein postcard to Dr. Hans Reichenbach on the theory of geometrization could sell for $20,000–30,000. An 1865 petition for pardon of a former Confederate soldier signed by both Lincoln and Andrew Johnson in the weeks between the inauguration and Lincoln's assassination is expected to sell for $14,000–18,000.

Chistie's Paris sells Paul Destribats: Une Bibliothèque des Avant-gardes, Partie V on Thursday and Friday, November 3–4. The 447 lots include a set of corrected proofs of André Breton's Manifeste du Surréalisme (1924), with nine autograph pages by Breton including some original collages. This lot is rated at €70,000–100,000. A deluxe copy of the 1912 catalogue De Blaue Reiter, in a special binding and with original signed woodcuts by Franz Marc and Wassily Kandinsky, is expected to sell for €30,000–50,000. Accompanying this are two letters (one from Marc to Kandinsky and one from Kandinsky to Marc).

Also on Thursday and Friday, Hindman sells American Historical Ephemera & Photography, in 634 lots. This sale includes material from the collection of Dr. James Milgram. Rating the top estimate is a copy of the December 20, 1860 Charleston Mercury Extra announcing the secession of South Carolina ($25,000–35,000). The rarest version of the reward broadsides issued after Lincoln's assassination, issued by the Common Council of Washington, D.C., is expected to sell for $20,000–30,000. This is one of just five known surviving copies of this broadside. A collection of some 116 Civil War-related documents collected by d'Orléans while writing his History of the Civil War in America is estimated at $15,000–25,000. A copy of Portfolio XVI from Edward S. Curtis' The North American Indian could sell for $12,000–18,000.