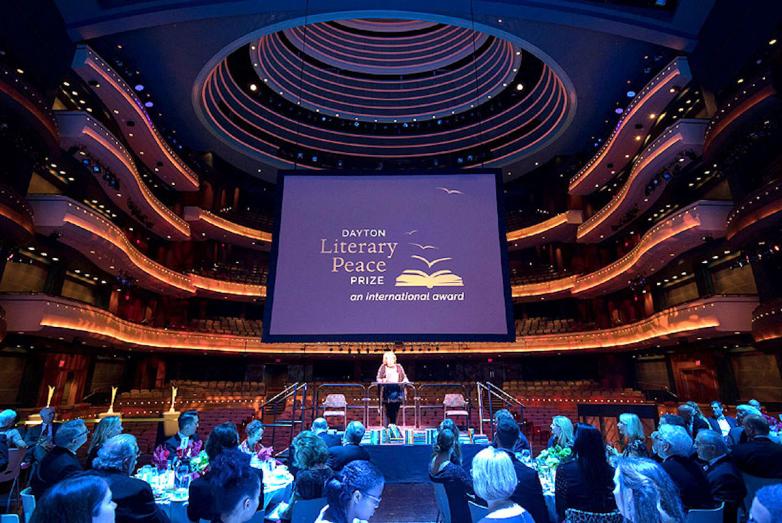 Inspired by the 1995 Dayton Peace Accords that ended the war in Bosnia, The Dayton Literary Peace Prize is the only international literary peace prize awarded in the United States. The Prize celebrates the power of literature to promote peace, social justice, and global understanding.

The full list of finalists can be found below and at www.daytonliterarypeaceprize.org.

“From the pandemic to Black Lives Matter protests to a looming election that could redefine the country, the events of 2020 have laid bare deep fault lines in America’s foundation -- economic disparity, racism, misogyny -- which are explored by many of the books on this year’s finalist list,” said Sharon Rab, Chair of the Dayton Literary Peace Prize Foundation. “But just as importantly, the books set outside the U.S. reveal how as a global power, our fault lines reach far beyond our borders. They show us how our political choices can affect individuals all over the world, and remind us at a critical moment in our history that we all have a duty to engage in deciding the direction the country will take.”

•    10 Minutes, 38 Seconds in This Strange World by Elif Shafak, Bloomsbury. The latest novel from internationally renowned writer and speaker Elif Shafak recalls the life of a murder victim during her dying moments. Born into a religiously oppressive tradition in Turkey, the protagonist escapes to Istanbul and finds beauty and light amid the darkness of the city’s sordid sex trafficking industry. Her chosen family brings her story to a buoyant and breathtaking conclusion, celebrating the power of friendship in our darkest times.

•    Lost Children Archive by Valeria Luiselli, Knopf. In this emotionally resonant, fiercely imaginative, and utterly timely novel, an artist couple set out on a road trip with their two children in the heat of summer. The bonds between them begin to fray as a larger crisis plays out on the news: thousands of kids trying to cross the southwestern border into the United States but getting detained—or lost in the desert along the way. Told from multiple points of view and blending texts, sounds, and images, Lost Children Archive is an astonishing feat of literary virtuosity.

•    The Beekeeper of Aleppo by Christy Lefteri, Ballantine. This unforgettable novel puts human faces on the Syrian war with the immigrant story of a beekeeper and his wife. When war destroys their home and kills their son, the pair set out on an epic journey to Britain, encountering chaotically crowded refugee camps, life-threatening sea crossings, and smugglers eager to exploit them. Ringing with authenticity, this beautifully crafted novel reveals the triumph of spirit when the world becomes unrecognizable.

•    The Nickel Boys by Colson Whitehead, Doubleday. In this bravura follow-up to the Pulitzer Prize and National Book Award-winning New York Times bestseller The Underground Railroad, Colson Whitehead brilliantly dramatizes another strand of American history through the story of two boys sentenced to a hellish reform school in Jim Crow-era Florida.

•    The World That We Knew by Alice Hoffman, Simon & Schuster. Set in Berlin in 1941, this sweeping novel follows three unforgettable young women -- one of them a golem sworn to protect the youngest. In a world where evil and death lurk at every turn, we meet remarkable characters who take us on a stunning journey of loss and resistance, relying on their own courage and love to survive.

•    We Cast a Shadow by Maurice Carlos Ruffin, One World/Random House. In a near-future Southern city plagued by fenced-in ghettos and police violence, a father considers taking his biracial son to a clinic where he can get his lips thinned, his skin bleached, and his nose narrowed. Evoking Ralph Ellison, Franz Kafka, and Vladimir Nabokov, this electrifying, hallucinatory novel is at once a keen satire of surviving racism in America and a profoundly moving story of a father who just wants his son to thrive in a broken world.

•    Biased: Uncovering the Hidden Prejudice That Shapes What We See, Think, and Do by Jennifer Eberhardt, Penguin. In her first book, social psychologist and MacArthur “Genius” award recipient Dr. Jennifer Eberhardt presents her groundbreaking and often shocking research and data demonstrating how our unconscious biases powerfully shape our behavior, leading to racial disparities from the classroom to the courtroom to the boardroom. Showing that all people are vulnerable to racial bias, even if they are not racist, Eberhardt reminds us that racial bias is a human problem--one that all people can play a role in solving.

•    Grace Will Lead Us Home: The Charleston Church Massacre and the Hard, Inspiring Journey to Forgiveness by Jennifer Berry Hawes, St. Martin’s Press. Pulitzer Prize-winning journalist Jennifer Berry Hawes provides a definitive account of the tragic 2015 massacre at the Mother Emanuel AME church in Charleston, South Carolina and its aftermath. With unprecedented access to the grieving families and other key figures, Hawes offers a nuanced and moving portrait of the events and emotions that emerged in the wake of the shootings, creating a unforgettable and deeply human portrait of grief, faith, and forgiveness.

•    Know My Name: A Memoir by Chanel Miller, Viking. In the wake of her sexual assault behind a dumpster on the Stanford campus in 2015, Chanel Miller was known only as a  victim. Here she shares the full story of her trauma and recovery, turning the focus from the perpetrator, where such stories are often centered, to the critical but much less common work of revealing the truth of survivors, whose suffering is so often silenced and unseen. Miller’s unflinching, emotionally honest memoir is a testament to the power of words to heal and effect change.

•    Our Man: Richard Holbrooke and the End of the American Century by George Packer, Knopf. Bestselling author George Packer, who knew Holbrooke personally, vividly relates the saga of one of the most legendary and complicated figures in recent American history, set amid the rise and fall of U.S. power from Vietnam to Afghanistan. Drawing from diaries and papers, Packer paints a portrait of personal ambition, idealism, and hubris that parallels the postwar United States.

•    Say Nothing: A True Story of Murder and Memory in Northern Ireland by Patrick Radden Keefe, Anchor. From award-winning New Yorker staff writer Patrick Radden Keefe comes a stunning, intricate narrative about a notorious killing in Northern Ireland and its devastating repercussions. Tinged with immense sadness, the book never loses sight of the humanity of even those who committed horrible acts in support of what they believed in.

•    What You Have Heard is True: A Memoir of Witness and Resistance by Carolyn Forché, Penguin Random House. Forché, one of the most gifted poets of her generation, was 27 when she was invited by a mysterious stranger to travel with him to El Salvador in the late 1970s, when the country was on the brink of war. Forty years later she recounts the experience in a devastating, lyrical, and visionary memoir of a being pursued by death squads, sheltering in safe houses, and engaging with horror in order to help others. This is the powerful story of a woman’s radical act of empathy and a poet's journey toward social consciousness.

Finalists will be reviewed by a judging panel of prominent writers including Anne Fadiman (The Spirit Catches You and You Fall Down), Hua Hsu (A Floating Chinaman: Fantasy and Failure Across the Pacific), Diane Roberts (Tribal: College Football and the Secret Heart of America), and Brando Skyhorse (The Madonnas of Echo Park).

To be eligible for the 2020 awards, English-language books had to be published or translated into English in 2019 and address the theme of peace on a variety of levels, such as between individuals, among families and communities, or between nations, religions, or ethnic groups.