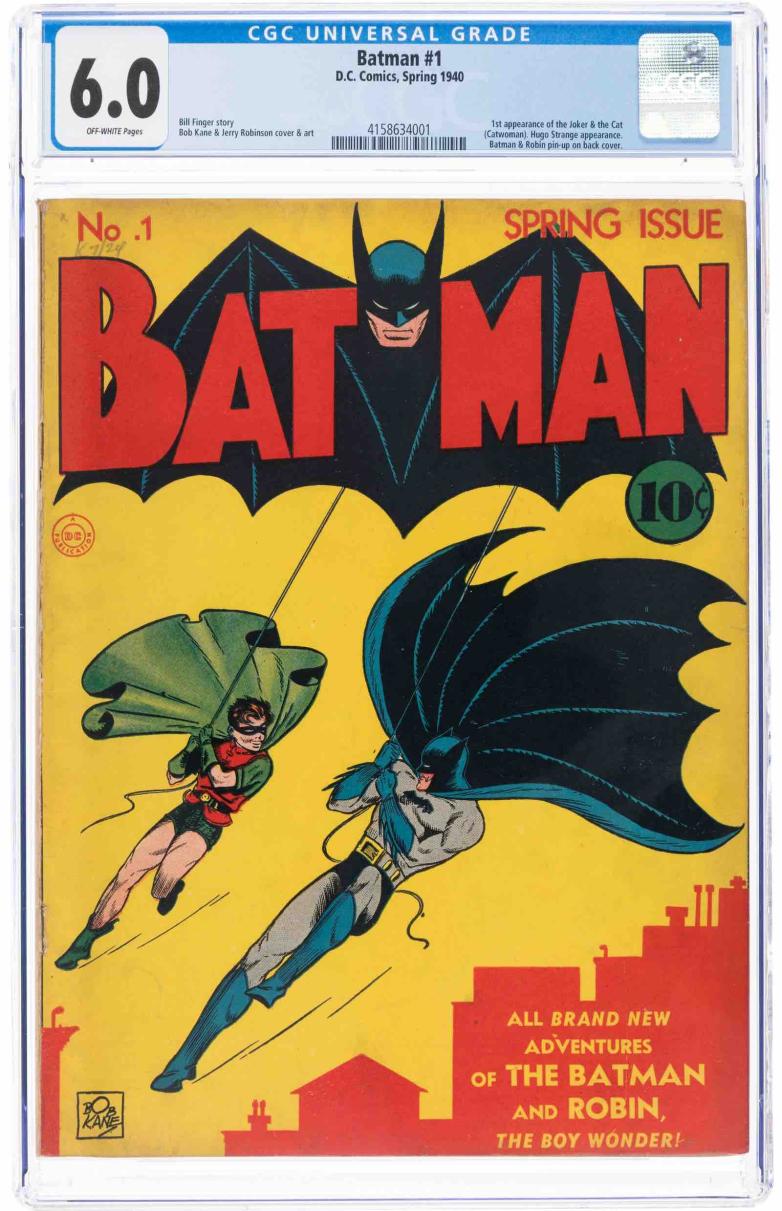 No single comic was left on the spinner rack, nor a single work of art was left hanging on the gallery wall. And by the time Heritage Auctions' completely sold-out January 12-15 Comics & Comic Art Signature® Auction ended, its final total a remarkable $13,508,641 for only 1,015 lots, numerous records were realized involving, among others, Spider-Man, the X-Men, Frank Miller's take on Wolverine, Captain Marvel, Conan the Cimmerian and Little Dot and her pal Richie Rich, the poor little rich boy himself.

"By Heritage standards, this was something of a boutique event, yet prices were fantastic across the board as evidenced by the records set for several artists and such landmark titles as Amazing Fantasy No. 15, Batman No. 1 and Whiz Comics No. 1," says Senior Vice President Ed Jaster. "No matter what happens in the outside world, it's clear the vintage comic market remains resilient, while the market for original comic art continues to exceed all expectations."

Nearly 4,700 bidders from around the world participated in this four-day event, which kicked off Thursday with a Platinum Session that exploded with a bidding war that led to a new auction record for legendary artist-creator Dave Cockrum. He was the man who helped save Marvel Comics' X-Men after readers abandoned Stan Lee and Jack Kirby's team of young evolutionary marvels in the 1970s and their books filled with reprinted stories languished on shelves and racks. 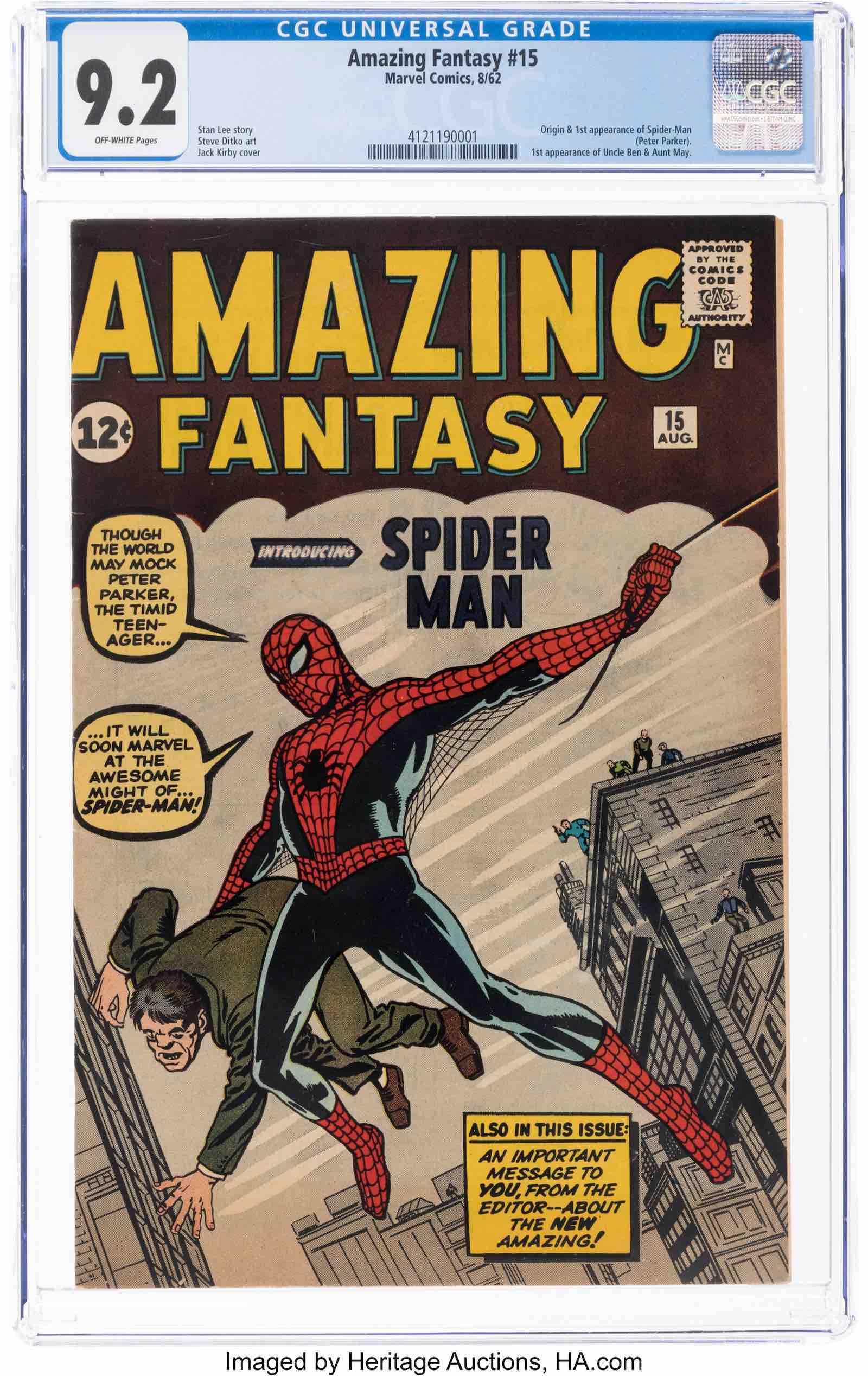 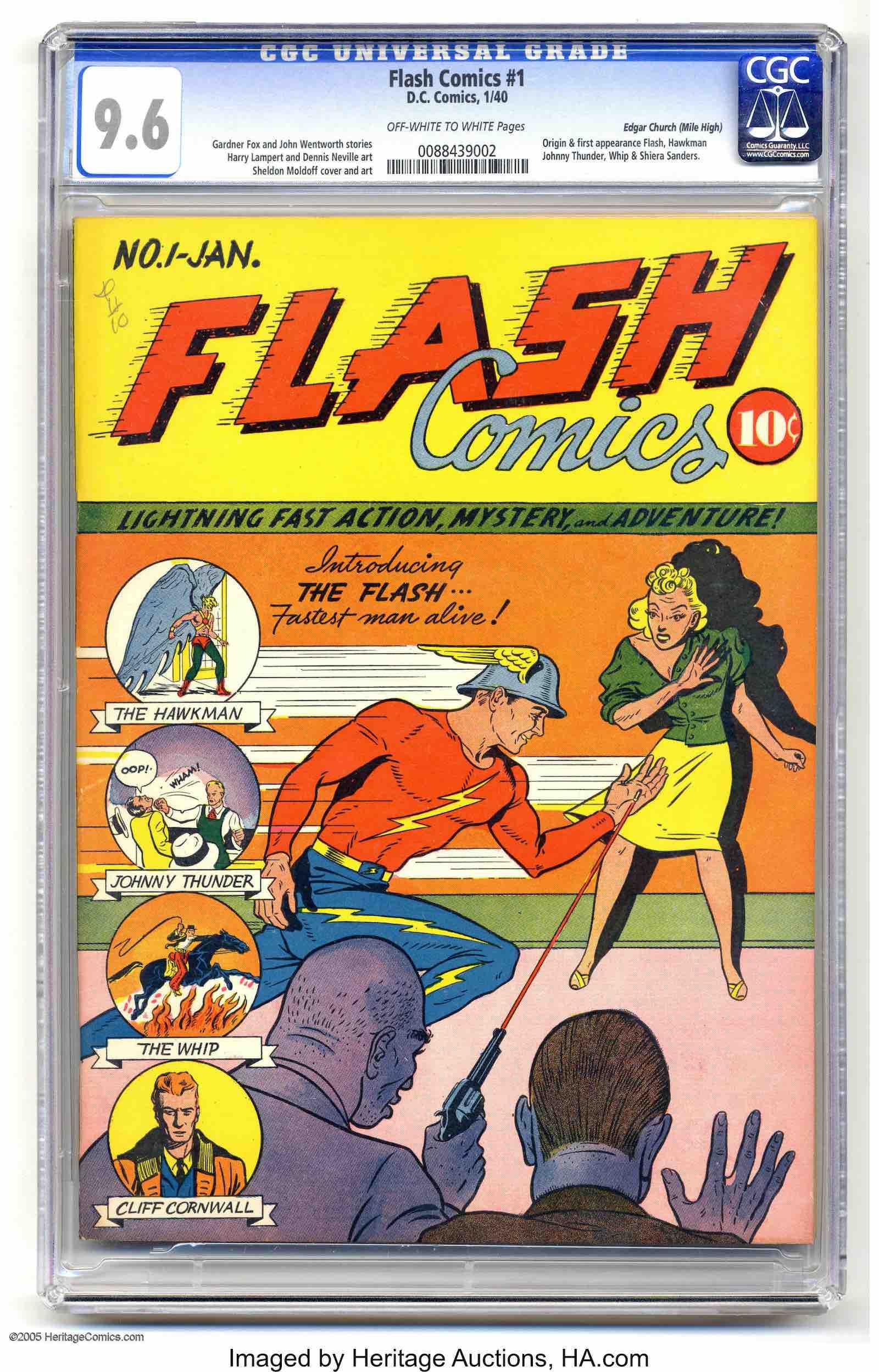 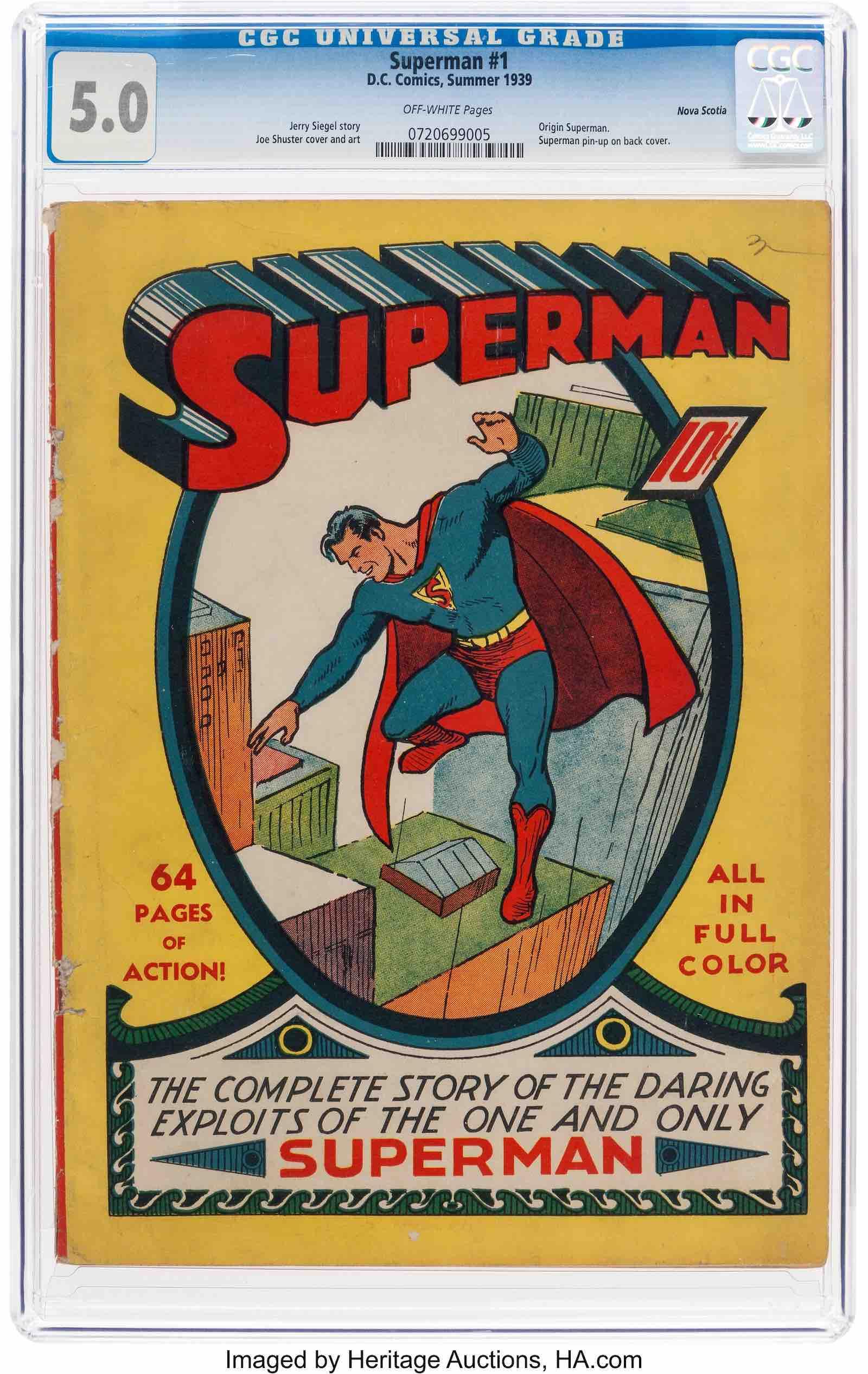 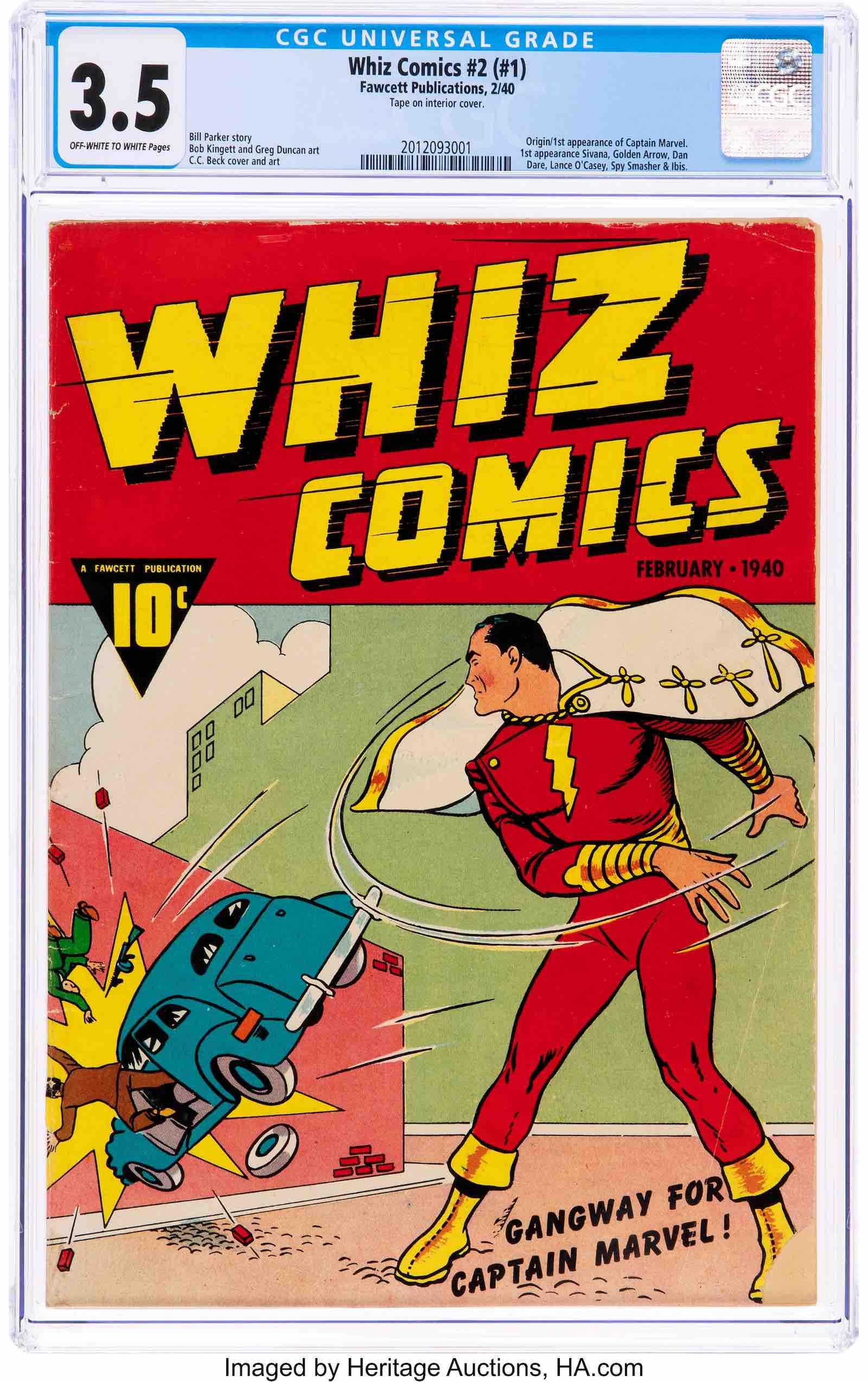 One of Cockrum's earliest covers from his legendary X-Men run with writer Chris Claremont made its auction debut Thursday: April 1976's X-Men No. 98, featuring Storm, Nightcrawler and Colossus, all Cockrum creations, and a very early cover appearance of Wolverine. The art opened live bidding at $120,000, but heated bidding drove its final price to $432,000, shattering the previous record for the beloved artist set just one year ago.

The tussle over Cockrum's gem was but a prelude to what followed. Moments later, bidders fought it out over one of the most memorable Frank Frazetta originals at auction in a while: the cover for 1973's Signet paperback Flash for Freedom! This very Frazetta piece — which renders the anti-hero Harry Flashman more cocksure cowboy than Victorian-era military hero — realized a staggering $660,000 by the time the hammer fell. This cover painting is now tied for the fifth-most valuable Frazetta piece ever sold at Heritage, which holds all of the artist's auction records.

Time and again, new records were realized: Page 17 from the second issue of Claremont, Frank Miller and Joe Rubinstein's Wolverine mini-series realized $156,000, making it Miller's most valuable rendering of the man called Logan. Writer-artist Bob Layton's original cover art for Marvel Super Heroes Secret Wars No. 7 — starring Captain America, three of the X-Men, a "new" Spider-Woman and She-Hulk, among others — sold for $132,000, setting a new auction record for a work by the famed Iron Man storyteller.

Speaking of, Page 4 from Tales of Suspense No. 39 by Don Heck — in which Tony Stark takes shrapnel to his heart — realized $132,000. And one of the earliest (and largest) X-Men covers ever offered at auction also saw plenty of action last week when the original front of The X-Men No. 26 realized $132,000. It's referred to as a "twice-up" because of its 13.25-inch by 20.25-inch size. It was also something of a mini-jam session: Jack Kirby drew the book's baddie, reincarnated Mayan god Kukulkan, while Werner Roth, Kirby's successor on the title, rendered Angel, Cyclops, Beast and Iceman.

Spider-Man's 1962 inaugural swing through Marvel Comics continues to attract collectors: A copy of Amazing Fantasy No. 15 graded CGC Near Mint- 9.2 sold for $810,000 — a new record for the grade. And, of course, several landmark titles realized remarkable numbers, including a Superman No. 1 graded CGC Very Good/Fine 5.0 that realized $675,000 and a Batman No. 1 graded CGC Fine 6.0 that sold for $552,000.

A copy of Flash Comics No. 1 graded CGC VG/FN 5.0, which opened live bidding at $70,000 and sold for $192,000 — the second-highest price realized at Heritage for that Golden Age gem behind only the legendary near-mint-plus 9.6 Mile High copy. Captain Marvel, too, was struck by lightning in this auction when a CGC Very Good- 3.5 copy of his 1940 debut in Whiz Comics No. 1 sold for $120,000. That's easily a new record for this rare and historical key, whose highest price ever realized was $173,275 for a CGC FN 6.0 four years ago. But it wasn't only superheroes setting records last weekend — or, for that matter, comic books and original art.

There was nothing little about the Little Dot No. 1 graded CGC Near Mint+ 9.6 in this auction, as this popular book among collectors — featuring the debuts of Richie Rich and his pal Dorothy Polka — led to one of the most heated bidding wars of the entire affair. The result: a new auction record of $78,000 for this Harvey Comics key.

Another debut set a new auction record last weekend: Robert E. Howard's legendary Conan the Cimmerian made his first appearance in the December 1932 issue of the pulp magazine Weird Tales. Fine copies of that historic title have long been increasing in price, but it took a significant jump in this auction, realizing $19,200. If nothing else, the timing is fortuitous for consignors and collectors: Over the next 14 months, Heritage will offer the historic Jack and Joanie Kump Collection of pulps, beginning with this month's Good Girl Art showcase. Wonder women, indeed.