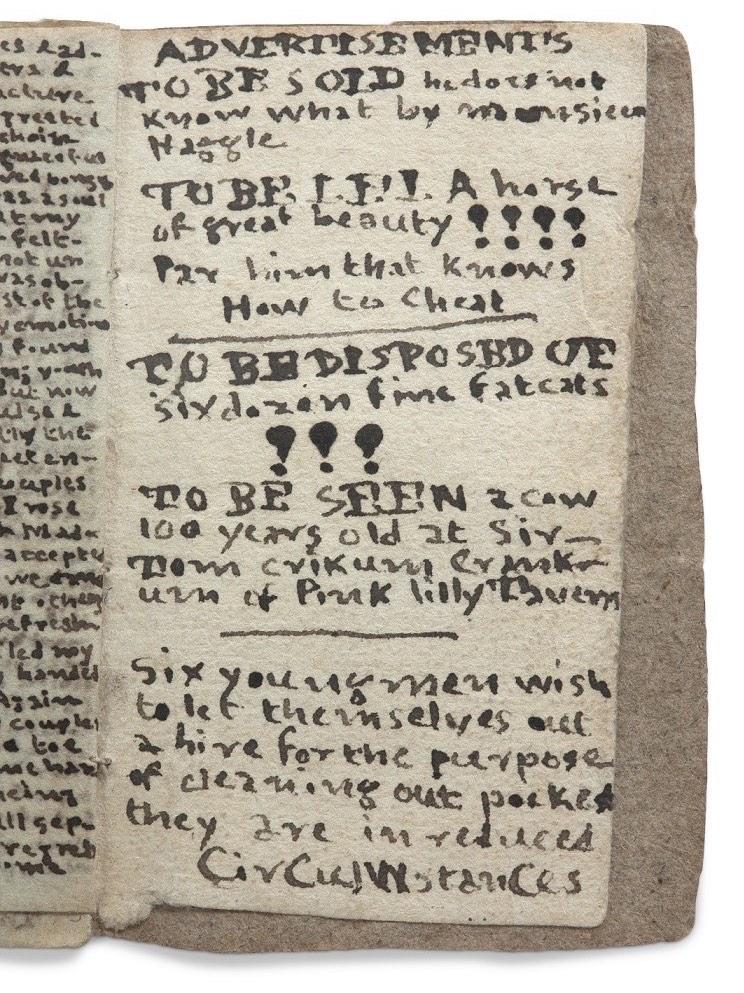 An autograph manuscript signed Charlotte Brontë, one of six 'little books' created by the Brontë siblings, will return to the Parsonage.

Haworth, West Yorkshire, England — The Brontë Society in Haworth has been successful in its bid to bring back home to where it was written one of Charlotte Brontë’s rare ‘little books’. The charity has purchased the book for €600,000 plus auction costs following a four week campaign that gathered support from across the world and the backing of many of today’s leading creative thinkers and performers.

The incredibly rare title went under the hammer at the Drouot auction house in Paris and was expected to fetch between €600,000 – 800,000. The manuscript will complete the collection already held at the Brontës’ former family home, now a museum. This is the fifth in the series of six ‘little books’ entitled ‘The Young Men’s Magazines’. Measuring just 35 x 61mm this tiny tome will join numbers 1,3,4 and 6 in the Museum’s collection; the location of number 2 has been unknown since around 1930.

The Brontë Society was able to acquire the manuscript thanks to a generous grant from the National Heritage Memorial Fund (NHMF), the UK’s fund to help save treasures from being lost forever, and support from The John R Murray Charitable Trust, The Pilgrim Trust, Friends of the National Libraries, The Aurelius Charitable Trust, R E Chadwick Charitable Trust, The Kenneth Hargreaves Trust, The Gordon Black Trust and Maggs Bros. In addition the Society raised over £85k with over 1,000 supporters through the charity’s first ever public Crowdfunder campaign.

This is the second time that The Society has attempted to return the ‘little book’ to Haworth where its journey began. In 2011, when the book was last auctioned, the Society was outbid by a now non-operational investment scheme.

Kitty Wright, Executive Director of The Brontë Society, commented: “We were determined to do everything we could to bring back this extraordinary ‘little book’ to the Brontë Parsonage Museum and now can’t quite believe that it will in fact be coming home to where it was written 189 years ago. We have been truly overwhelmed by the outpouring of support from people from all over the world backing our campaign and can’t wait to have it in place with the others and on public view to the world.”

Ann Dinsdale, Principal Curator at the Brontë Parsonage Museum, adds: “That this unique manuscript will be back in Haworth is an absolute highlight of my 30 years working at the Museum. Charlotte wrote this miniscule magazine for the toy soldiers she and her siblings played with and as we walk through the same rooms they did, it seems immensely fitting that it is coming home and we would like to say an enormous thank you to everyone who made it possible.”

The exceptional, unpublished manuscript was written by Charlotte when she was just 14 years old and features three intricately hand-written stories: ‘A letter from Lord Charles Wellesley’, ‘The Midnight Song’ and ‘Journal of a Frenchman [continued]’.  The inspirational book is also viewed as an insight into the young writer and includes a scene describing a murderer driven to madness, a theme familiar to fans of her most well-known work, ‘Jane Eyre’.

To keep updated on when the ‘little book’ will be on display, visit www.brontë.org.uk