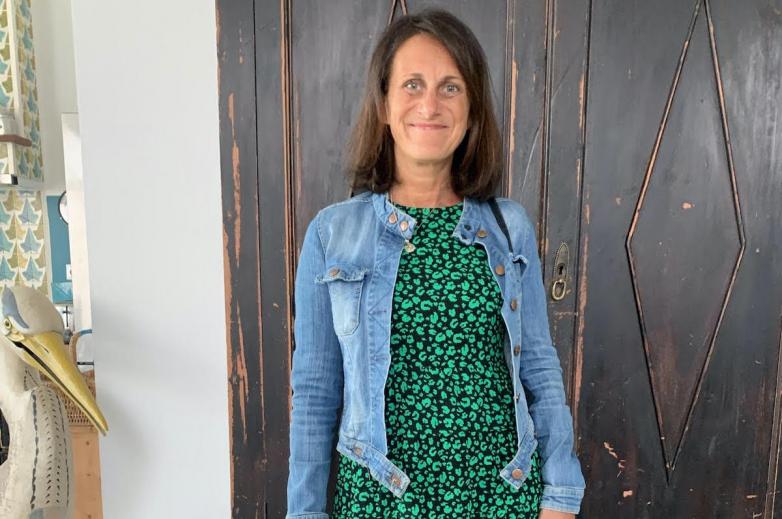 Our Bright Young Booksellers series continues today with Emma Balch of Hay-on-Wye in Wales, proprietor of The Story of Books, a former bookshop that has transitioned into an incubator for a variety of bookish projects and productions in the UK:

Please tell us about your journey into bookselling. How did you get started?

As a little girl, helping my dad set up his traveling bookshop. He had big wooden cases custom-made that would sit on a table top. I would unclip the clasps, open out the two parts -- like giant books -- and adjust the display inside to make sure covers and spines were sitting straight. As a student, I worked at Blackwell’s academic bookshop, then my first two jobs after university were in publishing. Both those jobs involved pitching titles and campaigns to buyers in bookshops, which is a key part of the ‘ecosystem’ of bookselling.

Please tell us about the shop you opened in Hay on Wye and what you specialized in:

It was called The Story of Books, located in a quirky little building in the world famous Town of Books in rural Wales. Full of character with wonky walls, wonky windows, and wonky plank floors. We sold books about books, as well as books with local connections and books related to our wider projects and storytelling. Upstairs was dedicated to books made by private presses, mostly letterpress printed.

Please tell us about the workshops and exhibitions you hosted there:

We have a collection of traditional tools and equipment for papermaking and printing, so we installed some of the smaller items in the shop and ran small scale workshops e.g. making vegetable papyrus and learning about the development of papermaking.

We had a beautiful exhibition in collaboration with The Folio Society, which followed the making of a special edition of the poems of Edward Thomas with original illustrations by David Gentleman. We displayed the progressives from the printing of the illustrations, plus samples and dummy copies of the books and slipcases, tools and samples for the production -- foil blocks, end paper samples, part bound copies and so on.

We hosted several ‘wayzgoose’ events in the area, with our friends in the letterpress printing community. Some exciting collaborations have come out of these events. Unfortunately, we had to cancel our final wayzgoose in the shop as it coincided with the start of the first Covid lockdown in Wales. We hope to organize another Hay Wayzgoose next year.

I love making connections and the book trade is the ultimate way to make connections -- to other cultures, to characters, to communities, to moments in time. It is possible to connect to the book trade on many levels -- whether your interest is in book production, or stories, a genre, a theme, or a place. Take a look at the booksellers in Hay-on-Wye and you have an eclectic collection of characters who love what they do. They are also serious experts in their trade, but quite low key in terms of plugging away day after day buying, organizing, and selling. Hundreds of thousands of books in a tiny town, with booksellers with a depth of knowledge and breadth of experience that could easily land them a job as curator in some of the top libraries in the world.

The Story of Books produced a play -- Unicorns, Almost -- by Welsh playwright (and novelist, poet, and screenwriter) Owen Sheers. This one-man show was about the life and work of Keith Douglas, the finest poet of WW2 who was killed three days after D-Day. As well as live productions at the Hay Festival, Edinburgh Fringe, Bristol Old Vic, and in Normandy (France), our production was broadcast on BBC Radio 3. A bookseller in Bristol, John Sidwell of Dreadnought Books, read about the production and contacted me. He had bought a collection of books including poetry and biography of Keith Douglas. Inside these early editions, he had found a letter penned by Keith Douglas during WW2. Having immersed myself in the world of Keith Douglas for a couple of years, it was very special to handle a letter, written in his beautiful ink script from his camp in the Western Desert, with the old stamp. The books also included drawings and paintings by Keith Douglas that I had not seen before, even in his archives at the Brotherton Library Special Collections at Leeds University.

After the closure of the shop, we understand you were all set to open a book museum. Could you tell us about that?

Actually it was the other way around! Our plan was to open a working museum of books and after six years of developing that project, it was gutting that our joint venture with the venue fell through. On the back of this, we rented the shop so we could have a presence on the high-street in Hay-on-Wye. In the end, the space was too limited to encompass my original vision but we had two wonderful years there. We are still looking for an alternative venue to create a dynamic museum of books “where stories are told and books are made.”

Please tell us about your umbrella project The Story of Books and all the interesting efforts embedded there:

As part of the research and development for the museum, we ran several pilot projects. Although we were unable to establish the museum, we have been able to run with some of these projects. Some of the highlights for me have been Story Power, Hay Cartoneras, #NoWords and Blind Bookworms (click on the links to see photos and read more). In all we do at The Story of Books, we aim to tell powerful stories in creative ways to unexpected audiences. The final part is a recognition of our approach of thinking first of those on the fringes, who might feel a project is not for them or who feel excluded. Our priority is to find a way to include them.

I am a supporter of a project in Porto called ‘Salut au Monde’ (after the Walt Whitman poem). Through this I began collecting contemporary photography books that celebrate diversity and alterity. Two of my favorites are The Dew of Little Things by Carlos Lobo (Editions Loco) and The Jungle Book by Yann Gross (Actes Sud). Each has a special resonance for me. In the first case, my grandmother grew up in Beirut (after moving from Aleppo, where she was born as an Armenian refugee). In the second, I spent three months in the Amazonian city of Manaus earlier this year as my husband, who is a journalist and writer, is working on a book about the region.

I also collect secondhand books with interesting pink covers! I love spending a lazy afternoon in the bookshops of Hay-on-Wye looking for pink books that catch my attention. The fun thing about focusing on a color is the books can be from any genre and can be a cheap paperback or a delightful first edition. I also have a large number of books with yellow covers…

I love going on slightly crazy adventures with my two sons. We are trying to cycle the entire coastline of Portugal in stages. So far, we have cycled from Valença in the far north down to Figueira da Foz. We cycle between 50 and 100km per day. We pack swimsuits, a picnic, books, and our roll-up backgammon set, and enjoy the beaches along the way. On the next stretch, we will stop in Óbidos, the small Portuguese book village. This summer, we were in Paris for a month and one Saturday I cycled around the perimeter of the city, along the boulevards inside the famous Peripherique. I enjoy challenges like that, with a clear start and finish. I also write for two hours each morning. With a couple of strong black espressos, this is pure escapism for me. I sit, sip, and immerse myself in an invented world.

What other projects are coming down the pipeline for you?

For now, with Covid restrictions making live events challenging, we are working on audio projects. BBC Radio 3 have commissioned a new radio play from us, which is very exciting. ‘Pessoa-Pessoa’ will be written by Owen Sheers and we will be working with the same team (as Unicorns, Almost) for this new drama about the life and work of the most famous Portuguese poet, Fernando Pessoa. He is interesting because he wrote under many (150+) names. He called them ‘heteronyms’ and created whole worlds and characters for them.

Other projects we are working on include a podcast series and a community project to build a wooden rolling press based on the designs published in 1769 in Diderot and D’Alembert’s Encyclopédie.