Our Bright Young Librarians series continues today with Henry Widener of the Oliveira Lima Library at the Catholic University of America in Washington DC. 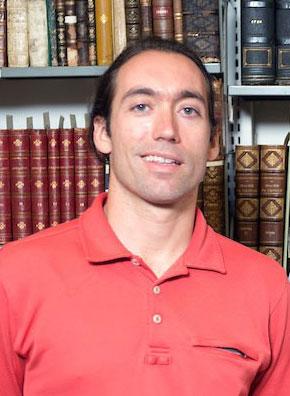 I am the Library and Archives Assistant in the Oliveira Lima Library at the Catholic University of America. The collection spans from the 16th to the 20th century and includes books, manuscripts, musical scores, artwork, scrapbooks and the Oliveira Lima Family Papers, the personal archives of Brazilian diplomat, journalist and historian Manoel de Oliveira Lima and his wife Flora (née Cavalcanti de Albuquerque), a member of one of Brazil's most traditional landed aristocratic families.

Of the library's estimated 60,000 items, only about a third have been cataloged. Thus, a good part of my job involves the nitty-gritty of description and access, be it through cataloging or archival arrangement and description. Another important job of ours is expanding our reach both within our own university community as well as to other special collections libraries and research institutions throughout the world. The Oliveira Lima Library is most often characterized as one of the world's foremost sources for Luso-Brazilian history and culture. While this is certainly true, the library's director, Dr. Nathalia Henrich, and I find that this tends to limit the scope of the collection. We have thus made efforts to alert people to the socio-historical intersections present in our collection. As any student of the history of the Americas knows, Europe's colonial projects (whose legacy is still very much with us today) involved a kind of complex and never-ending process of negotiation in which borders were constantly drawn and redrawn between nations, races, ethnicities, and so many other categorizations. Beyond that, the Oliveira Lima Library houses the personal papers of its namesake, himself intensely involved in these struggles for power to which our documented memory bears witness. Thus, rather than a collection dedicated to and limited by the personality of this one person, we often present the Oliveira Lima Library's holdings as as much of a gateway to the Modern world as they are a universe unto themself.

I was in the middle of earning my bachelor's degree in History from the University of Texas at Austin and starting to wonder where my postgraduate studies might take me when I was hired for an internship at the Archives and Records Division of the Texas General Land Office. From that point on I knew that librarianship was the best way for me to indulge in my passion for history while still maintaining a commitment to making information available to all who seek it.

During my last semester at UT, I had started to look at LIS programs around the country when, out of nowhere, I fell in love with an exchange student from Brazil. Next thing I know I've got a one way ticket to Recife, Pernambuco, Brazil and my library degree has been set on the back burner. A couple years and a working knowledge of Portuguese later, I met Professor Marcos Galindo, who encouraged me to apply to the master's program in Information Science at the Universidade Federal de Pernambuco. Under the advisorship of Professor Galindo and Dr. Nathalia Henrich, I wrote my master's thesis on the scrapbook collection at the Oliveira Lima Library entitled Vontade de Memória: Manoel de Oliveira Lima nos Estados Unidos, 1912-1928.

Not long after that, Dr. Henrich had become the director of the Oliveira Lima Library and asked if I’d be interested in applying for the newly-opened position of librarian. I have to say it has been a happy convergence of hard work and good luck for which I am eminently grateful.

Without a doubt, it would have to be Peregrinaçam de Fernam Mendes Pinto, printed by the Flemish printer Pedro Craesbeeck in Lisbon in 1614. The first chapter is one of my favorite passages of prose in any language, a mix of lamentation for the ills which have befallen the author throughout his entire life (he was imprisoned and/or enslaved more than 20 times during his travels throughout Asia) and awe at God's mercy and wisdom for allowing him to survive such tribulations long enough to tell his children. The presswork and binding of Oliveira Lima's copy is also delightful.

In terms of books I've got a budding Texana collection which I'd like to continue growing. Nothing particularly rare, just the classics like John Graves, Roy Bedicheck and Billy Lee Brammer. My wife and I also collect vinyl, most prominently Brazilian artists like Maria Bethânia, Os Tincoãs, Tim Maia and Luiz Gonzaga. Come to think of it, both of these collections sort of act as a means for us to maintain contact with places currently distant but always so close to our hearts.

I love riding my bike or walking through all the wonderful parks around my neighborhood. I always bring my binoculars with me to do some casual birdwatching (maybe collecting in a different form?). I also play the electric bass.

I am passionately committed to the social responsibility of all types of librarianship. In the realm of special collections this means that documents should be understood as part of our shared store of memory. Rather than the dominion of academics at the pinnacle of higher education, special collections materials belong to all wishing to learn more about the world around them.

I think the history of the book and provenance studies are two fields which can underscore the unique history of every library's materials. To look at documents as artifacts also places emphasis on how the spread of information is conditioned by historical circumstances such as social relations and technological capabilities, something which I believe to be of absolute necessity in the digital age. The Oliveira Lima Library’s bibliographic holdings have a particularly rich provenance which has much to contribute to this field.

The scrapbook collection at the Oliveira Lima Library holds a special place in my heart. It is fascinating to see how someone so focused on his legacy would reconstruct their life through letters, newspaper clippings, photographs, playbills and other ephemera.

The correspondence section of the Oliveira Lima Family Papers is also quite striking for the diversity and breadth of its cast of characters. It is most well-known for its laundry list of the giants of Brazilian politics and letters who were Manoel de Oliveira Lima’s contemporaries, including Gilberto Freyre, Euclides da Cunha, Machado de Assis, Lima Barreto, José Veríssimo, Joaquim Nabuco, Ruy Barbosa, Barão do Rio Branco, just to name a few. Beyond Brazil, the correspondence collection offers so much to those interested in global politics and intellectual life of the turn of the 20th century. Of interest to those of us in the field of library science, Oliveira Lima even corresponded with Paul Otlet!

The Oliveira Lima Library puts on an exhibition every September in honor of Brazilian Independence. Last year we coupled our exhibition with a book launch of a new edition of Manoel de Oliveira Lima’s The evolution of Brazil compared with that of Spanish and Anglo-Saxon America (1912). Our exhibition highlighted Manoel de Oliveira Lima’s life as an intellectual in the United States, first as a visiting scholar at Stanford, then as a professor at Harvard University and later as a professor of International Law at the Catholic University of America. COVID-19 seems to have put a damper on hosting a physical exhibition in 2020, but we are exploring platforms that would allow us to host something virtually.