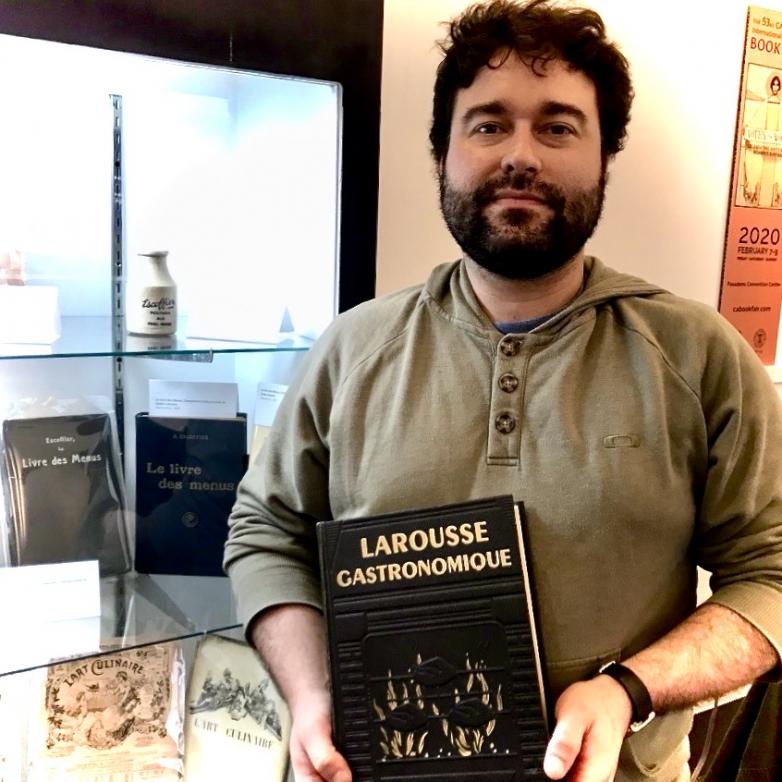 I grew up in Oakland, but I’m a French citizen. I took advantage of my passport and spent much of my twenties studying and working in Rome, Paris, and Helsinki. I just turned 30 and feel like it’s time for me to settle in Oakland: it’s home and it’s where I keep all my books.

I studied political science and French literature in college. Cured of academia, I eventually wound up in Paris for culinary school at Le Cordon Bleu. I’m now a professional cook and an unprofessional (joke intended) book collector.

My entire collection is pretty diverse. There are so many things that catch my fascination! With limited success, I do try to limit myself to mostly cookbooks. I’m particularly devoted to collecting the ones related to the places I learned to cook: California and France. I’m especially interested in French cookbooks from the 19th- to the mid-20th century.

I lost count years ago, but I have over 200 books on French cuisine alone.

I’ve been buying books since I learned to read. By the fifth grade, I had completed my collection of Tom Swift Jr. books (all 33, and this was before I knew how to buy them online!). The first rare French cookbook I bought in Paris from a Bouquiniste (one of the booksellers that have permanent stands along the Seine). It was a first edition of the Larousse Gastronomique. Doing a little haggling there is a given, so I pretended to be offended by how expensive it was, and moved on to the next bookseller. To my delight, he followed me with a much more reasonable offer, which suggested that even further negotiation of price was in order.

I just bought a signed first edition of Death of a Salesman. My most recent cookbook find is an unusual little promotional pamphlet of milk recipes by Auguste Escoffier. I haven’t been able to find any trace of its existence anywhere. It’s a ghost and I’m delighted to have discovered it!

Le Guide Culinaire is Auguste Escoffier’s magnum opus. It is the single most influential tome ever written on French cuisine. This isn’t really debatable. What is subject to debate, though, is the originality of the information within it. Escoffier never made it a secret that he was indebted to his predecessors, and this book was his attempt to cohesively assemble and streamline all their knowledge and to add a few innovations of his own (Peaches Melba, for example!). Also debated, is how much of the authorship was Escoffier’s alone: many have suggested that he, known for his humility, was generous for crediting his coauthors as such. Perhaps it would have been more appropriate to list them merely as contributors.

Anyway, I once came across a first edition of Le Guide Culinaire that he had signed. Translated, the inscription, read: To my very dear friend and devoted collaborator E. Fétu. In recognition of my eternal gratitude. While anything signed by Escoffier is prized, this note to his coauthor was astounding because it very much suggested that he felt Émile Fétu had been a major contributor—a worthy coauthor—to the book. This was the Holy Grail.

Well I bought that copy of Le Guide Culinaire. As a book collector, I have the rare privilege of having found and acquired the Holy Grail. There is nothing out there that I could find more desirable, unless one of your readers knows where I can find the book’s original manuscript…

Salvador Dalí’s cookbook, Les dîners de Gala, signed, and, according to the colophon, specially printed, leather-bound and slipcased for Max Gérard, who helped him write it and was a collaborator in many of his other books. There is no mention of other similar special editions, so I suspect mine is unique. The bookseller didn’t speak French, and didn’t seem aware of what was indicated in the colophon. I think he also assumed that Dalí’s signature was printed and not original.

So far, none of them have gotten away!

Omnivore Books on Food in San Francisco, owned by Celia Sack, whose enthusiasm for cookbooks is dangerously contagious.

Unfortunately, I have other collections. Aside from a budding collection of original menus written by Escoffier and his colleagues, I have a pretty large collection of old cast iron and copper and numerous other kinds of old cookware and cooking appliances.