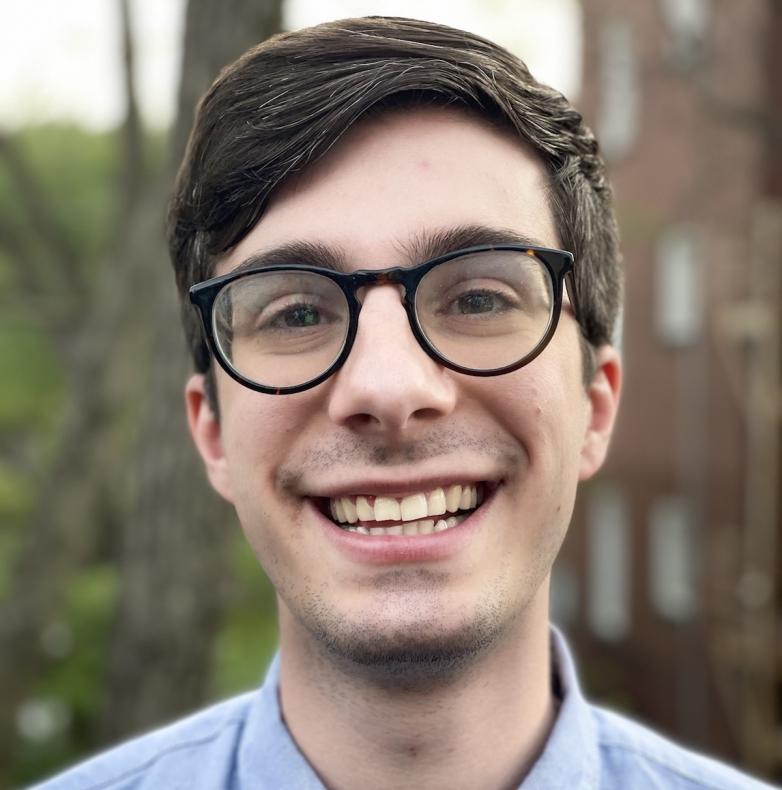 Our Bright Young Collectors series continues today with Jack Swab of the University of Kentucky, who won second place in the 2020 National Collegiate Book Collecting Contest.

I was born in Massachusetts but raised in Maryland with a short stint in New York. I’ve spent my adulthood living in Pennsylvania, Oklahoma, and for the past three years in Lexington, Kentucky.

I’m currently working on my PhD in Geography and my Master of Science in Library Science at the University of Kentucky. In terms of research, I focus on the ways in which geographic information is managed and utilized by companies and individuals. Specifically, my planned dissertation will examine the formation of the ZIP code system and its impact on how Americans understand local space.

My main collection areas are in LGBTQ travel guides, ephemera related to the production of maps, and maps of Pennsylvania. The emphasis on cartography comes from my time as an undergraduate at Penn State where I worked in the map library and came to realize the uneven collecting landscape of post-1850s maps. While there I worked extensively with their collection of Sanborn Fire Insurance Maps, which led me to become more interested in learning more about the production of maps. Most map collections typically house the final cartographic products themselves and not the information about the individuals and companies that made them. My collection in this area seeks to document the stories of maps and their production.

My collection of queer travel guides arose out of a Queer Geography class I took in graduate school. Queer history is very much a work in progress and collecting these guides has helped me to better understand the role of geographic information in the formation of the queer community. Given the historically “taboo” nature of these items, they were not collected by any non-queer institution in a systematic fashion, thus there is room for a collection in this area. All of my collections focus around finding and preserving these items to better illuminate the systems that produced them and their impact on the world.

According to my most recent listing, I’m currently hovering at around 500 different items. I estimate that three-quarters of these are maps, while the remaining quarter are textual items such as queer travel guides.

The first queer map I bought was the Winter/Spring 1985 Official Gay Guide Map of Manhattan produced by David James Press. These maps were issued several times a year for cities across the United States and Canada and were designed to provide more updated information than an annual guide could.

The 1990/91 Gaia’s Guide International, one of the final editions of a British-based lesbian travel guide.

That’s a tough call—the one that has the best story is a 1974 guide entitled Which Way Do You Go? In addition to the guide, it came with a business card for the author, a signed (but completely blurry) photo of the author, and a small booklet with updates for 1976.

To make a long story short, I was able to discover the authors real name and from this use a variety of sources to piece together his life story. He was a remarkable character—he seems to have been born and raised in quite adverse conditions, became a high school speech and debate champion, won a scholarship to study at Syracuse University and in the process studied abroad in Mexico City for a year. He then seems to have moved to San Francisco to work as a high-end international tour guide leader, which allowed him to travel the world and thus compile this guide. To illustrate how widely he traveled, in 1976 alone he visited at a minimum 19 countries on all continents except Antarctica. It’s really an item that shows the personal story behind these items and their creation.

That’s easy: For Your Convenience by Paul Pry. Published in 1937 by Routledge, the book is a thinly veiled discussion of homosexuality and “cottaging” (the British slang word for the practice of having queer sexual encounters in public). It comes complete with decorative maps of London on both the front and end papers depicting various public restrooms in the city where “relief” might be found.

Either Routledge caught onto the books undertone or it did not sell well, meaning that few copies are in circulation. In recent years this book has sold for four-figures from well-known dealers; I bought mine for $20 from a corporate used bookseller on eBay who obviously didn’t know what they had!

Very early in collecting queer travel guides, I received an email alert from a bookseller offering up a pre-Stonewall travel guide. Not knowing the market well, I hesitated and by the time I decided that it might be worth purchasing (less than an hour later), it was gone.

There are others I’m sure, but I’ve pushed them out of the recesses of my mind so I can try to get some sleep at night!

If we are talking about objects that likely don’t exist, but make for good fantasy, I would be over the moon to find a queer travel guide paired with a travel diary that details the exploits and adventures of a queer individual from the pre-AIDS era. Being able to read between the two documents and see the worlds that were co-produced would be amazing.

A more realistic, but equally improbable find would be an original “copy” of one of the underground mimeographed or typewritten lists of gay bars from the 1940s and 1950s. Facsimiles such as the Swasarnt Nerf's Gay Guides for 1949 exist, but the original would obviously be better.

Hands down Bolerium Books in San Francisco. They consistently have the best materials at the best prices. Hard to beat that!

Dust—I would have to be dead to not collect books.