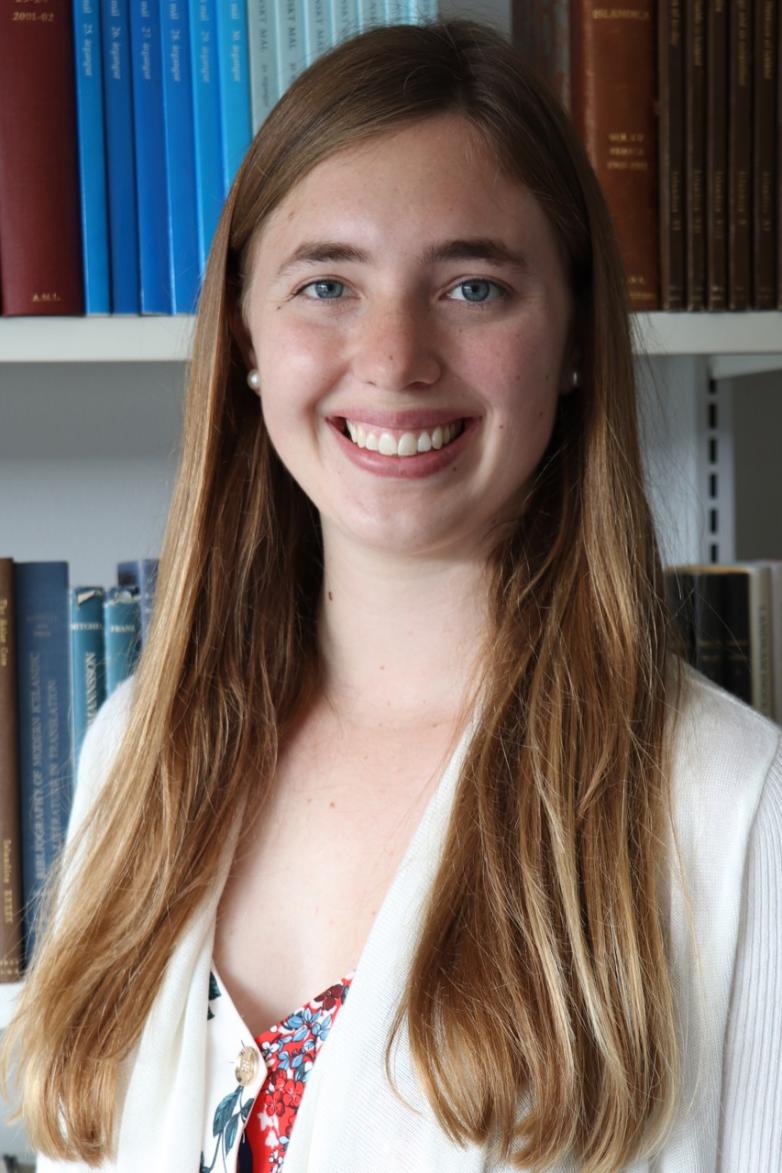 Our Bright Young Collectors series continues today with Arendse Lund, an honorable mention in this year's Honey and Wax Book Collecting Prize, for women 30 and under.

I’ve lived most of my life in California, though I moved to London for my Masters and PhD!

I majored in English and Medieval Studies at UC Berkeley. There I took a class that introduced me to the special collections in Bancroft Library and I absolutely fell in love with the medieval manuscripts. This led me to pursue a Masters in Medieval and Renaissance Studies at University College London, followed by a PhD in English, focusing on the connections between medieval law and literature. As part of that, I was a visiting researcher at Lambeth Palace Library in London where I curated “Writing the Law,” an exhibition featuring Lambeth’s legal manuscript collection.

I collect editions of the sagas, in either Scandinavian languages or English translation. For me it is fascinating to see how the purposes of these editions changed over time. Before Icelandic sagas were published in any great numbers, the old Icelandic and Norwegian manuscripts were used by Scandinavian historians to write the history of Scandinavia as learned works, most often in Latin, with little historical criticism, mixing fantastical tales with historical annals. These works had a surprising long afterlife and were only truly superseded when critical editions of the original texts were published. As time went on, translations became educational tools for the masses. Latin translations disappeared in popular editions, the original Old Norse text was no longer printed, and the translation itself was written in the vernacular.

My collection consists of mono- and bilingual editions. Individually they are smattered through libraries, but the real value lies in having them all in one place to cross-reference and compare how changing views of editions and sagas ties into history and nationalism. Initially I was surprised at how much translations into the same language could vary from edition to edition. However, as the aims of the translators — or those funding them — changed, so did the edition at hand.

Somewhere around 50 books. Most are translations of the sagas into various languages. However, I also have a small collection of illustrated accounts of travel to Iceland and art books where the saga texts are secondary to the art work.

Probably a Penguin Classic version of one of the sagas! I had the experience I think a lot of people do: I was collecting before I realized I was collecting. Initially, the books I collected covered many topics, purchased impulsively for a great binding or an eye-catching dust jacket. Then, as I started to be more selective, I couldn’t understand why the same saga could have such drastically different translations. That really piqued my interest.

I recently acquired Eigil Knuth’s edition of Âlut Kangermio: K’avdlunâtsianik (Aron from Kangek’: The Norsemen and the Skraelings). The backstory is what caught my attention. In 1858, Aron, a hunter in Southwestern Greenland, contracted tuberculosis and, while he was confined to bed, he collected the oral stories passed down in Greenland concerning the vikings. Aron eventually succumbed to tuberculosis, and 100 years later, Eigil Knuth published the stories the hunter had collated and illustrated. It’s a trilingual edition and the only one in my collection that contains English, Danish, and Greenlandic.

I’m going to cheat and pick two favorite books because they go together. The first is N.F.S. Grundtvig’s Bjowulfs Drape: Et gothisk helte-digt fra forrige aar-tusinde (Beowulf’s Epic: A gothic heroic poem from the last millenium). This is the first translation of Beowulf into any modern language and is only preceded by Thorkelin’s terrible 1815 edition and translation into Latin. In this 1820 edition, Grundtvig uses and corrects Thorkelin’s translation and produces a modern Danish edition of the poem. However, this isn’t a typical translation and is instead based on Grundtvig’s national romantic mindset, causing critics to fault it. This leads me to my second book, which is Grundtvig’s 1865 edition of Bjovulus-Drapen: Et Høinordisk Heltedigt Fra Auguls-Tungen (Beowulf’s Epic: An Old Norse heroic poem from the old tongue). After the criticisms Grundtvig received from his first edition, he went back and retranslated the poem. So while this is understood as the second edition of his Beowulf translation, it might be more accurate to say that this is the first edition of his re-translation and issuance of the story. In the 45 years between his two editions, an Old English dictionary had been published, and he used that to correct his first translation and publish his second version in Danish.

My favorite surprise was finding a first-edition copy of Gisli Saga illustrated by the American painter and printmaker Rockwell Kent for only $30! There are these incredible, dramatic black-and-white chapter headpieces throughout. He illustrated both Gisli Saga and Beowulf in the 1930s.

I had an opportunity to purchase Rockwell Kent’s illustration of Beowulf (1932) but I wasn’t quite fast enough and the edition got snapped up by a library in Denmark!

That would probably be H. Peder Claussøn’s 1633 edition of Norske Kongers Chronica. It’s the first translation of Snorri Sturluson’s Heimskringla, making it unfortunately (at least from my point of view) very rare and expensive. On the other hand, what happens if you achieve your Holy Grail? Then I suppose I’d need to find something else to yearn after.

I absolutely love the Book Barn in Niantic, Ct. You never know what you’ll find in there and the stores are all sorted by genre. Plus, there are all the book store cats who are always willing to say hello! But I love walking into antiquarian bookstores; there is always the feeling that you will stumble over the next great find, the palimpsest, the lost Reformation print banished and burned by the Church, or your favorite childhood book long lost!

That would probably be propaganda posters. They’re incredibly fascinating for the way they direct public opinion. The images of Uncle Sam pointing and saying “I Want You For U.S. Army” or the strong female war production worker saying “We Can Do It!” are still pervasive in American society many decades after their creation. Even if I don’t describe what they look like, the slogan alone is likely enough to have their images spring to mind. Propaganda is a powerful tool.