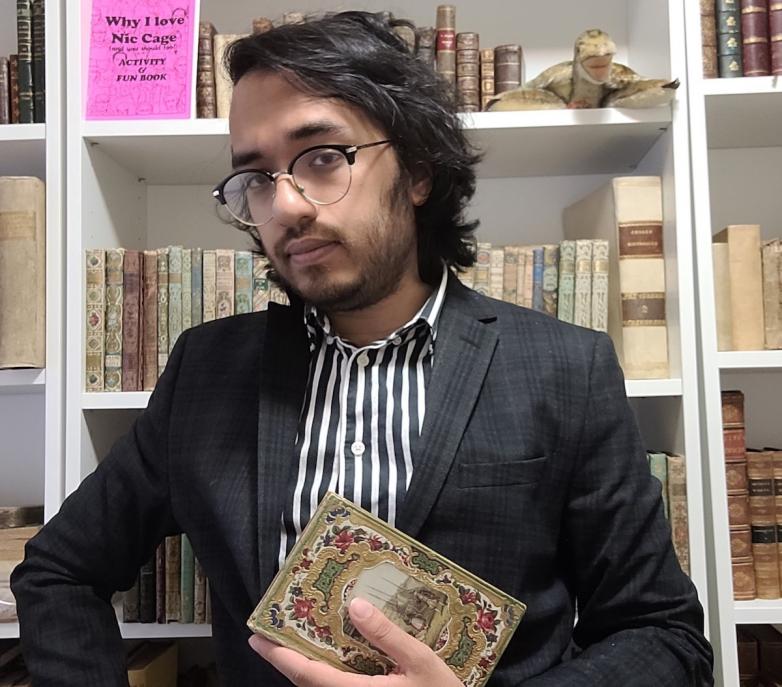 Our Bright Young Booksellers series continues today with Zubairul Islam, proprietor of The Guy with the Books in Toronto, Canada:

Mostly a string of lucky breaks and accidents in the last few years. Although I did have a love for books from a young age, my original ambition in any career involving books was to become a rare book librarian, which I later realized was not quite so likely to happen given my path of study. It all started shortly after graduation in 2017, where I was largely jobless and regretting my decision to spend 4 years for a mostly pointless business degree. In the six-month gap before I found full-time work, I decided to start collecting books for myself a little more in earnest on an unemployed budget, and once I finally scored a job, I started to broaden my horizons on collecting. It didn’t seem unreasonable to spend a couple hundred bucks on a single book anymore, but I had no idea how fast things were about to change from there.

Flash forward to June 16, 2019, and I’d overspent on books, again. There was an interesting auction coming up, and I was trying to scrounge for funds at the time. Suddenly, it hit me, what better way to make some quick money, then to sell a book I wasn’t quite so attached to anymore, at discount pricing? “Delightfully devilish, Zubairul”, says I. That said, I tossed up an early 17th-century theological text on my new Instagram account, and figured I’d wait a while before any messages came in. I did not expect to sell it within 24 hours, let alone to another dealer. But I will say this, the day I sold a book to Aaron Beckwith of Capitol Hill Books (swell guy by the way, and so are all the other people I’ll briefly mention), is the day I knew I wanted to become a bookseller. Were it not for that quick sale, I don’t know if I’d have ever gotten the motivation to start selling books. After that, I tried repeating my luck with some online purchases, from dealers in various destinations, as well as estate sales and auction houses I’d never even heard of. I had little to no understanding of what exactly I wanted to buy, other than “I recognize that title”, and “ehehe this binding is very pretty and I’m sure others will think the same >:3”. Although this was basically akin to tossing a handful of darts blindfolded, the results were mostly positive, though without any prior experience or training, there were definitely a few key things I didn’t quite understand during those early weeks. Collation? Never heard of it. Sending books AFTER I get paid? Now there’s a real galaxy brain idea, and I’m still owed for a couple of those super early invoices. There was a fair bit to sponge up and absorb at the beginning, that’s for sure.

When did you open That Guy with the Books and what do you specialize in?

I officially gave the shop a name five months after my first sale, so that was November 2019. I tend to buy just about anything for the shop that catches my interest, but my focuses are on theology, literature, illustrated works, special or otherwise fine bindings, and material from the 15th to 17th century in general. I’ve also been building a section on Japanese works from the Edo and Meiji Eras, but it’s been slow work finding the right material. In short, I’m just a guy who sells rare books, and rare book accessories and ephemera.

I love the thrill in finding new books for the shop, and occasionally there’s that momentary high you get when buying or winning something special, or just even getting to compete for a remarkable book or manuscript. I love the people I get to meet and/or befriend, and not just the other booksellers, but the collectors themselves, the librarians, and everyone else. I never dreamed I’d be working in a field with other folks this dedicated to the trade. Each dealer brings something different to the table, and I always get to learn something new or different from each of them. That’s the other thing too, just how much knowledge you can pick up along the way. When I work in tech support, there isn’t a whole lot more I can learn for the job beyond what I learned in the first few months, other than the occasional module or PowerPoint. But as a bookseller, I’ve got avenues going in all sorts of directions. I can tackle as much as I want, and stack on even more until I hit my breaking point. I might’ve picked up a bit in the past two years, definitely a fair chunk of info compared to the average 26-year-old book collector or dealer, but that’s just a couple drops in the bucket compared to everything else I have yet to find out about.

Depends on the day, but typically I wake up after hitting the snooze on my multiple alarms a couple times, check my to-do list and emails to respond to, and usually dive into new purchases to make from there. Sometimes I wake up at 5 am for a new sale wishing I’d just set the absentee bid instead of trying to stick it out through the entire thing live. After that’s wrapped up, I run mental gymnastics on whether I’d like to catalogue existing books or sleep in before my day job starts. It’s usually the latter, and then I slog at that for a few hours, wrap up occasionally drained, and go back to the job I significantly enjoy more. I’ll start packaging and mailing off orders after that, and then a significant portion of my day is a mix of cataloguing, photographing, trying to source more material, and making some sort of social media posts for the shop.

Not the easiest question to answer, but I’ll split it down to the neatest books I’ve ever owned and handled in the cozy comfort of my former bedroom/current office, versus anywhere else outside of that.

The number one favorite so far has been an early 16th-century Book of Hours from the workshop of the Hardouin Brothers, with hand painted metalcuts and some of that sweet, sweet initial work throughout. That was the second Book of Hours I’d ever bought in my life, which was just earlier this year. My first Book of Hours I also coincidentally bought in 2021. A close second to that would be a mid-16th century antiphonary from Spain, which was also the first antiphonary I’ve ever held or owned as well. 2021 has been a lot of firsts.

If we’re talking books handled outside of the shop, it’d have to be a second edition copy of De Humani Corporis Frabrica at the Thomas Fisher Library, being Vesalius’ personally annotated copy, and a 1493 printing of Schedel’s Liber Chronicarum. That place rocks, and I’m grabbing a table to study some illuminated manuscripts once they’re open to the public again.

I don’t plan on buying any books for myself until I’m a little more established, but I do have a shortlist of works to go into my permanent collection for the future. There’s Topsell’s Four Footed Beastes, a couple really specific cartonnage bindings, literally any early copy of Paradin’s Devises heroiques, and a few more titles. Other than that, I like to collect ancient coins, and I’d like to start collecting art at some point too, but I’m saving that for when I have a bigger office. I also like collecting zines, and the occasional one-shot graphic novel. My favorite has to be the Nicolas Cage Coloring Book.

Still trying to sort out the balance between work and non-work times, but I like to go on park trails, exploring the city, relaxing at the nearby teahouse, and connecting with new and interesting people, as well as loved ones. I’m still a bit of a geek at heart as well, so I’ve been spending some free time on Age of Empires III and the occasional show of the month. Once the pandemic is over, I’d like to play Magic the Gathering with my friends again as well. It’s been a few years, and I think it’d be fun to get back into it.

Ever since I’ve started as a bookseller, I’ve seen a new wave of other dealers and collectors make their appearance in the book world. Demographics are getting significantly more diverse and inclusive as well. Hell, I’m seeing way more queer and people of color representation than I was 10 years ago. I can also personally attest that social media has really changed up the playing field on how booksellers can engage with folks, clients or otherwise. Most of my friends used to have a cliched idea of what bookselling and collecting was all about, and there was an inherent vibe of gatekeeping preventing folks from getting into it. But as a bookseller, we can market ourselves how we want, present ourselves as authentically as we like, and not only has that opened up their viewpoints, but in my opinion it’s the best way to bring new folks into the world of books. If you just look at Instagram alone, there are a bunch of bright and burgeoning booksellers from backgrounds of all kinds and trying out all sorts of things. Olson Rare Books, Sparrow’s Bookshop, Vellichor Place, and those are just a tiny handful of the massive wave of new and creative booksellers in the last 3-4 years. I’ve been inspired and motivated by some of them, and I’m proud to know I’ve done the same for others. Quite a few dealers from previous generations are doing swell with adaptive and innovative approaches to selling, and sure, there are a few folks who are comfy with sticking to their tried and tested methods, but the thing about the trade is that you’re free to do as you like. I have absolutely no idea what could happen with the generations down the line, and I don’t even want to factor in the state of the world right now, but things are looking pretty optimistic right now when it comes to the book trade.

I’ve managed to reach a semi-regular state of monthly catalogues which shocks me, and I just recently launched my latest catalogue in June. The title is Big Chungus, and if that doesn’t make you think of Books of Hours and early printed material from the 16th century among other things, well, yeah, I don’t think anyone else got that impression either. Not the best with titles, but I hate resorting to generic ones, and Allie Alvis had the best timing in suggesting that while I was brainstorming. July is all about cartonnage romantique bindings. Fun 'lil 19th-century French bindings for just about any type of budget. August might as well be a mystery box right now.

I’m mildly/very fatigued from selling at and attending virtual fairs, so those are and have been on hold for a while. Once the pandemic blows over, I’m really hoping to get a booth at the Toronto Antiquarian Book Fair, whenever the next one comes round anyhow.