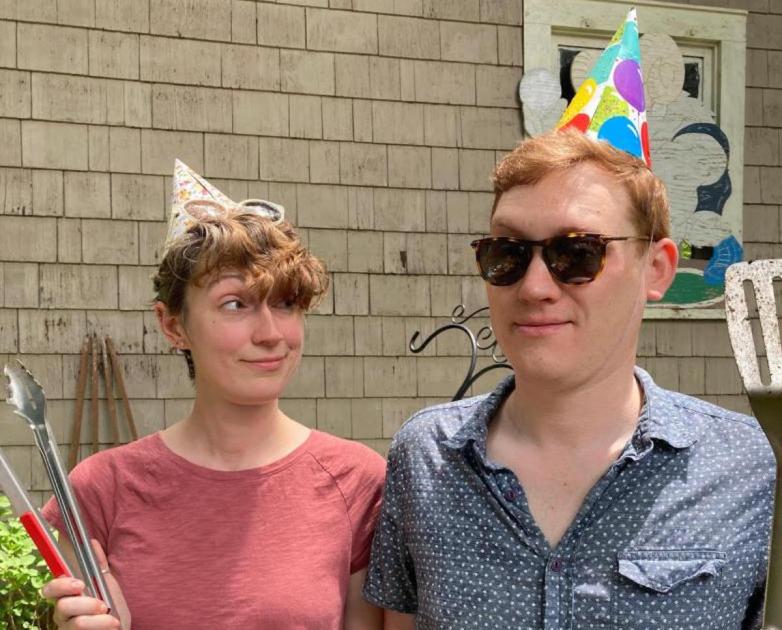 Ten years ago this month we launched our "Bright Young Things" series with a profile of Teri Osborn, then working for William Reese & Co. in New Haven, Connecticut. In its early days, the series focused on young booksellers, but quickly expanded to include librarians and collectors as well. To date, we have profiled 97 booksellers, 94 librarians, and 48 collectors, for a grand total of 239 interviews. It seemed appropriate, for our 240th entry to check back in with Teri Osborn, now partnered with James McBride (himself a 2017 entry in the Bright Young Booksellers series), as proprietors of McBride Rare Books in New York City.

Teri: I was a rare book librarian in a former life. I went to library school because it was very practical and I would be employable. A friend said to me, "Hey, you should take this course on rare books with me," to which I replied, "That doesn't sound very practical." But I did take the course and have been smitten ever since. And I've been fortunate enough to work as a rare book professional since I graduated in 2005. I spent three years in libraries before serendipitously landing a job at the Reese Company and have never looked back. Bookselling suits me in a way that academic librarianship never did.

James: I started out hoping to go into rare book and special collections librarianship. I did a Library and Information Science degree at the University of Texas at Austin and also completed a second Master's degree in Book History at the University of St. Andrews in Scotland. While I was at Texas, I also worked as a rare book cataloguer for the Harry Ransom Center, working on 16th century Italian, mostly Aldine imprints. I thought that I would find a library position as a Rare Books Cataloguer when I returned to the States from Scotland in the fall of 2015, but Bill Reese hired me instead.

How did this new partnership come about?

Well, the short answer is that we were sacked without warning in August 2018, several months after Bill passed away. So all of a sudden we had to figure out what to do next.  Teri almost took a job as a private librarian and did some contract work for Swann Galleries and University Archives, but in the end, we decided that we were booksellers and we would make a go of it on our own. We had zero inventory, but we did some scrambling and managed to put together a booth for the Boston Shadow Fair that November.

When did you open McBride and what do you specialize in?

We started selling books on our own in September 2018 and officially incorporated as McBride Rare Books the next month.  We deal in what we call “eclectic Americana” – unusual books and imprints, archives, ephemera, photography, and we try to stay away from too many of the standards.  Our areas of focus have become the American West and Latin America, though we still cast a wide net – our inventory currently contains material relating to all regions of the Americas from the 17th to the 20th centuries.

What are each of your roles at McBride?

James does most of the cataloguing and keeps an eye on auctions, dealer lists, and other sales. Teri sort of does everything else – bookkeeping, photography, handling email inquiries and correspondence, invoicing and packing orders, preparing our lists and catalogues, organizing book fairs, plus buying and cataloguing when there’s time or we’re in a crunch prepping for a fair. We are in awe of people who operate on their own – there’s so much to do and only so much time!

How has the transition been from employee to shop owner?

We are compelled to point out here that when you asked Teri ten years ago if she wanted to open her own shop someday, she simply replied, “Nope.” It has definitely been interesting. There was a steep learning curve at the beginning, but it’s been really neat to see how much we’ve grown and evolved even in just three years.  Our buying is more fine-tuned, we’re willing to take bigger, more educated risks. We recently rented an office space, which is a thing we never envisioned doing, even a year ago.

Describe a typical day for you at McBride:

Teri is the morning person, and starts the day several hours early with a to-do list. It usually starts with any bookkeeping that needs to be done, invoicing and packing orders, photographing new inventory, and thence onward.  That could mean one day she’s doing photography for most of the day, and another day she’s editing cataloguing and laying out a new list of material for sale. James comes in later in the morning to catalogue, prepare lists, review auctions, etc., and is the evening person, so is much more likely to sit around at night reading auction catalogues while the Mets lose.

One of the coolest things we’ve handled was probably an archive of patient records from the Bloomingdale Insane Asylum here in New York. It was several thick folio ledgers – men and women – from the late 19th century, and about half the volumes were illustrated with photos of the inmates.  It was astounding and also very disturbing.  More recently, we sold a copy of the 1823 Mexican Imperial Colonization Law, which was used by the provisional government that followed Iturbide to authorize Stephen F. Austin’s first Texas colony.

Maintaining any personal collections these days? Have time to enjoy any hobbies outside of work?

Teri still collects Indiana-ana, though acquiring less than previously. She also recently added a first edition of Sirens of Titan to her Vonnegut collection, which was a real high spot. James collects early American editions of Classics and imprints relating to Latin and Greek language.

Thoughts on the past 10 years in the book trade? Thoughts on its future?

Things have evolved so much in the past decade. Collecting areas have shifted, there’s a real emphasis on ephemera and paper now that was not as prevalent a decade ago. And because we’ve moved forward in time, the date ranges in which libraries are collecting have also shifted forward – we handle much more 20th century material than we would have ten years ago.

We feel bullish about the future. Our big news is that Joe Fay, also formerly of the Reese Company, has just joined us at McBRB. A changing of the guard in the world of rare book dealers seems to be gathering steam, and we intend to be at the forefront of the Americana market. Joe joining us absolutely makes that possible.

We have also just issued our first printed catalogue, which is another thing we never expected to do. It’s off to a good start and thus far has been well received. If we sell a few more things, we might even issue a second one at some point.