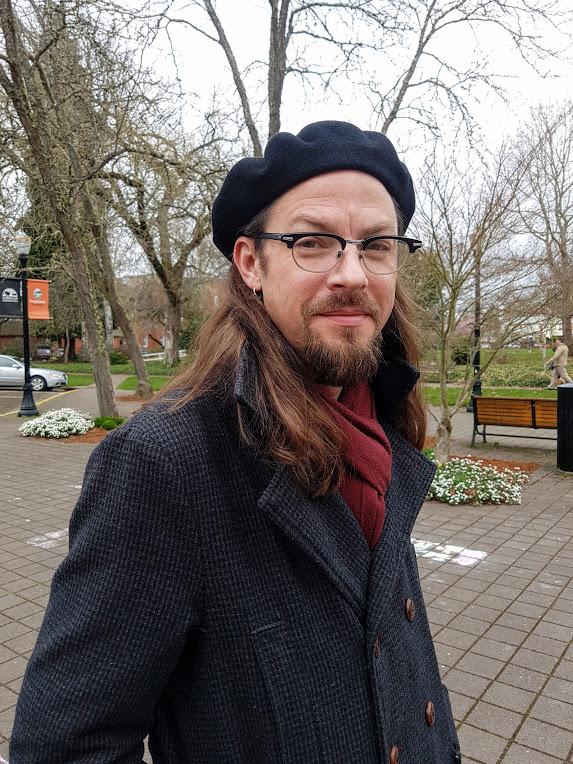 Mainly through chance and unemployment, although I would like to think that my father unknowingly planted the seed. He was my sixth grade teacher, and one day when he passed out the monthly book order forms to the class, he quietly told me to pick out what I wanted and put it on his desk. I tried to keep myself under control, but must admit that I may have taken advantage of his unexpected generosity in order to try to collect all of the Sherlock Holmes books. Many years later I started college as an English major, which made sense to me given my love of reading. After that first year of college, I moved to Oregon, and began to question whether teaching literature was really my calling. I spent the next few years working in a coffee shop while wondering what I really wanted to study, the main problem being that too many things appealed to me. In 2001 when I was between jobs, I noticed that a local book store was hiring. It wasn’t what I was necessarily looking for, but decided to apply as I was quickly running out of money. I was initially hired as a clerk, but within a few months was given the position of used book buyer. My collecting compulsion kicked in, and I ended up spending a good portion of each paycheck on a bag full of books. It wasn’t long until I started being more selective by seeking out first editions and signed copies of books by the authors that I loved. I became more and more interested in rare books and book collecting itself, and started reading up on the various aspects of the book industry and rare book trade. In the meantime, I finally returned to school in 2003 as a Philosophy major, and focused on Tibetan Buddhist Philosophy and started studying Classical Tibetan. My plan had been to get a M.A. and PhD. and then teach Asian Philosophy, but within a few years of graduating, I began to question my path yet again. After I attended the Seattle Antiquarian Book Fair for the first time, I realized it was all over for me. Working with books was my passion, not a life in academia. It was then clear to me that if I ever went into teaching, I would spend my career longing for retirement and the chance to sell books again.

When did you open Munster & Company, and what do you specialize in?

My wife Jessie and I started the company in the autumn of 2017 when we bought Black Oak Books, formerly of Berkeley, California. We filled three massive freight trucks with boxes of books and shelving and had it sent up to where we live in Corvallis, Oregon. As we are currently sitting on thousands of uncatalogued books, I would have to say that for the time being we are generalist booksellers. In the coming years we hope to focus more on our interests and strengths, which are British, European, and Asian literature; Buddhist philosophy (primarily Tibetan); textiles and textile arts; oppressed peoples; and accounts of ordinary people in extraordinary situations, with a special focus on material relating to the Holocaust and the various partisan movements during WWII. I also have a keen interest in people who do good works, and hope to start collecting material related to Mister Rogers and other people who are simply and inexplicably good.

Definitely the people and the variety of the material that we get to work with. I can point to just two times in my life when I felt that I was finally in a place where I actually belonged, and one of those times was when I attended the Colorado Antiquarian Book Seminar in 2015. I had found my clan, so to speak, and was suddenly among people that were just as passionate about working with books as I am. Despite the huge variety in interests, we all shared the same excitement for what we do. That feeling of belonging comes back every time I’m at an antiquarian book fair and get to spend time among colleagues, who are some of the nicest people I’ve ever had the honor of calling friends. The customers are wonderful as well, and I love having the chance to share something that they might find exciting, regardless of whether or not it ends in a sale. Being someone that can get interested in just about anything, the sheer breadth of material satisfies my curiosity and need to constantly learn something new. If I went into academia, I would have had a hard time keeping a narrow focus for several years. With the book trade, however, I can focus on a number of areas, and keep adding as my intellectual appetite demands. Bookselling is nearly infinite, and even after nearly twenty years of working with books, I can’t see myself ever possibly getting bored.

My wife and I have two children; a four year old daughter and a one and a half year old son.  The day starts with trying to get everyone out the door before 8:30 when the kids need to be at their daycare. After dropping them off, my wife and I head to the office. Processing orders and answering inquiries happen first, and then any other pressing emails are dealt with. After that, I can usually focus on cataloguing or research until just before noon, when we leave to pick up the kids.  Once my wife and the kids are settled at home, I walk back to the office for a bit more cataloguing and/or research. I always package orders for shipping around 3 pm, and then walk them to the post office at 4 pm. After that I can be cataloguing, photographing books, or agonizing over something interesting to say in an Instagram/Facebook/Twitter post, which I try to do at least once a week. When the weather is conducive, I go out to our storage units for a few hours to look for promising material to catalogue. At 6 pm I walk home, make dinner, and then my wife and I get the kids to bed.

Although I can’t say that I have ever had any interest in Americana, I think my personal favorite from the past two years is a handful of letters written by John, Abigail, and John Quincy Adams.  They had been sitting in a box in the office for over a year, when I decided to have a closer look at them. Up until then I hadn’t bothered to give them more than a cursory glance or see who they were written by; they were merely American letters that I would deal with at another time. Little did I know that I was holding John Quincy Adams’ earliest known confession of love for Mary Frazier, whom he courted when he was twenty-three years old. I spent three solid weeks transcribing them, researching content in the letters, and studying up on the Adams family. I ended up with a completely unforeseen admiration for the Adams family. A close second is a pair of Emily Dickinson’s First and Second Series of poetry that were owned by the author and progressive journalist Elia Peattie. Although I’m still working on determining whether or not they were actually inscribed to Elia by their editor, Mabel Loomis Todd, they have sent me down several fascinating rabbit holes in regards to the life and work of two utterly fascinating women.

I must say that I haven’t really added much to my own collection since starting Munster & Company, focusing instead on selling rather than collecting for myself. I have, though, been trying to recreate and improve upon my first collection of British and European modern firsts, Holocaust memoirs, and religious studies, which had a strong emphasis on Tibetan Buddhist philosophy.  I’ve always collected what I enjoy reading, out of both interest and pleasure, and am always on the lookout for anything by or associated with my favorite author, Italo Calvino. Unfortunately my first personal collection which consisted of hundreds of titles was destroyed in a fire just over ten years ago. Since then I’ve tried to collect better copies of what I once had, and also expand on what I originally possessed.

Our children are fairly all-consuming little creatures, but I really wouldn’t have it any other way.  I love spending time with them, and look forward to the day when I can send them off to clean cases at book fairs. When they are finally down for the night, my wife and I indulge in lying on the couch, drinking hot chocolate and snuggling the cats while watching a nice British or European crime drama. We party pretty hard at Chez Munster. When the season is right, I enjoy helping Jessie in the garden, which is an ongoing project. I enjoy walking to and from the office, and relish having a bit of solitude to get locked inside my own head in order to troubleshoot problems, come up with new ideas, and fantasize about the minutiae of future projects. We hope to have an open shop some day after the kids are in school full-time, so I spend a great deal of time imagining what that shop will be like.

It’s a pretty exciting time to be a part of the book trade. Actions are being taken to make the trade more inclusive, and so I’m looking forward to seeing how the trade becomes more diverse in the coming years. A newer generation of booksellers has been introducing some exciting and creative ways of presenting and selling material. Contact between booksellers through social media and email has increased communication, fostered collegiality, and improved security in the trade. As we face the uncertainty of how to attract the interest of new generations of potential collectors, the benefits of inclusion, creativity, and communication will be paramount in keeping the rare book trade alive and relevant. Although I can’t say with any certainty what things will look like in ten or twenty years, I have tremendous faith in the abilities of my colleagues and their willingness to adapt.

It will probably be another year or two until we’re ready to issue a proper catalogue, as we still have a lot to do get the business built up and on sound footing. I’ve only just started mentally playing with a design idea for our first catalogue, and my creative process can be a bit slow and requires a lot of gestation. As for upcoming fairs, we will be exhibiting at the Rose City Book & Paper Fair in Portland in June and the Seattle Antiquarian Book Fair in October as usual. Beyond that we haven’t made any definite plans, although we do try to have a booth at the Rare Books LA fairs when possible.