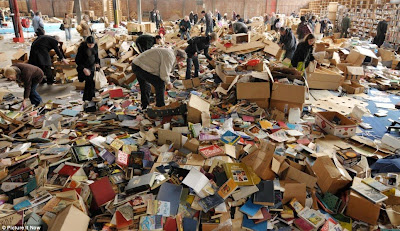 This is the scene inside a warehouse in Bristol, UK. The warehouse used to be the home of Bookbarn, Amazon.UK's largest supplier of secondhand books. Now it's a biblio-wasteland.

After their lease was up Bookbarn moved out leaving millions of books behind. The landlord then decided to invite the public in to take whatever they wanted. Ashley Nicholson, the director of the property, said 'We thought it was a sensible idea to give people the opportunity to come along and choose themselves a book or two and help us clear the warehouse." The thought of free books had people coming from far and wide. Nicholson added 'The response has been unbelievable since we opened it to the public. It's like a swarm of locusts." 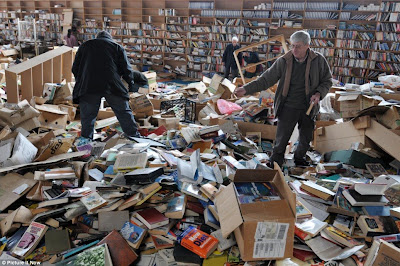 Is such a tragic scene a direct result of the race to the bottom pricing mentality of the penny sellers that infect many of the online marketplaces? Where value is sucked out of many perfectly good books until they are rendered 'worthless'. What a shame.

Do you think they'll get their security deposit back?

More at the Daily Mail online

Note the Bookbarn is not to be confused with Bookbarn International