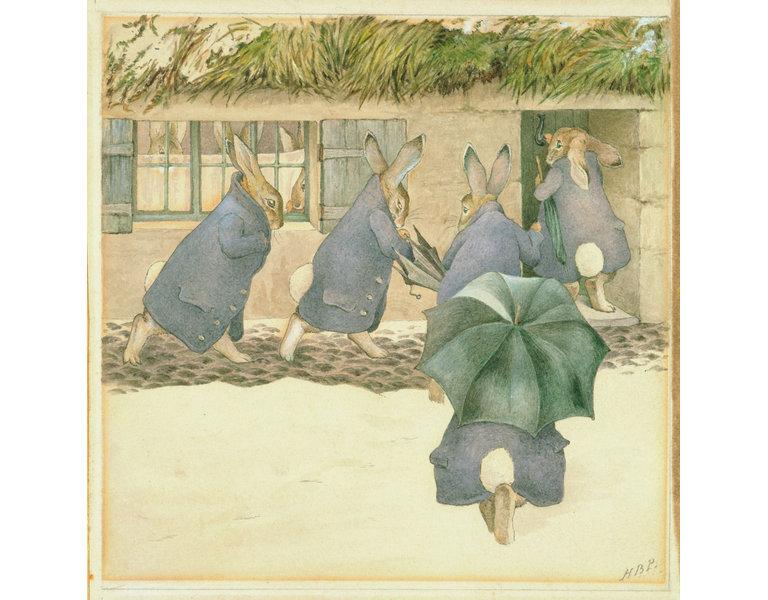 Courtesy of the V & A Museum

The Rabbit Christmas Party: The Arrival, c. 1892, in watercolor, pen and ink.

An exhibition highlighting the early childhood art of Beatrix Potter (1866-1943) and comparing it to her prolific adult oeuvre enters its final furlong at the Victoria & Albert Museum in London this month.

Potter’s parents encouraged her art and arranged formal drawing lessons for her from the age of twelve, although she was sketching regularly from the age of eight. Already at this age, she was particularly inspired by the plants and animals around her and became a keen visitor to art galleries during her teenage years, particularly admiring works which she said were “drawn with design.”

Beatrix Potter’s Art: ‘drawn with design’ features the artist and writer’s early representations of mice (here wrapped around letters of the alphabet), a variety of insects, and her sketchbook from 1876 featuring a leaping gray squirrel and various rabbits on sleds. Rabbits are, unsurprisingly, to the fore including the The Rabbit Christmas Party: The Arrival (c. 1892, pictured above) in watercolor, pen and ink, which she gave as a present to her Aunt Lucy, Lady Roscoe. This is part of the museum’s Leslie Linder bequest of Potter’s art, letters, photographs, manuscripts, and other memorabilia, the world’s largest collection of such.

In addition to illustrated letters to friends in the 1890s, the exhibition also features an example of the tiny post box and letters, including imitations Penny Red stamps, which she produced and sent to friends during her childhood.

The exhibition remains on view through November 17.