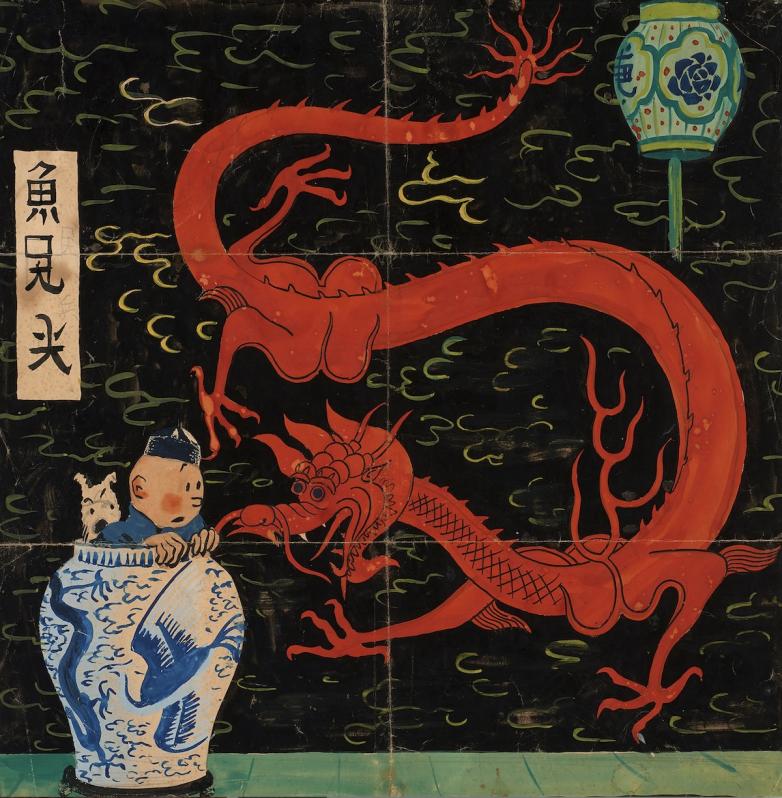 Hergé (Georges Remi). The Blue Lotus (details). India ink, watercolor and gouache on paper for the initial cover of the album The Blue Lotus published in 1936. The publisher had to refuse this cover as it was too expensive to print at the time. Estimate: €2,000,000 -3,000,000

Paris - In its Comic Strips sale on November 21, 2020, Artcurial will reveal an exceptional and highly original item: the artwork by Georges Rémi, known as Hergé, designed for the cover of the 1936 album Le Lotus bleu.

Deemed too costly to reproduce with the four-colour technique used in 1936, the design was turned down by the publisher Casterman. This original artwork, new to the market, has been rediscovered today by Artcurial. Hergé gave it to the young son of publisher Louis Casterman. The boy kept it tucked away in a drawer, carefully folded in six.

This initial cover design for Le Lotus bleu, Tintin’s fifth adventure and the album that marked a turning point in Hergé’s career, is undoubtedly one of the most evocative covers of any of the young reporter’s adventures. After becoming friends with Tchang Tchong-Jen, the only real person other than Al Capone to be incorporated into the adventures of Tintin, Hergé’s style changed, becoming more assured.

This artwork in Indian ink, watercolour and gouache on paper is estimated at 2 – 3 M€ / 2.3 – 3.4 M$. It will be presented across Europe, exhibited in Artcurial’s gallery in Monaco from 15 July to 11 September, in Brussels from 22 September to 2 October, in Munich from 3 to 6 November and finally in Paris on 19 and 20 November, before coming under the hammer on 21 November at Artcurial.

The leader in this field, Artcurial currently holds eight of the top ten auction prices for work by Hergé, including the world record price for a comic strip drawing by any artist, achieved on 24 May 2014 for the inside cover pages of a Tintin album (2.6M€ / 3.6M$). The sale of the rare and unique artwork for Le Lotus bleu promises to create a stir once again, for the delight of all fans of the 9th art.

“This artwork is a genuine masterpiece encaspulating Hergé’s genius and is probably the most beautiful Tintin album cover ever!” —Eric Leroy, Expert Comic Strips, Artcurial