After seventy-five years, Riverdale's perennial heartbreaker Archie Andrews got a major makeover. Archie Comics tapped Eisner Award winner Mark Waid ("Daredevil" series) and "Saga" illustrator Fiona Staples to revamp characters who have remained virtually unchanged since their appearance in 1941. The updated look debuted at ComicCon in July, and there's no mistaking it, Archie is a hot dude. The cover shows young Mr. Andrews stepping out of his (slightly messy) car, looking happily off scene, hair perfectly coiffed, jean jacket tousled just so. Put him in a suit and swap the jalopy for a limo, and you can almost hear the squeals of delight from girls waiting behind velvet ropes for their favorite teen heartthrob to arrive at his movie premiere. Everything screams sexy all-American dreamboat. And why not? He's been dangling poor Betty Cooper and Veronica Lodge along for almost a century, he ought to look the part of handsome stud. It's not just Archie; everyone is really, really, ridiculously good-looking in the update. (The second issue cover shows a particularly forlorn but beautiful Betty, trying to decide which rebound outfit to wear.) This first issue is an origin tale of sorts, where Archie and Betty have been longtime sweethearts until the mysterious "lipstick event" tears them apart. While the lovebirds are separated, the billionaire Lodges move into town, and though we don't meet Veronica in issue 1, she's sure to turn heads shortly. 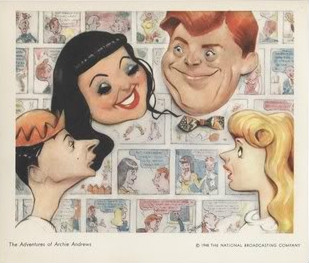 As with most makeovers of major brands, there are significant financial reasons behind Archie's stronger chin and dreamy eyes. In a Publisher's Weekly  interview last year, Archie Comics CEO Jon Goldwater said that the new look keeps the characters relevant and also feeds Archie book sales, which account for a major portion of the company's revenue. Goldwater noted in the article that bookstore sales of Archie titles have increased 736% since 2008, reflecting the publisher's introduction of over fifty new titles from 2010-2014.  The company has big plans for 2016, with a TV special, a musical, and more book events to celebrate 75 years and over 2 billion issues sold. Not bad for a freckle-faced teenaged Casanova.
Related articles